So, James Gunn’s The Suicide Squad is neither a sequel nor a reboot to 2016’s Suicide Squad, according to co-star John Cena. Curious, but interesting. The original film was an incoherent mess, but grossed nearly $750 million worldwide. The early reviews for Gunn’s hyper violent not-a-follow-up have swung the other way, with a 96% on Rotten Tomatoes and a 77 on Metacritic as of this writing. That’s good, because there’s no shot the R-rated new film matches the original in ticket sales.

With nearly 15% of North American movie theaters still closed and foot traffic still at a trickle as opposed to a steady flow, the theatrical rebound has been slow going. The Suicide Squad sounds as if it’s must-see appointment viewing for superhero fans (and DC should offer Gunn control of the DCEU when he completes Guardians of the Galaxy Vol. 3 for Marvel). But the film is also opening day-and-date in theaters and on HBO Max. Outside of March’s Godzilla vs. Kong, that has put something of a financial ceiling on Warner Bros.’ 2021 movies. On the plus side, it has made the studio’s films more widely available to a greater cross section of audiences who may understandably be wary about retuning to theaters.

Here’s how and when you can catch The Suicide Squad on HBO Max.

When Does The Suicide Squad Release?

The Suicide Squad will hit theaters on Friday, August 6, but be made available in a special Thursday night preview via HBO Max on Aug. 5. Based on HBO Max’s release track record this year, the movie should appear on the service at 12 am PT/3 am ET.

UPDATE 8/4: WarnerBros has announced that The Suicide Squad will debut on HBO Mx Thursday at 7pm ET.

How Can HBO Max Subscribers Watch The Suicide Squad?

Just fire up the streaming service and click play. But, importantly, only users who subscribe to HBO Max’s premium plan—$14.99 per month—will have access to the feature film. Those operating on HBO Max’s ad-supported tier ($9.99 per month) will not be able to view the film.

Also important to note: The Suicide Squad will only be available on HBO Max for one month, meaning you’ll have to watch it before September 5 lest you want to wait for it to reappear on the streaming service months from now.

The Suicide Squad Cast and Plot

Here is WB’s plot synopsis for the standalone sequel:

Welcome to hell—a.k.a. Belle Reve, the prison with the highest mortality rate in the US of A. Where the worst Super-Villains are kept and where they will do anything to get out—even join the super-secret, super-shady Task Force X. Today’s do-or-die assignment? Assemble a collection of cons, including Bloodsport, Peacemaker, Captain Boomerang, Ratcatcher 2, Savant, King Shark, Blackguard, Javelin and everyone’s favorite psycho, Harley Quinn. Then arm them heavily and drop them (literally) on the remote, enemy-infused island of Corto Maltese. Trekking through a jungle teeming with militant adversaries and guerrilla forces at every turn, the Squad is on a search-and-destroy mission with only Colonel Rick Flag on the ground to make them behave…and Amanda Waller’s government techies in their ears, tracking their every movement. And as always, one wrong move and they’re dead (whether at the hands of their opponents, a teammate, or Waller herself). If anyone’s laying down bets, the smart money is against them—all of them. 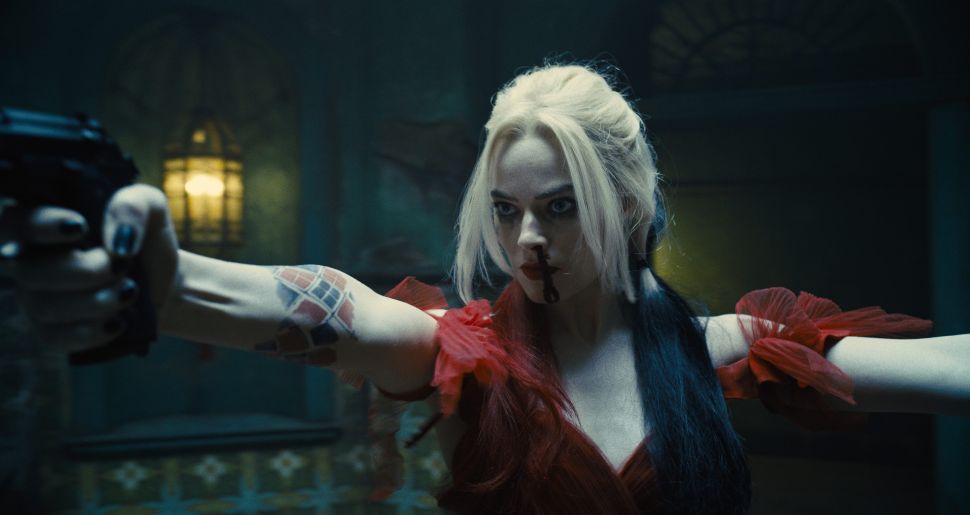