After sketching what would become The Green Knight’s most defining image, an open crown adorned with metal plates and an angelic, vertical halo attached to the back, costume designer Malgosia Turzanska (Stranger Things, Hell or High ) knew right away that this is what they would look like, what she wasn’t sure about, was if it would work. “I was like, how the hell is that gonna go on someone’s head?,” the designer told Observer over Zoom.

Thankfully, for both the film and the A24 marketing department, Turzanska with the assistance of colleague David Samuel Houghton, were able to pull it off, by having Houghton make many cardboard mockups and together, figuring out how the halo should be angled.

The crown and its distinctive halo were featured prominently in the film’s first poster and teaser trailer, which promised that writer-director David Lowery’s (Ain’t Them Bodies Saints, A Ghost Story) epic would be more distinctive than your average medieval fantasy. After over a year long, COVID-induced delay, Lowery’s mostly faithful adaptation of the 14th-century chivalric romance, Sir Gawain and the Green Knight, was finally released to theaters this past weekend, met with almost universal praise from critics and an impressive debut at the box office. In the lead up to the film’s release, we caught up with Turzanska, currently stationed in Hong Kong working on her next project, and talked to her about how she set about designing the striking costumes in the film.

Observer: This is your second time working with David Lowery, the first being 2013’s Ain’t Them Bodies Saints, to start, can you tell us how Mr. Lowery approached you to work on The Green Knight?

Malgosia Turzanska: It was maybe seven months before we started actual pre-production. David sent me the script and initially it seemed like the movie was gonna go very soon, and then it didn’t, which I’m glad for because I had time to actually research and think about it a little bit. I literally stopped receiving and answering any other work calls and just held on to it with dear life, I was like “Don’t even think about anyone else, this is mine.”

I looked at a lot of graves and the metal that was found in those graves and how archaeologists have tried to recreate the shape of clothing from only the placement of pins or buckles.

What kind of research did you do to prepare for this project? Did you watch a lot of other King Arthur adaptations or did you look elsewhere for inspiration?

I watched a bunch of films, but I feel like what was most crucial for me were the paintings and the remnants of metal. We had a whole metal workshop in our costume workshop. I wanted to go deeper than the story. The story was written, theoretically around the 14th century, but the legend is set earlier in the sixth century, so I decided that it would be more exciting to go in and start deeper, see how clothing worked then.

I looked at a lot of graves and the metal that was found in those graves and how archaeologists have tried to recreate the shape of clothing from only the placement of pins or buckles. It’s like ghostly clothing, so that was really exciting for me. The metal then got translated into the milagros (charms) that are covering the Queen’s dress, and the votive plates that are covering the king’s cape. Metal as a storytelling device was definitely with me throughout.

The crowns Arthur, Guinevere and Gawain wear are perhaps the most distinctive crowns I’ve ever seen. Was that always the design of the crown or did you try different versions before settling on the one we see in the film?

The crowns I’m very thrilled with, because it was something that I knew from the very first drawing that this is what they would look like. It started with me looking at very early medieval imagery of saints and the representation of halos. I actually studied art history before I started with costumes, so it was nice to go back to my previous life for a bit. Here the king and queen are treated almost as divine beings and I wanted to emphasize that divinity. I’m thrilled it came to life because at first I didn’t know if someone could move while wearing it, but it worked.

What went into the design of the saffron cloak Dev Patel’s Gawain wears once he goes on his journey?

The fun thing about the cloak he wears is that it is quilted in the shape of a magnified thumbprint to show him as an individual. So much of the script for me was about individual choices and free will versus fatalism, so even though we see him follow through different storylines, this is still about one person and that this is his story.

Weirdly enough, we chose the color when we were already in Ireland, and there is this invasive plant called gorse there, and it was exactly that yellow. We can see it several times during his journey as there are fields and hills that are covered in it, so it all connects. That was unintentional but it happened, so I’m very happy with that.

What was the process in designing the armor for the Green Knight?

That was actually a huge process and we ended up bringing an illustrator who was translating both what I was doing and both what Barry [Best] was doing with the mask and the prosthetic hands. I wanted him to feel more ancient than everything else in the movie, someone that is from a world that has either ceased existing or has had more of a lifespan than where the story takes place.

I based his armor on deeply ancient armor that is now so corroded that you can’t quite see the pristine shape of the plates. For the inscription on his armor, I used the Sabaic alphabet [ a South Arabian language that was spoken between c. 1000 BC and the 6th century AD] because it was an ancient alphabet which you know is not not used anymore. So if anyone wants to pick up some basic Sabaic, they can read what I wrote there.

One of the textiles that I found was this barkcloth, this thin layer of fiber that is between the trunk of the tree and the bark. So he is literally made of wood, which I love.

One more thing that I’m very proud of is that his cloak is actually made of tree bark. David is vegan, so going into the movie I decided that we would not use any leather or any fur in the costumes that we’re building. So I started looking for leather alternatives that are not just made of plastic. So one of the textiles that I found was this barkcloth, this thin layer of fiber that is between the trunk of the tree and the bark. So he is literally made of wood, which I love.

That’s incredible, I’ve never heard of clothing being made out of tree bark before.

In multiple countries, this has been used for centuries, especially in Uganda, where this one came from. We just stitched pieces of this textile together to make this giant cloak and I actually ended up rubbing baby lotion into it to shape it into what I wanted it to look like, it was a labor of love.

Alicia Vikander plays two roles in this film, Essel, the sex worker who is in love with Gawain, and Lady, the wife of Joel Edgerton’s Lord who tries to seduce him. How did you go about crafting costumes for one performer playing two vastly different kinds of people?

That was such a fun challenge because there’s on opposite ends of the spectrum. Essel’s costume is a very simple dress that is just essentially a rectangle. For Lady, her costume was inspired by the castle where we shot, which is a neo-gothic. It was truly an amazing place, it is so heavily decorated and especially the ceilings, they’re so intricately designed and carved, so I took a lot of inspiration from that.

That actually came out of my research. It turned out that in many towns people who were considered unclean like prostitutes or considered crazy were forced to wear bells on their clothing so that they could alert other citizens to their presence. I told David about this, and he wrote it into the script, that made me very happy.

The most important piece of clothing in the film is actually one of the most simple and that is the girdle, Gawain’s mother (Morgan Le Fey in Lowery’s adaptation) gives him to protect him from harm. Is the girdle we see in the film the way it always looks or were there more, detailed versions that didn’t make the cut?

This is the one piece that has changed from the initial design to how it actually ended up looking. Initially we went with different greens and included some gemstones, but it just didn’t work. David kept saying, “something is off,” and I kept trying to make it work and it just wasn’t wasn’t happening. So we started from scratch and made it very simple. It still has a gold thread through it but the whole idea became that the magic is actually, on the inside.

So much work goes into every costume so I understand why it may be difficult to pick favorites, but is there one in particular that has stuck with you since finishing production?

I do love the costumes of King Arthur and Queen Guinevere. Winfred was one of my favorite characters to dress, because even though she’s in this story for such a short time we had many changes for her, but honestly, I think the thumbprint cape is one of my favorite things. My husband claims it’s his thumbprint, so we’ll say that, but it’s one of my favorite costumes because it feels like a little piece of me as well, that I literally put my fingerprint on this. I kept one.

Interview has been edited and condensed for clarity.

The Green Knight is in theaters now. 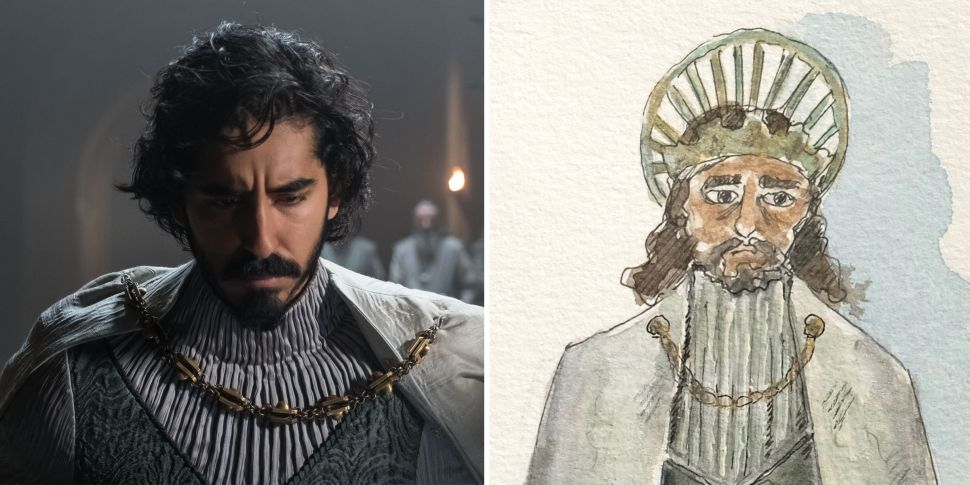