My fertility is waning. I chose to review a book about reproductive rights knowing I will never have kids due to the little blue estradiol pills I take. I’m a trans woman, so I’m sure anything I have to say in support or denial of this book will be read through the lens of the fact I’ve yet to surgically alter my body. I will probably never need birth control—unless in 2060 I can pay Amazon to give me a womb.

Amy Sohn, author of the book in question, has a very different relationship to gender. She wrote a piece about chest binding for the New York Times, including many casually cruel doctors and mothers who found the practice “dangerous.” For years Sohn documented what it meant to be a cis heterosexual woman dating in New York. She was, in essence, a Carrie Bradshaw. I too have attempted writing a dating column, though I knew little about dating and was armed only with anger at being ghosted. I hope if anything on the internet is permanently lost after singularity it is my columns. It’s transphobic if you look them up because they’re under my deadname.

The Man Who Hated Women traces the life of Anthony Comstock, notorious anti-vice activist who fought against obscenity and advocated for what later became known as the Comstock Laws. The book interweaves the biographies of eight women that Comstock prosecuted including Emma Goldman, Ida Craddock, and Margaret Sanger. Attempts at armchair psychology abound.

Anthony Comstock grew up in Connecticut before the Civil War. His family was descended from the first Puritans in New England. In one armchair moment, Sohn dissects Comstock’s childhood through his relationship to punishment. Apparently, young Anthony was forced to retrieve “his own switch” and forced to “sit with the girls, wearing a sun bonnet.” The book suggests we won’t know if this was what “turned him against women, or made him insecure about his masculinity.” Comstock’s masculinity never seems to be far from Sohn’s mind. She suggests he had a neurotic relationship to masturbation. One wonders if even Freud would trace such a direct line.

Eventually, Comstock moved to New York in search of a greater life but found a world hooked on sex. He joined the YMCA and quickly became obsessed with destroying obscenity, tracking down pornographers and abortion providers with a wicked sense of glee. He did not mind using fraudulent means to entrap his victims. Becoming anti-vice royalty was easy for Comstock, he soon joined and led committees to form stricter obscenity laws. These laws eventually became known as the Comstock Act. It wasn’t long until more obscenity laws were passed around the country.

Marriage and its sanctity were a key part of Comstock’s life yet his own wife Maggie is curiously absent from Sohn’s account of Comstock’s life. There is no record Anthony was violent towards Maggie according to Sohn. They lost their first child and a few years later they unofficially adopted a child that Comstock “found,” only for that child to die as well.

One of the women Comstock prosecuted, Angela Heywood, dressed her son in women’s clothing. “Sex radicals” were clearly an affront to God. Blasphemy charges were often unofficially paired with obscenity charges. Comstock was indifferent to many of the women who committed suicide rather than face prosecution. Ultimately, St. Anthony’s power waned only later in life after Margaret Sanger and Emma Goldman changed cultural norms. It was easier to prosecute women like Ida Craddock, a medium and sex educator who claimed to have sex with ghosts. Women like Craddock did not have the support of cheering crowds.

Many sex radicals argued over the difference between “exclusivisits,” free love based on monogamy and “varietists,” those who were essentially polyamorous. Many of Comstock’s repudiations of obscenity were rooted in Victorian purity and a fear of minors gaining hold of information on sexual health, possibly reminding one of the Twitter discourse around kink’s place at pride. It is that arguments about sexuality, reproductive health, and obscenity are continually recycled. Sohn ends her book with a call to action, citing the increasing difficulty to obtain an abortion in some states and the legal challenges before Roe v. Wade.

Amy Sohn started out as a sex columnist writing for New York Press, the New York Post, and New York, writing with joyous effervescence and anger about possessiveness, gender roles, and post 9/11 dating.  In one unpublished test column she quotes Jonathan Ames as saying, “I think what women are looking for is the intimation of the affectionate rape.” She knows how to deliver a tart one-liner, turning a phrase or scene into a denouement of sexual difference such as “She got three martinis and a date with a millionaire. I got a Sierra Nevada paid for by a Republican.”

Sohn’s treats sex radicals and reproductive rights with the aplomb of a former sex columnist, referring to pornography as “Zagat guides for the libido.” On Emma Goldman: “Was it men who were disappointing, or her man?” And, more directly, on Ida Craddock’s sexual experiences with ghosts: “It was the kind of uplifting, mind-boggling sex that makes a person think the world is as it should be.”

This makes the book sound like a fun romp through progressive rights that tells us where we’ve been and how it can indicate where to go. It’s not. Nor is it an activist’s guide to girlbossing the future. Sohn skates over a variety of issues these white women themselves ignored. Goldman and Margaret Sanger’s arguments over birth control and class are boiled down to a difference of opinion. Sohn notes that Goldman helped bail Sanger out of jail but Sanger did not bail out Goldman. She also briefly mentions that Sanger supported eugenics and that she was criticized for her belief in racist ideology (so much so her name was removed from a Planned Parenthood building last year), but Sohn also claims Martin Luther King Jr himself supported Sanger’s work. Sanger also once met with the KKK, though this is not mentioned. It reads like a rebranding of Margaret Sanger’s work despite the fact that she and many free love advocates of her time held deeply racist and ableist ideas around population control.

If there is to be something drawn from Sohn’s book it is the way even activists like Sanger will throw someone under the bus for the sake of political purity. For his own part, Comstock seems like a man hellbent on destroying his own sexual thirst. Clearly he hated women but I’m not sure Amy Sohn proves this in her book. Instead he reads as just another man who wanted to outlaw desire, ghost sex and all. 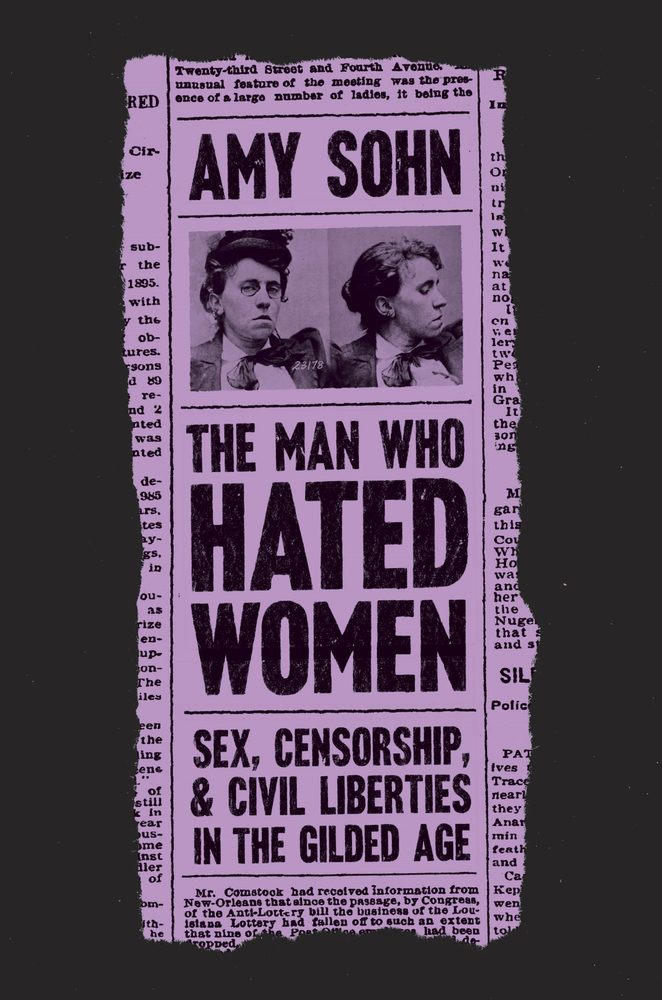