Warning: The following contains spoilers for The Suicide Squad

Few in Hollywood can match James Gunn’s ability to work within the studio system of mega-budget superhero movie-making while still delivering a singular vision that feels uncompromised and distinct. His latest, the not-a-sequel-or-reboot The Suicide Squad, is built around the idea that a crew full of misfits, despite their reputations as badass killers, are really just overgrown clowns with their own sob stories that are easy to laugh with and at. Its characters are fun and, thus, the movie is too. It’s fair to embrace the darker elements of comic book blockbusters as the genre becomes increasingly homogenized. But it’s refreshing to leave the theater after a recent superhero tentpole wanting to immediately fanboy to a friend instead of unload to a therapist.

Gunn is dedicated to keeping Hollywood’s squib departments in business with the oceans of fake blood that he spills in over-the-top gore extravaganzas. The only thing quicker than his lively camera is his itchy trigger finger. But what really makes The Suicide Squad, and Gunn’s approach in general, stand out is that even red shirts destined to be cannon fodder matter to the filmmaker.

Gunn’s winning wit and sickening sensibility is plastered all over the canvas from the first big action set piece like a Jackson Pollack made by Freddy Krueger. He couples previous characters such as Boomerang (Jai Courtney), Harley Quinn (Margot Robbie) and Rick Flag (Joel Kinnaman) with new members Savant (Michael Rooker), Javelin (Flula Borg), Blackguard (Pete Davidson), TDK (Nathan Fillion), Mongal (Maylin Ng) and Weasel (Sean Gunn) to infiltrate the fictitious Central American nation of Corto Maltese solely so he can blow it all up. To paraphrase another iconic DC character, Gunn is an agent of chaos.

The roster of barely recognizable comic book characters drafted for duty in The Suicide Squad is so plentiful that Gunn can immediately cut most of them down in a hail of gunfire without the film needing to stop and catch its breath. This bait-and-switch, plotted by shady black ops maestro Amanda Waller (Viola Davis), opens up the door for the real squad to take center stage. Those brought kicking, screaming, and sleep-deprived on board are Bloodsport (Idris Elba), Ratcatcher 2 (Daniela Melchior), Polka Dot Man (David Dastmalchian), Peacemaker (John Cena) and King Shark/Nanaue (voiced by Sylvester Stallone).

In a sprawling ensemble, Gunn manages to dole out shining moments to each character like Willy Wonka‘s candy man tossing out bars of chocolate. The hilarious banter-laden interplay between characters reveal their defining traits, fears, and motivations as opposed to the music video-style solo introductions that played like a try-hard video game character selection menu in the first film. Themes are woven into their carefully constructed identities and emerge organically throughout their arcs. What we first believe to be straightforward daddy and mommy issues with Ratcatcher II and Polka-Dot Man, respectively, turn out to be more tragic backstories that inform their decisions and growth in the present. Even as Gunn’s stable of expendable misfits grows and shrinks as they seek out some semblance of team work, he takes the time and care for each to pop at least once. Ironically, the hard-R ground-and-pound feature may have the biggest heart of any recent tentpole.

The Suicide Squad tap dances to the genre’s beats in a way that allows it to riff and improvise around its expected melodies. Its third act climax is as uncorked as I’ve ever seen in a mainstream blockbuster as our team of anti-heroes fights a giant alien starfish. Tired: blue sky beams. Wired: whatever the hell is going on here.

Maybe next month’s Venom: Let There Be Carnage will be a leap-without-looking creative left turn from 2018’s financially fruitful but misbegotten original. But until then, I can’t think of another example in which the same characters, played by the same actors in the same shared continuity franchise, received such an antithetical glow-up. (Maybe Thor: Ragnarok?) The rebellious punk-rock with a Xanax and whiskey tone may be the same from 2016’s flatlined attempt. But the execution is elevated, particularly as the new film, free from studio interference like the last one, delivers on Harley Quinn’s formerly empty “We’re bad guys, it’s what we do” thesis statement. They do a lot of bad shit here!

Any movie that features a guy named Polka Dot Man, a talking shark, a rodent-loving millennial, and the other cracked psyches present feels much more like a cross between One Flew Over the Cuckoo’s Nest and Mystery Men than it does anything remotely approaching what a standard blockbuster is today. (It’s difficult not to gape at the valley separating The Suicide Squad from something like 2016’s The Magnificent Seven reboot.) Not every single defining character trait sustains momentum throughout the entirety of the film and some gags deliver diminishing returns as they go. But each face is adorned with the metaphorical battle scars of ethically dubious pasts that would never threaten the the picturesque mugs of the Justice League or Avengers.

Here, Gunn uses his political commentary less like a guiding compass and more like a boxing glove throwing haymakers. Subtle, he is not. Cena’s Peacemaker is a winningly oblivious uber-patriot that doubles as a mouthpiece for the filmmaker’s take on U.S. foreign policy. “I cherish peace with all my heart. I don’t care how many men, women, and children I need to kill to get it,” he says with a straight face. Cena is such a comically large man that the humor is practically baked in. His size projects strength, but his best roles (Blockers, Trainwreck) use his physicality to cover up deep insecurities. Gunn drills into that here as if it were a wellspring of crude oil.

The chemistry between Cena’s Peacemaker and Elba’s Bloodsport as they vie for alpha male team leader superiority is a winning combo. It uses character dynamics to provide both a steady dose of well-earned laughs and the tantalizing whisper of redemption for each. Now this new film isn’t so far removed from 2016’s Suicide Squad in that the entire team’s turn toward the light hinges on a team leader’s connection to his daughter. But Elba brings an exhaustion to the genre — as if even he’s tired of popping up in mega-budget superhero tentpoles — that grounds this new iteration even as he interacts with a CGI shark.

That reminds me: Nanaue is this film’s lovably anthropomorphic Groot crossed with the emotional instability of Hulk and Jaws‘ taste for human flesh. There’s a poetic beauty in many of his sequences and his quest for friendship is pure-hearted even as he literally rips people in half. But Gunn identifies more with monsters than he does with heroes. Hell, even the extraterrestrial Starro is at once both destructive and sympathetic.

Given the effectiveness of Gunn’s darkly comic alacrity, it’s easier to mindwipe over The Suicide Squad‘s issues like one of Starro’s hive-mind facehuggers. The film is bogged down by one-too-many flashbacks that speedbump its progress, particularly in a somewhat aimless second act that disrupts the pacing. The antagonists are a revolving door of forgettable faces shuffled like a back alley deck for reasons I still don’t fully understand. The great Peter Capaldi is wasted in a thankless exposition-heavy villain role. And Gunn relies too heavily on superfluous flourishes in a busy story that still somehow mostly just takes place on a single small island. Perhaps most egregious, however, is that the film reduces Harley Quinn to a vehicle for the director’s persistent schlock with lines like “I love the rain, it’s like angels splooging all of us.” Cue snare-drum with a backstage eye roll. Yet his grasp for big band theatrics where every instrument gets a worthy solo drowns out the occasional flat note.

We’ve seen the superhero bubble begin to amalgamate other genres in order to stay top of mind. Captain America: The Winter Soldier is meant to evoke the political thrillers of the 1970s; Logan is a neo-Western; Deadpool is a raunchy R-rated action comedy; Joker is a psychological character study. But, for both better and worse, The Suicide Squad is proudly a superhero comic book movie through and through, albeit one that lets its freak flag fly nakedly while setting up and subverting expectations. Gunn doesn’t want to deconstruct the genre as much as remix it. Even as it succumbs to the most commercially corporate elements of artistic expression—a post credits scene tees up Gunn and Cena’s HBO Max spinoff Peacemaker with Amanda Waller’s subordinates recovering Peacemaker from a hospital to “save the fucking world” — it still manages to be its own isolated entry in the DCEU.

The Suicide Squad is strangely high-hoped with a sincerity and earnestness that would seem to fit with the gore and violence about as well as a Hummer in a packed supermarket parking lot. Yet it gels because the “horribly beautiful mind” of Gunn (as advertised in the movie’s trailers) understands two important things. Number one: ensemble movies only work if each character receives their just desserts. Number two: everything and nothing matters in superhero movies.

The Suicide Squad is now in theaters and on HBO Max. 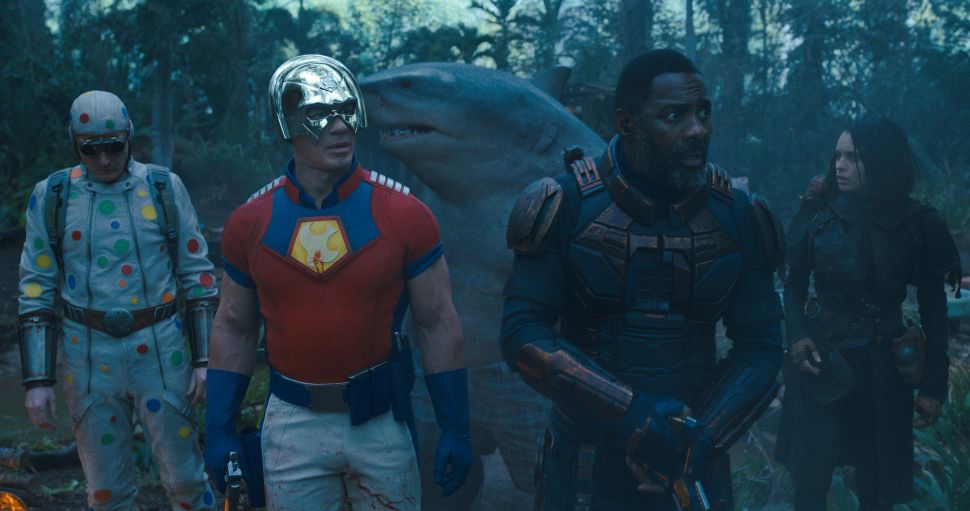