This post contains spoilers for the first season of The White Lotus.

“This is the spa!” Belinda (Natasha Rothwell), the spa manager of the White Lotus resort, says in a voice that conveys both “effortlessness” and a vascular maintenance of emotional presentation. At the very end of “spa,” you can catch a slight sigh. (In another life, I worked as a houseboy at a bed and breakfast in Provincetown, so I know the sound.) “Hey, it’s me,” the other voice says on the line. It cuts to Tanya (Jennifer Coolidge), an affluent goofy-cum-troubled guest at the hotel, stepping somewhat hesitantly onto the balcony of her room. She pauses and stumbles over some of her words, the way she has throughout the entirety of the show. “Uh, listen, um. Is it okay if we push our dinner off till tomorrow? I — I got asked out, believe it or not.”

Tanya, who is mourning her abusive mother and craves intimacy, goes on to describe the man as working with “a group from Black Lives Matter.” Belinda, who is Black and who has been promised by Tanya a possible business partnership, understands, agrees and supports Tanya’s endeavors, because, of course, she must. It may lead to heartbreak of a certain kind, but it must be done when you’re in the service industry, mustn’t it?

This exchange, and the relationship itself, from the fourth episode of The White Lotus — created, produced, written, and directed by Mike White — is microcosmically emblematic of the best and worst attributes of the show. It’s a setup for a later joke (Tanya’s date does not work with Black Lives Matter) where the punchline is dilated beyond broad comedy so that it flips back to drama again. It’s positioned as broadly prickly and satirical at first (this rich white woman and her mistake) before icily changing its focus back to ensemble study (the woman of color who still has the dangling carrot of independent success in view). And it codifies their relationship as explicitly within a matrix of sociopolitical lenses with regard to race, class and gender.

The show looks sheepishly at exploitation and imbalance, and then covers its face with a shit-eating grin, congratulating itself for glancing at everything in the first place.

In a way, their dynamic of a kooky, unhinged master and reasonable, hopeful submissive is the show’s most thoughtfully illustrated, often keyed into relational subtleties and the specific frustrations of what “emotional labor” actually entails for the service workers that must maintain their emotions for their work. One doesn’t exist without the other, and Coolidge’s at once amusing and horrifying performance wouldn’t work without Rothwell’s thoughtful, heartbreaking one.

But it’s basically a promise that’s seldom kept by the show. A kind of inverted Fawlty Towers, with Murray Bartlett as its relapsing addict version of Basil Fawlty, the put-upon hotel manager, The White Lotus feels unclear in its tone and intentions. Nominally imploding the lives of a flurry of people staying at the resort and the people who work there, the show gleefully enjoys whiplash between the sharply critical and generally melodramatic, the (supposedly) incisively satirical and aspirationally fleshed out interiority. For every piece of exaggeration intended to register as social critique and satire, there’s another that wants to take that same person’s life with a level of seriousness that is spoken in an altogether different contextual voice. Steve Zahn’s patriarch dodges cancer and goes over the top with a “life is so precious” spiel, but later has to process the news that his father died of AIDS complications and was queer. It’s too broad to be a good satire, too pointedly critical to be a straight tragedy, too invested in its melodrama to be a broad comedy, until it becomes ouroborosian in its indecision on tone and ethos. It’s not that these genres and tropes can’t coexist. It’s that here, they float adrift, devoid of alchemical balance.

The White Lotus asks us to look at their interior lives but then lets the characters engage in morally or ideologically dubious behavior and dares the audience to judge. Or frame or codify it in relation to a change in the sociopolitical sea. While Jake Lacy plays the ultimate unsatisfied guest, a nightmare of entitlement, Zahn and Connie Britton opine about the place of the straight white man in the modern world in front of a woman of color, on this island, in this social climate. Add to that mix a reactionary leftist podcast–ready Sydney Sweeney as their daughter, and Brittany O’Grady as her conflicted nonwhite friend, jousting with zingers poised to be posted with a chirp). It’s theory vs. application, the two never to meet harmoniously. This feels less like an accomplishment of thoughtful and rigorous characterization and rather an uncertainty of how these characters and ideological concepts want to orbit or obliterate one another.

This panoramic view, with various characters’ paths crossing but their trajectories kept pretty insular, never really crystallizes why we’re here in the first place. Relationships that are at first complementary remain confined, like Alexandra Daddario’s character trapped with her rich husband man-baby played by Lacy. And, sure, that’s part of the point, but, again, why are we here again? Because if power is a central question in everyone’s relationship (it is), a fixation for White to be sure, what exactly does he have to say about it? That it’s irascibly fickle in who it lets harness it and to whom it will never be stripped? Who will never acquire much of it in the first place? And what’s it got to say about whiteness — the way it shape-shifts, intrudes, haunts, pervades, invades — that isn’t easily tweetable?

The White Lotus hedges on those questions, too, centering whiteness without necessarily subverting or unsettling it. Despite a half-assed interest in Native Hawaiians, the score by Cristobal Tapia de Veer aided by music by the Rose Ensemble to give it a layer of proximity to quasi-Indigeneity, it is about politics but refuses relatively staunchly to be “about politics.” Its Native characters, like staffers Kai (Kekoa Scott Kekumano) and Lani (Jolene Purdy), are a blip, with White’s “interchangeable” intention never registering because it never gives them enough time for that thematic conceit to register. It splashes about these people’s lives, mired in the rhetoric of the extremely online trying to balance the ostensible realism of its characters emotional interiority, a didacticism spouted by those ideologically and hierarchically inert, and something about their locale being, effectively, a chess board laden with the ghosts of historical abuse and scarred by a history of colonial power.

For every piece of exaggeration intended to register as social critique and satire, there’s another that wants to take that same person’s life with a level of seriousness that is spoken in an altogether different contextual voice.

It’s a show about whiteness that frequently gestures towards prodding something deeper about the possibility of whiteness’s power being, if not toppled, then at least destabilized in some way. But these grand, and frankly romantic, signals are unsent like a mistaken Gmail before the time has run out. It feels, like some of its cinematography, muddled, both feeling an impulse to critique whiteness with brittle humor about money, autonomy and discourses du jour, but stops short of being actually satirical, sincerely destabilizing anyone’s sense of status safety. Rather than a laceration, it licks at what feels most like “boo boos,” while it’s unable to decide whether we’re watching humans or arch parodies of the affluent and unapologetic.

It’s this tacit embarrassment to go in on these concepts that frustrates me most, as someone who is very fond of White’s usually tender, deft hand at balancing tone, seeing both flaw and beauty, good intention and awful execution. I still believe Enlightened to be one of the best pieces of art in the 21st century. But, unfortunately at the White Lotus, power will not be displaced, status quo will not be disrupted, and critique will waver. It’s not really about the ones most at risk or made vulnerable by that power inequity. It’s mostly about those who are, if not at the center, then at least have some of the greatest proximity to it, which would be less bothersome if it had more precision in its aimed poisoned arrows. It’s not about history or politics, either, which would be fine if it didn’t constantly orient itself around the idea of being about history or politics.

The show looks sheepishly at exploitation and imbalance, and then covers its face with a shit-eating grin, congratulating itself for glancing at everything in the first place. The gorgeous title sequence by Plains of Yonder features beautiful, delicate wallpaper designs of sea creatures and presumably Native people canoeing, and as the sequence goes on, the ink on the paper begins to bloom and bleed. That’s what the show needed: to bloom and bleed. But it didn’t. The petals just wither and wilt.

The White Lotus is available to stream on HBO Max. 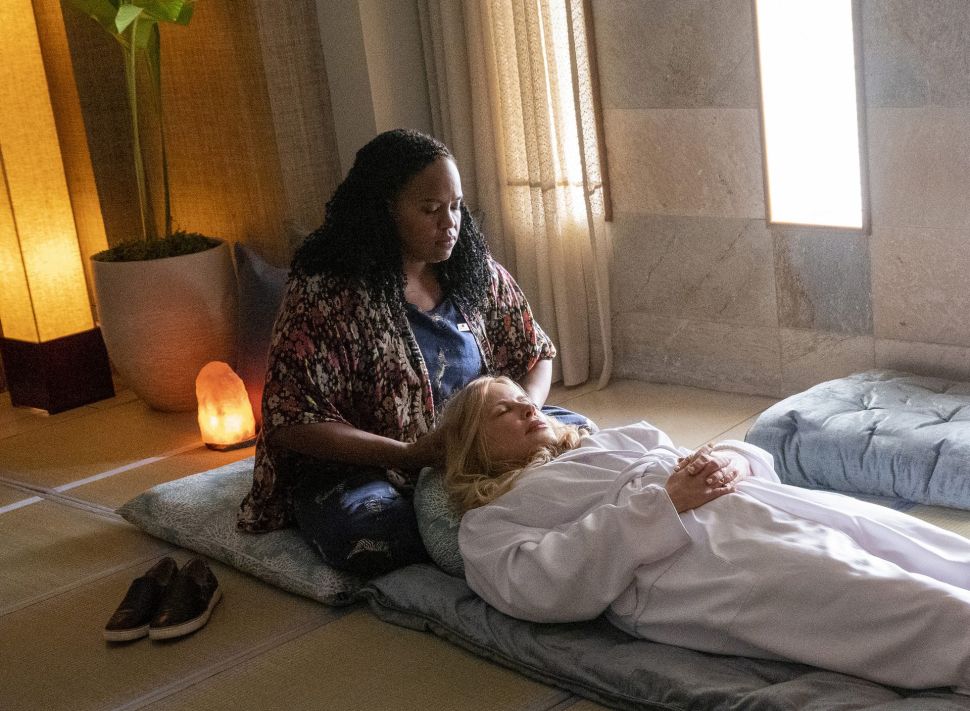