Three members of Pussy Riot, the punk feminist art collective that’s been the target of crackdowns from the Russian government since at least 2012, have left the country for a respite from “constant arrests,” the group announced in a tweet. In July, Masha Alekhina, Sasha Sofiev, Ann Kuzminikh, and Veronika Nikulshina of Pussy Riot were re-arrested on charges including petty hooliganism, swearing in public and arguing with a police officer. On Monday, a court in Moscow ruled that Pussy Riot member Rita Flores, who contracted COVID-19 while serving one of these recent jail sentences, will have to serve another five days and 21 hours in prison after being discharged from the hospital.

Alexander Sofeyev, Anna Kuzminykh and Veronika Nikulshina are the Pussy Riot members who’ve reportedly left Russia. Nikulshina drew the ire of the law when she ran onto the field during the 2018 World Cup final dressed in a police uniform; the final was attended by Vladimir Putin. Pussy Riot first drew Putin’s wrath in 2012, when members of the collective performed a song criticizing the President of Russia inside a Christian Orthodox church in Moscow.

After protesting on behalf of the imprisoned anti-corruption activist Aleksei Navalny in January, Pussy Riot members Masha Alekhina and Lucy Shteyn were accused of “violating sanitary-epidemiological norms.” Alekhina has been under house arrest since winter of 2020, and will remain so until January of 2022. Things in Russia have been particularly stringent recently due to the fact that Putin formally banned same-sex marriage in April, and Pussy Riot haven’t been the only outspoken figures to be persecuted by the extent of Russian law.

Yulia Tsvetkova, a Russian feminist artist who was put on trial after being accused of distributing pornography, recently went on a hunger strike to protest the charges against her. 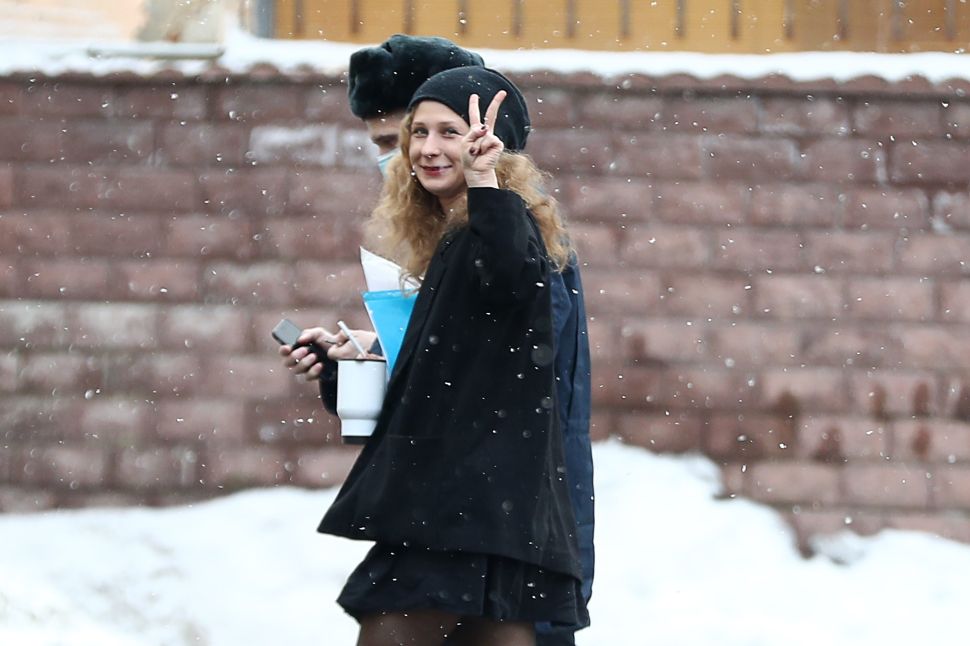