In what promises (threatens?) to be a plethora of movies about the COVID-19 pandemic, Together explores the toxic yet liberating effects of the virus on a British couple in suburban London during the 2020 lockdown in the UK. It covers one year, from March 24, 2020, the first day of the country-wide lockdown when only 422 people had died, to March 23, 2021, when 2,532,839 Brits had been vaccinated and 126,284 had been pronounced dead, per the film’s tallies. Working from a literate screenplay by Dennis Kelly, ace director Stephen Daldry, whose exhilarating projects on the screen include The Reader and The Hours in addition to the phenomenal, career-making Billy Elliott, tackles the daunting job of cramming a year of material into an hour and a half of cinematic fury in a film that is at once suspenseful,  provocative, funny and heartbreaking.

The two-hander, which some people will undoubtedly consider more suitable to an intimate off-Broadway stage, centers on an unmarried couple with a son who are referred to only as He (James McAvoy) and She (Sharon Hogan). When He loses his job as a digital-age marketing consultant and She is forced to vacate her London office as a charitable fundraiser for liberal causes, they move to a safer environment in the suburbs to wait out the ensuing panic.

At first, they react to Covid in much the same ways we do — voicing concerns about wearing masks, woefully underpaid medical professionals and overcrowded hospitals, and when vaccinations would come. But He and She are too busy fighting about their personal relationship to get too emotionally fearful.

But by May, 2020, when 32,065 people have been infected, she has a wrenching monologue upon returning from a visit with her mother in the ICU that brings them closer to reality. He, a stiff-upper-lip Scotsman with more of a sense of humor than She, takes it in stride, which only emphasizes their growing conflict. By December 2, with 59,699 deaths in the UK, England becomes the first country in Europe to approve the Pfizer vaccine. By then, He and She have learned to cope with the inevitable by reviving their abandoned sex life and tell the viewers about it while decorating their Christmas tree. In these episodes, they go through the same carefully calibrated emotional upheavals we all experience in a crisis — sympathy, pity, anger, denial and despair. Hope comes later.

On February 23, 2021, as the pandemic drags on and the UK tallies 669,105 vaccinations and 121,305 deaths, it is finally time to unleash the frustrations they’ve been hiding from each other about the unsatisfactory way the British government has handled the pandemic. She comes to the conclusion that her mother, whose hospital death she was forced to witness on a mobile phone, was killed — not by the virus but by government stupidity. When the film ends after 12 months of sacrifice and terror, He and She resolve to endure, reluctantly agreeing that the only way to survive a global disaster of this magnitude is…together.

Since all of the information is collated and the feelings  delivered by addressing the camera in a theatrical fashion, it’s not always an experience you can call cinematic, but the film has an emotional impact that is inescapable. The banter grows tedious (a lengthy scene in which She tries to explain the meaning of exponential growth is particularly jarring), but the writing is strong and the two actors have a surfeit of both chemistry and charisma.

Mr. McAvoy, in a huge change of pace from his many appearances in the  X-Men franchise, channels his excessive energy in a different direction that is exciting to watch. The son of a working-class family whose father was a Glasgow bus driver, he’s an eclectic performer whose career runs the gamut from London stage (Macbeth, Cyrano de Bergerac) to Hollywood thrillers. Despite a Scottish accent that is often difficult to understand, he plays the character known as He with a mesmerizing, committed and confident lightness of touch, while the brilliant Sharon Horgan is more aggressively passionate in her stormy reaction to a claustrophobic life in lockdown.

Exploring the suffocating complexities of domestic life in the social isolation of quarantine, this volatile couple explores the shifting values of their relationship, from sex to politics (including the possibility of — God forbid — marriage!), with an insight that is never less than a candid talisman to learn from and live by in troubled times. 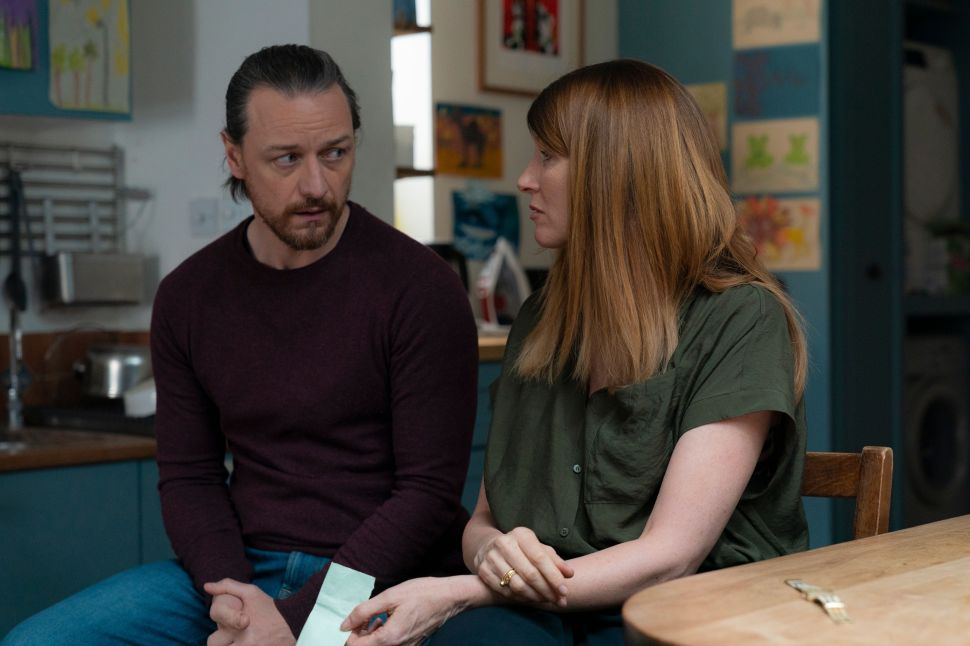