As the delta variant surges, companies ranging from Morgan Stanley to Microsoft have now called on their employees to get vaccinated if they want to return to the office. Restaurant owners like Danny Meyer of Union Square Hospitality Group require patrons to show proof of vaccination in order to even enter his establishments. Gyms like Equinox are doing the same.

Vaccine mandates are spreading quickly in a race to keep up with highly transmissible variants. New York City Mayor Bill De Blasio mandated that proof of vaccination would be required to enter restaurants, gyms and indoor entertainment venues in all five boroughs. In New York, the uphill battle is not as bad as it is in other states. In Louisiana, for instance, the vaccination rate is in the high thirties, while more than 70% of New Yorkers have received at least one shot.

To no surprise, backlash has followed. The unvaccinated have voiced a distrust of the science or argue that mandating vaccinations is some kind of violation of their civil rights. Those claims have prompted stark rebuke, like that of University of Toronto professor Richard Florida’s, who penned a recent op-ed in USA Today entitled “The unvaccinated don’t have the right to give us COVID. Crack down on them, not us.”

“Until now, the default has been to err on the side of liberty, allowing individuals a maximum of free choice and personal responsibility. But as the pandemic has evolved, this model is no longer viable.” Florida writes.

Health policy experts echo that point. “I think it [the Covid-19 vaccine] should be mandated,” Michael Abrams, Co-founder and Managing Partner of the healthcare consultancy Numerof & Associates tells Observer, adding that “individual choice is important but people should be accountable for the choices they make.”

With companies and government agencies moving forward with vaccine mandates—echoed by experts like Abrams—so does the misinformation about the history of mandatory vaccines.

One talking point that has floated around recently asserts this move is unprecedented. A recent op-ed in the Wall Street Journal slammed the idea of mandatory vaccinations. The authors claimed the COVID-19 vaccines are experimental. That claim is false, and has been rigorously fact checked on several different occasions.

Mandatory vaccinations are not new. “Throughout history there have been many examples of required vaccinations or mass vaccination campaigns aiming to get as much of the population as possible,” Dr Bruce Y. Lee, Professor of Health Policy and Management at the CUNY Graduate School of Public Health & Health Policy tells Observer.

Legal precedent for mandatory vaccinations was set as far back as 1905 in the wake of a smallpox epidemic across much of the northeast. The case, Jacobson v. Massachusetts, upheld the constitutionality of mandating the vaccine. It wasn’t until the mid 20th century that the World Health Organization embarked on its campaign to eradicate smallpox from the face of the earth.

For decades children have been required to receive vaccines in order to enroll in public schools. There are such laws in all 50 states. The required vaccinations generally follow the CDC’s recommended timelines.

Although many of these mandates have been in place for decades, some exemptions have appeared over the years for religious and philosophical reasons.

Needs also continue to evolve. In 1991, New York began requiring the HIB vaccine for toddlers which is used to prevent a specific type of influenza that often leads to bacterial meningitis.

HPV vaccination mandates have also been on the books for several years but are not as robust in numbers. As of April 2020, three states, as well as D.C. and Puerto Rico have mandates in place.

There is also a history of mandatory vaccinations in the military. The armed forces requires troops to receive 17 different vaccinations. Some healthcare workers have faced mandates in the past. In 2009, in the wake of the H1N1 outbreak, several hospitals across the country mandated vaccinations.

The anti-vax movement is actually a much more recent phenomenon within the history of mandated vaccinations in the U.S.

In 1998, then Dr. Andrew Wakefield published a report in The Lancet about a link between the MMR (measles, mumps and rubella) vaccine and autism which turned out to be a farce. His work was debunked and The Lancet retracted the study. He was discredited and he was stripped of his license to practice medicine. However, the damage was already done. The claims were perpetuated by celebrities like Jenny McCarthy for years.

“In many ways this anti-vax movement has clouded what history has actually been,” Dr. Lee says adding that “for years the measles vaccine wasn’t an issue, achieving over 95% coverage rates, but then suddenly it became an issue. Coverage rates dropped and then we had measles outbreaks.”

In the COVID-19 era, social media has only fueled the problem. Luckily, Facebook and Twitter are starting to crack down but amid the Delta variant surge it may be too little too late.

“The longer that this infection is allowed to persist, the more likely it seems to me that we will wind up with a version of this that manages to be more effective than the vaccines that we have out there,” Abrams adds.

There is hope though that the situation is changing. In the last week the Biden Administration hit its goal of 70% of American adults having received at least one shot. Several regions have also posted milestones including Mobile county Alabama, where vaccination rates skyrocketed in recent weeks. The number shot up 25% in the last week.

Experts like Abrams and Lee suggest mandatory vaccinations could help get us where we need to be, as historical precedent has shown. 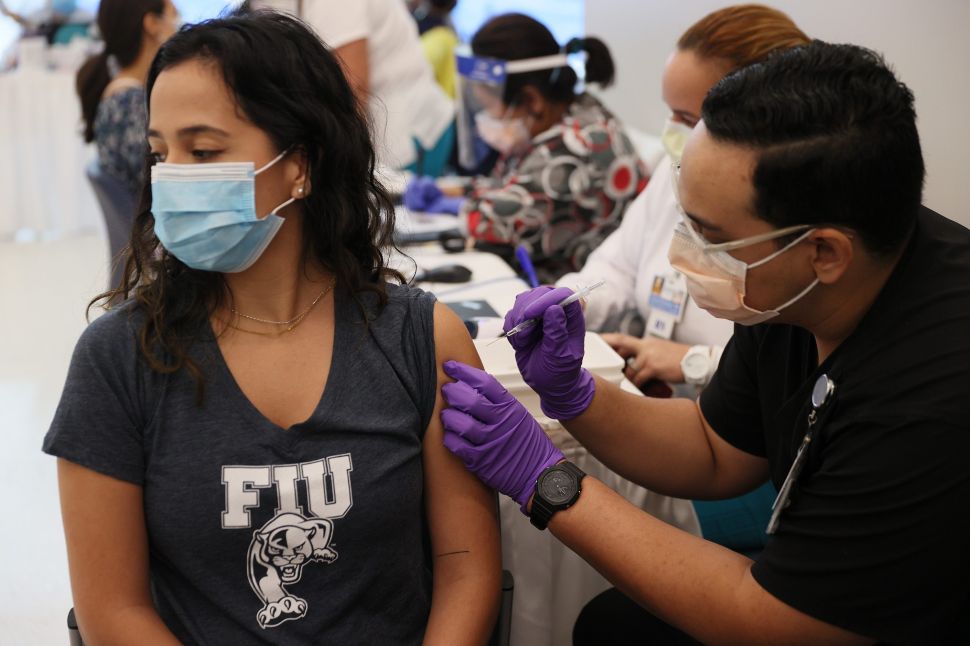