The movie Minari vaulted South Korean actress Youn Yuh-jung to international fame for her role as the foul-mouthed grandmother Joon-ha, who joins her daughter’s unraveling family in the American heartland. She won a string of awards, including an Oscar, a BAFTA, and a Critic’s Choice nomination, to name just a few.

But in South Korea, the veteran actress was already an icon. The 74-year-old actress is instantly recognizable by her trademark wire glasses, and beloved for her characteristic candor. Western audiences got a taste of her biting humor when she called the British people “snobbish” during her BAFTA acceptance speech.

That’s one thing Youn has in common with the grandmother she played in Minari: they both confound the stereotypes ascribed to women of a certain age.

In Minari, the grandmother’s arrival is anticipated for about a third of the movie, building up the expectation that she’ll be the family’s salvation: a kind, maybe stern, figure who sets things straight. Instead, she sort of blusters onto the scene: yelling at the TV, falling in love with Mountain Dew, bickering with her grandson.

In real life, Youn’s irreverence, a mix of grace and edge that she’s cultivated over decades on the screen, is what makes her so watchable.

In real life, Youn’s irreverence, a mix of grace and edge that she’s cultivated over decades on the screen, is what makes her so watchable. Youn has acted in a variety of movies and TV shows, as lead or bit characters, as a queen, an eccentric guesthouse owner, as the matriarch in many a family drama. She has also been in a number of reality shows, which go even further in showcasing her personality.

Just this year, Youn headlined a reality show called Youn’s Stay, a spinoff of a previous show called Youn’s Kitchen — in which a group of actors open Korean restaurants in tourist towns around the world — a concept absolutely deserving of every second of its 15-hour run time.

It’s wrong really to call Youn’s Kitchen a “reality show,” which in America at least, thrives on conflict and tension. It also can’t be characterized as the much more common variety-type shows popular in Korea, which often feature hijinks and slapstick humor. Instead, Youn’s Kitchen is a cross between a cooking show, a very loosely edited home video, and a chance to hang out with Youn as she makes endless batches of bibimbap — as addicting an alchemy as any.

In the second season, Youn travels with three other celebrities, including romantic comedy star Park Seo-joon and actress Jung Yu-mi (from Train to Busan), to a coastal Spanish town, Garachico, to open a restaurant for two weeks. And that’s literally it. For 90 minutes, you watch four amateurs — who are also famous celebrities — run a restaurant. You watch them prepping the astounding amount of vegetables needed for bibimbap, sweating over frying chicken in the tiny kitchen, setting up tables in the alley outside the shop, waiting anxiously for customers, and finally making each order as customers trickle in.

It turns out to be an absolutely amazing cooking show, since so much of it is just watching the four of them prep and cook traditional Korean dishes. The main ingredient is bibimbap, a classic Korean rice dish, as well as kimchijoen (kimchi pancake) and a sweet dessert called hottoek. Later they add japchae (glass noodle dish), and Korean fried chicken to the menu too.

As each customer comes in, Park and the last cast member, Lee Seo-jin, take the order, which Youn and Jung prepare over two burners, with some help from Park. Clearly, the tourists who are arriving know there’s a camera crew, though many of them seem to think Youn is a famous chef. They speak Spanish, Russian, English, German; often discussing in their language how handsome the two servers are. (Well yeah, that’s Park Seo-joon!)

Each time when the bibimbap arrives at the table, either Lee or Youn give a short introduction, explaining that “bibim” means mixed, and “bap” means rice, so the idea is to mix the rice with the vegetables, meat (if included), fried egg, and one of the two sauces provided. Youn often offers to mix the dish for them.

Over the course of the show, the only tension — and it’s not exactly thrilling — is whether customers will arrive, and how busy the staff will be. One Sunday, after the crew has done all the prep work, they’re waiting around for the lunch crowd. Park and Lee wander around the charming cobblestoned plaza nearby. It’s entirely empty since the entire village appears to be in church.

At the risk of falling for performed authenticity in a reality show, Youn’s Kitchen’s stakes are so low, and so undramatic, that it almost transcends the form altogether. Watching Youn grumble her way through yet another fried egg, or smile at yet another tourist who has just tasted japchae for the first time, is fun in itself. After a while, it becomes almost relaxing.

Which is maybe the point. In Youn’s Stay, which aired between January and April of this year, the same team returns with one additional cast member (Choi Woo-shik from Parasite) to run a traditional Korean guesthouse, which the show’s directors described as peaceful for “viewers and guests.”

Throughout the seasons, Youn is graceful, conscientious, and occasionally, irritable. After one long day in the kitchen, Youn is walking through the streets of Garachico with Jung. “Oh my god! You and I made 60 dishes today. Does that make sense?” she asks Jung. “Neither of us are cooks!”

But after a breath, she immediately follows that up with a non sequitur. “The cobblestone streets are so pretty, aren’t they?”

Youn’s Kitchen was produced by tvN. Season 2 is available to stream on Rakuten Viki. 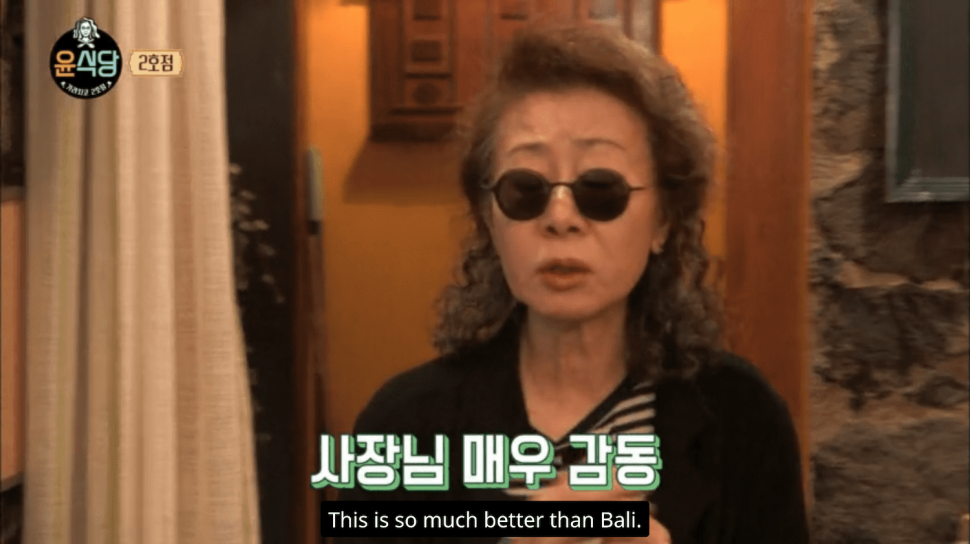