As a young man, Polish-Jewish human rights lawyer Raphael Lemkin set off on a mission to codify and persecute the crime of ethnic mass murder. Once the Nazis invaded Poland in 1939—and killed 49 of Lemkin’s family members—that mission became personal. Lemkin narrowly escaped, and by 1941 had settled in the United States, where he spoke out about the atrocities in Europe. To describe what was transpiring across the Atlantic—what Winston Churchill had called “a crime without a name”—Lemkin coined two new words. The first was genocide, a now widely-used term for the systematic killing of people from a certain nation or ethnic group. The second was a still lesser-known word: ethnocide—the systematic destruction of the culture of an ethnic group.

Lemkin’s concept of ethnocide is the tacit subject of the Jewish Museum’s new exhibition, “Afterlives: Recovering the Lost Stories of Looted Art,” which runs until January 9, 2022. In their campaign to “cleanse” Germany, the Nazis wanted to exterminate not only Jewish people but also Jewish culture, including artworks, books, and Judaica. This resulted in what curators Darsie Alexander and Sam Sackeroff call “one of the most dramatic stories of twentieth-century art.” “Afterlives” tells that story masterfully, and with the care and context it deserves.

Many of the exhibit’s works were pillaged on the basis of being “degenerate art,” meaning they were either modern or made by Jews. Other works were stolen because they belonged to Jewish collectors and gallerists. Most of the paintings on view in “Afterlives” were looted from Jewish collections by the Einsatzstab Reichsleiter Rosenberg, one of the largest Nazi art-looting task forces.

The fates of looted artworks varied. Many “degenerate” works were incinerated. Some, like Marc Chagall’s vivid and overtly Judaic Purim, were put up for sale on the international market to raise funds for the Nazi war effort. Others, like Gustave Courbet’s exquisite Nude Reclining by the Sea, were picked out by Nazi leaders for their personal collections. One of the exhibited paintings, Claude Lorrain’s Baroque landscape Battle on a Bridge, was earmarked for Hitler’s unrealized vanity museum, Fürermuseum.

The exhibit includes works by notable 20th-century artists such as Picasso and Cézanne; their respective paintings, Group of Characters and Bather and Rocks, were both rescued from a train bound for a Nazi storage facility when French soldiers intercepted its route. The most stunning works on display are Matisse’s Girl in Yellow and Blue with Guitar and Daisies, painted in 1939. Arguably two of Matisse’s least-appreciated masterpieces, the pairing has a gravitational pull all its own, inviting prolonged, sensual observation. (Apparently, Girl in Yellow’s allure is especially undeniable: While Matisse’s work was banned from German museums for being “degenerate,” one Nazi military leader still added the painting to his personal art collection.)

“Afterlives” also spotlights the work of displaced and persecuted Jewish artists who worked under extreme duress. In 1940, Paul Klee painted the muted Two Trees while in exile, having fled the Nazis; he died that same year. Otto Freundlich completed his energetic painting The Unity of Life and Death in 1938, just after an image of one of his sculptures covered the gallery guide for the Nazis’ “Degenerate Art” show in Munich, where the artworks on exhibition were derided and denigrated; five years later, Freundlich was murdered in a concentration camp. “Afterlives” is full of sobering moments like these. Wandering the gallery, I saw fellow visitors read a wall label, then solemnly nod their heads or let out somber sighs.

But the narrative that propels “Afterlives” is not just about tragedy of the Nazis’ ethnocidal plunder. It’s also about the many artworks and artifacts that survived thanks to the heroic efforts of individuals like renegade curator Rose Valland and restitution organizations like Jewish Cultural Reconstruction. “Afterlives” is the product of their legacy.

The Jewish Museum is uniquely positioned to tell this more hopeful chapter of the story, as the museum played a key role in the effort to recover countless plundered objects. After World War II, it served as a temporary storage depot for cultural property salvaged by Jewish Cultural Reconstruction, for which Hannah Arendt served as an emissary. Arendt’s correspondence also features prominently in the exhibit.

Fittingly, projected near her letters is footage from the historic tribunal which she so famously documented, the Nuremberg trials—specifically, a 1945 session on plundered art. I admit I knew trials only for their prosecution of the war criminals responsible for mass murders; I didn’t know the Nazis were tried for looting artwork as well. Watching the grainy footage, there was something moving about how seriously the tribunal took the theft, desecration, and destruction of art—a public testament to the profound, sacrosanct value of cultural objects.

One of the legal bases of the Nuremberg trials was the work of Raphael Lemkin. Still Lemkin critiqued the tribunal for prosecuting “a past Hitler” without being able to “envisage future Hitlers.” So how does one reckon with the past while envisioning the future? This is what the final stretch of “Afterlives” asks. The exhibit concludes with the work of contemporary artists commissioned by the Jewish Museum to interpret the “looting-and-recovery narrative.” Among the featured artists is Dor Guez, whose installation Belly of the Boat assembles objects he associates with his paternal grandparents, who escaped the concentration camps. In Belly of the Boat, the past and the present press against each other and the cultural and the personal collide to show how honoring one’s history can be an inventive, generative act.

I left “Afterlives” in somewhat of a daze, weighted by questions about the worth of art, the durability of culture, the responsibility I have to my ancestors who perished like Lemkin’s did. I thought about ethnocide, about the broader treatment of cultural objects. Which art is degraded, and which art is revered? Which art gets looted, and which art enjoys protection? And what can the journey of an art object reveal? I’d never before felt compelled to think about an artwork’s provenance—or, as Alexander and Sackeroff write in the exhibit’s introduction, its “biography”—but “Afterlives” reminds us that the story behind a canvas can be just as enlightening as the one that’s on it.

It’s easy and indeed sensible to doubt the value of art in the face of violence, oppression, and atrocity. A painted canvas can’t shorten the duration of a war or end the subjugation of a people.But, as evidenced by “Afterlives,” some painted canvases were imbued with enough meaning to warrant their confiscation by the Nazis; certain cultural objects were significant enough to necessitate destruction. “Art cannot change the world,” wrote German-Jewish theorist Herbert Marcus, “but it can contribute to changing the consciousness and drives of the men and women who could change the world.” 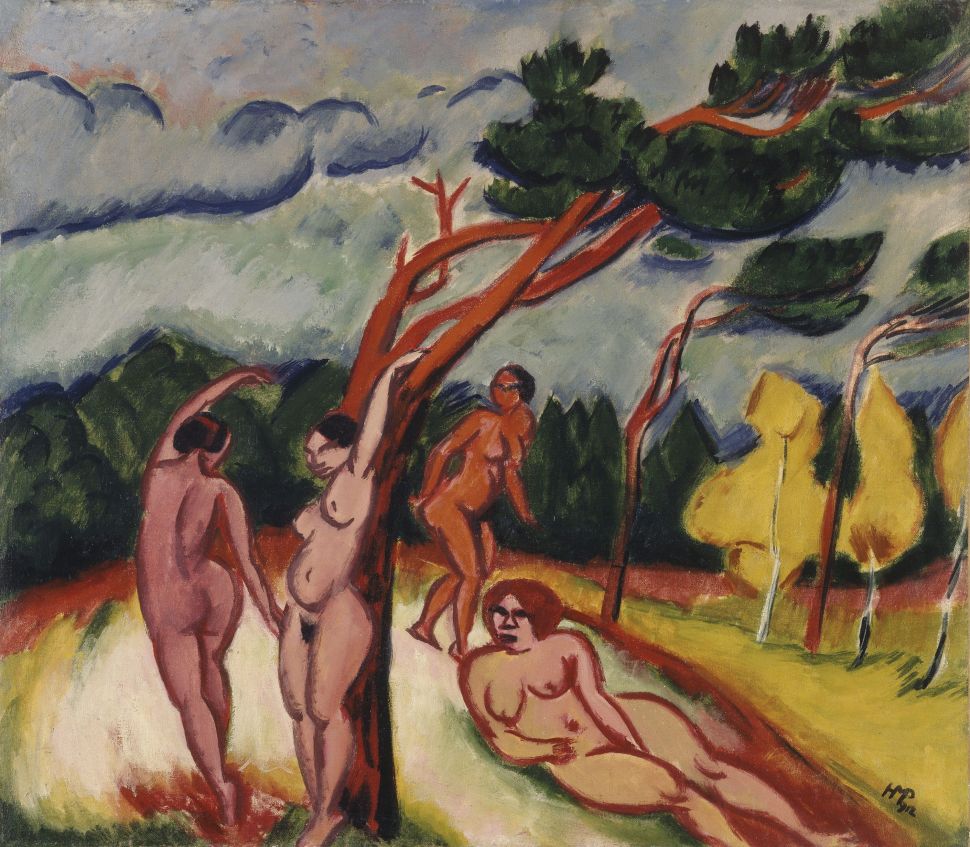