Mélanie Laurent, one of France’s most accomplished actresses-turned-filmmakers, is in the midst of another standout year in Hollywood. After starring in Alexandre Aja’s claustrophobic sci-fi thriller Oxygen and serving on Spike Lee’s jury at the Cannes Film Festival, Laurent — who rose to fame internationally in Quentin Tarantino’s 2009 war film Inglourious Basterds — has debuted her latest directorial effort on Prime Video, making it the streaming service’s first French original film.

Based on Victoria Mas’ best-selling novel of the same name, The Mad Women’s Ball (Le bal des folles in French) follows Eugénie Cléry (Lou de Laâge), an intelligent and passionate young woman who is at odds with her bourgeois milieu in the late 19th century. When Eugénie’s family learns that she can allegedly communicate with spirits, her father decides to commit her against her will to the neurological clinic at La Salpêtrière, where the women who are diagnosed as physically or mentally ill are subject to medical experiments without scruples.

There, Eugénie crosses paths with Geneviève (Laurent), a nurse in the neurological clinic who is tormented by the death of her sister. The meeting of these two women will change the trajectories of their lives forever as they prepare to attend the famous bal des folles, a ball at the clinic, organized every year by the eminent and enigmatic Professor Jean-Martin Charcot (Grégoire Bonnet). (In addition to serving as actor and director, Laurent also wrote the screenplay with Christophe Deslandes.)

In a recent Zoom interview, Laurent speaks with Observer about the challenges of wearing so many hats in one production, the pivotal scene between Eugénie and Geneviève on the night of the ball, and the inherent responsibility that comes with the rise in female filmmakers around the world.

Observer: It’s been almost two years since it was announced that you had been tapped to write and direct this film adaptation of Victoria Mas’ chilling book. How did you first get involved with this project, and what was it about the stories of these institutionalized women that really spoke to you?

Mélanie Laurent: I think that book was exactly everything that I was looking for, really. I felt extremely lucky when I finished the last page. I thought it was smart, brilliant, hard, beautiful about relationships. It talked about so many themes. It talked about feminism, spirituality, sorority, women altogether and taking care of themselves and surviving altogether. I had space in the mise en scène to make something extremely silent and weird at the beginning of the movie and be able to switch to something totally different. So, technically, I had so much space to have fun. The subject itself felt extremely modern and has so much resonance when I’m watching the world today, and so I felt lucky to have the rights to do that adaptation. And also, Victoria Mas let me do everything I wanted.

Was it always your intention to be the writer, director and actor, or was that something that came later in the casting process? How difficult was it for you to transition seamlessly from one job to the other?

I mean, I never want to be in my own movies, but there’s always the producers who force me to do it. (Laughs.) No, we wrote the script during the first wave [of the COVID-19 pandemic] and then we shot the movie during the second wave, and the second wave was really scary and also complicated for making a movie and organizing everything. So, at some point, we had that discussion of “is it gonna be easier if I’m doing one of the leads?” It would be less complicated to do both, and I’m never happy to do that [initially], and then I’m always happy that I’ve done it. So you’re more tired at the end of the day, but also, I found it extremely nice to be able, inside a scene, to direct your own actors and to lead them through the scene and to be with them. I found it kind of extraordinary. At the end of the day, I was like in the washing machine. I had so many things to deal with! (Laughs.) But when it’s a nice experience, it’s a nice tiredness.

How did you work with the rest of the crew to create this sophisticated style that reflects the aesthetic of the 19th century?

Well, we loved “The Poetry of Silence” by Vilhelm Hammershøi. That was one of our biggest references for the paintings and for the colors, and my set designer really worked hand-in-hand with my costume designer, so they really brought me this beautiful, historical research, to feel like we’re gonna dive into a period movie that makes sense. There’s no big mistakes, and we saw all those paintings about Charcot and [the ball] also — because we found some paintings and drawings of the bal — so all that helped us to feel like we were really doing something demanding, precise and stylish because I really wanted to make a very classic movie.

You wrote in your director’s statement that “this is a dance” between “two women against the world,” and there is a fascinating complexity to Eugénie and Geneviève’s dynamic, because both of them have something that the other person desperately wants. In your opinion, how does Geneviève reconcile her devotion to Professor Charcot and her science-loving father with this search for closure that Eugénie might be able to give her with these spirits?

Yeah, that’s why I loved her so much, and I felt like [Victoria Mas] was brilliant for that because the arcs of her characters were already in the book. Geneviève is probably the one who’s changed the most, and she’s so rigid and sure about everything. She’s sure that she’s respected in her job, she’s sure that she counts, she’s sure that she’s fine and happy and devoted to all the patients, and she is not anything close to those women… and everything flips and everything changes. And suddenly, she wants to believe so much of something else, and I thought that was really moving.

It also gives the audience so many layers of reading. If you’re really religious, I think you watch the movie very differently than if you’re not. And if you believe in ghosts and spirits, you’re definitely gonna have a different vision [than] if you don’t. In the book, the ghosts were everywhere, and you could visualize those ghosts. And the minute I took away those ghosts, I was literally making a movie about believers, and I thought that was very interesting, because it says a lot about many things and opens the whole subject to many perspectives.

What motivates Geneviève to ultimately sacrifice herself for the sake of Eugénie’s freedom at the end of the film?

Because I don’t think she sacrifices herself. I think she doesn’t know where to go. I think she’s done the minute she forgives herself. The minute she forgives herself, the minute she believes or not that her sister can hear her and she’s not mad at her, she’s free again. So she can stay there, and she’s meant to be there. And then, the only family she has is her father, who doesn’t want to see her anymore. She doesn’t have a love, she doesn’t have a child, and she’s meant to be with those other women. I think, for me, closing those gates is just a way to say, “Hey, you freed me. I’m gonna be free anywhere. You just go.”

While the corsets and morning coats might be a thing of the past, this film is still a searing indictment of the way that medical systems — and societies at large — have mistreated and misunderstood women, while also using them as a source of entertainment. What do you think this film has to say about the misogyny that has historically lied at the heart of behavioral sciences like psychology and continues to persist today?

The funny thing is I really wanted to make a movie about witches during [the] Middle Ages first, and then I read the book and I thought that was really interesting, and then I just realized, “Oh my God, wait. This is the same story.” It’s just another period of time. Those witches knew about the plans. They had the knowledge that the clergy didn’t allow them [to have], and I just feel like any century or period of time proves [to] us that every time a group of women or one single woman who just discovers something, it’s gonna shake a little bit that male society that’s patriarchal and very capitalist. She has to stop right away. She has to shut up.

And today, we have sort of a new revolution, but it’s a revolution inside our business industry. It changed a lot of things for women in our jobs. Female directors are finally a voice, but we forgot those Afghanistan women, those Indian women. We are forgetting those other women who are living the exact same story over and over and over, and there is no change for them. So, the only thing we can do as female directors who finally got a little bit of power is, obviously, to make movies about those other women.

The Mad Women’s Ball made its world premiere at the 2021 Toronto International Film Festival and is now streaming on Prime Video. 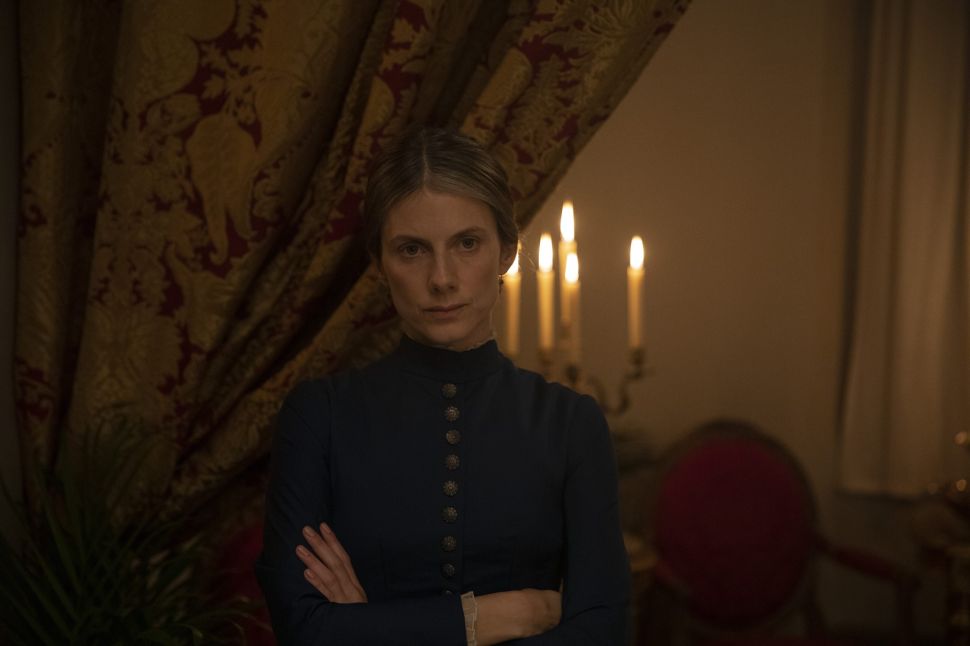