Nearly a decade after rewatching a documentary about Tammy Faye Messner (formerly Bakker) in her hotel room during the press tour for Zero Dark Thirty, Jessica Chastain has transformed into the late televangelist, who was known for her indelible eyelashes and willingness to embrace people from all walks of life, in a compelling and humanizing new biopic.

Directed by Michael Showalter (The Big Sick) and written by Abe Sylvia (Dead to Me), The Eyes of Tammy Faye — which arrives in theaters Friday — chronicles the extraordinary rise, fall and redemption of the idiosyncratic televangelist who was the subject of tabloid fodder in the late 20th century. In the 1970s and 80s, Tammy Faye and her husband, Jim Bakker (Andrew Garfield), rose to fame as the creators of the world’s largest religious broadcast network and theme park. But it wasn’t long before financial improprieties, relentless rivals and shocking scandals toppled their carefully constructed empire, leading to Jim’s indictment for fraud and conspiracy in the late 80s.

In a recent Zoom interview from Calgary (where he has been self-isolating after a few breakthrough cases of COVID-19 halted production on his new FX on Hulu miniseries Under the Banner of Heaven), Garfield speaks with Observer about his approach to playing the disgraced televangelist, the resonance of Tammy Faye in today’s materialistic society, his upcoming collaboration with Lin-Manuel Miranda on the film adaptation of Jonathan Larson’s Tick, Tick… Boom!, and his thoughts on Tom Holland’s latest iteration of Spider-Man.

Observer: Apart from visiting a local church in North Carolina every Sunday with Jessica Chastain, how did you prepare to embody a man who has been satirized and scrutinized in the media?

Andrew Garfield: Luckily, I came to it kind of fresh and clear-eyed, and I didn’t have much prior knowledge of Jim or Tammy. So I was able to just come in without judgement and kind of get underneath all of the general stuff that has been written or spoken about them, so that was a big bonus. And there’s just a feast of material about Jim — books and autobiographies and biographies and exposés and reportage — and there’s video footage of every dang show he ever did, and there’s articles upon articles. And then, there’s people that were willing to talk to me about Jim, who knew Jim, and there was my own imagination. So you have so many resources at hand, and the idea is, for me, I just take what feeds me and what feels like is gonna be of service to the character, and then kind of go from there.

Jessica was in close contact with both of Tammy Faye and Jim’s children before and during production, so did you ever get a chance to speak with them about their own experiences? Have you ever spoken with the real Jim Bakker?

I was in touch with the kids as well. I never got to speak to Jim — I tried, and I was never met there by him, but that’s okay. His kids are wonderful and other people that we managed to track down were incredible.

Jessica has really seen this project through from start to finish. What does she bring to the table as an actress and a producer that sets her apart from all of the people that you’ve worked with in the past?

She’s really cared about this story for a long, long time. Obviously, the characters are really close to her heart, and I really admire that and the kind of passion that pushes something like that through. And her devotion to the work is really second-to-none. She really shows up fully for the character she’s playing and is an advocate for the character she’s playing. In this case, it’s beautiful, because Tammy is a very warm, loving, beautiful person. She always was, so it was wonderful to help support that.

Jessica has spoken about how difficult it was to act under all of her make-up and prosthetics, because it just got heavier and heavier as Tammy Faye got older. Can you talk a little bit about your own physical transformation into Jim?

It was definitely another element that was useful but also challenging. For me, I was a bit resistant to the prosthetics, because I didn’t want to have to act through silicone. I wanted to be free, but ultimately, I found a good version of that for myself where I felt like I was in line with Jim and in line with Jessica, and also felt free enough to be able to still do my work. It was definitely an interesting part of the process that I’d never done before. And thankfully, the two brilliant make-up artists that were working on me were just incredibly good guys, and I’m still friendly with [them] and grateful that we got along, because it was a lot of time in the chair, just hanging out.

In the film, Jim’s issues of self-worth and belief in his own interpretations of scriptures led him to equate God’s love with insatiable material wealth. Why do you think that messaging is particularly resonant in today’s society?

I think that’s exactly right, and I’m glad that you feel that way, because that’s exactly how I feel about it… because I do feel like this is where we are. He’s another victim of this cultural moment we’re in where we’re told that we’re only as valuable as how much money we make year-in, year-out, and that’s why things like socialized health care in this country can’t ever take off, whereas in the U.K. or in Canada, it’s a human right. But it’s this way of thinking, and it’s why immigration policy is so problematic — how we value human life, how we value ourselves, how we value the time we spend here is just so wrong-headed. I think, hopefully, a part of what this story can reflect is that mass-minded wrong-headedness that we’re all involved in and that is kind of bringing us to the brink of destruction, ecological or otherwise. It literally is this money obsession — this money worship is maybe the main issue.

Is the online consumerist frenzy one of the reasons that you’re not on social media right now?

(Smiles.) Maybe, I think so. I think I have a healthy fear of how I spend my time, and I don’t want to give it to something that isn’t gonna ultimately nourish me. But that being said, it’s probably a healthy fear of a bombardment of opinion and information, and I try to temper it and mitigate my time with these devices, even though I fail at it most of the time because I’m addicted like anybody else. So, yeah, I definitely do my best to stay in line with the things that I actually value, and I fail at it constantly, because I’m a person just like Jim.

You’ve been bombarded with questions about Spider-Man recently, and you know that, regardless of what you say, people still think that you will appear in Spider-Man: No Way Home. But as you look back on your own experience all these years later, how did the process of becoming Spider-Man ultimately change you as a person, and if you were ever to return, how would you like to see that character evolve from the first two movies?

(Smiles, rolls his head back.) You know, I’m so grateful for the experience of playing the character. It taught me so much about myself, about storytelling, about mythology, about the meaning of what we are doing as filmmakers and storytellers and how important it is, especially for young people, to get a sense of a value system and a cosmology. There’s just a hunger for stories — a hunger for a framework of how to make sense of what it is to be alive. And I think, at best, what those films can do is provide a soulful way of proceeding, so I really feel grateful for multiple reasons that I got to play that character and make those films.

And it’s impossible for me to answer the next question, because it’s purely hypothetical. I’m just very, very happy to watch Tom Holland. I really love now being a fan of the character and being able to sit back and watch someone else deal with the pressure of being Peter Parker and Spider-Man. And I’m so grateful for my tenure and I’m now really grateful that we have such a great actor playing the character now.

You also have Tick, Tick… Boom! coming up later this year. What can you tell me about the experience of working with the prolific Lin-Manuel Miranda on that musical project?

Yeah, it was a dream come true, to be honest. I’ve been a fan of Lin ever since In the Heights and Hamilton and Freestyle Love Supreme. I just think he’s obviously this brilliantly prolific writer and artist, and I was fascinated to see how he would be as a director. It was a very easy no-brainer to jump on the train. He has this amazing, infectious point of view on everything, of pure imagination and everything being possible. “If you can dream it, you can do it.” And it’s incredibly optimistic, it’s incredibly joyful, and I think it’s the most joyful film I’ve ever been on.

And in terms of Jonathan Larson and that character, I want to go into more detail about it at some point, because it was a life-changing story to participate in and a character to dive into and to explore for so many reasons. He was just this magical creature on this earth for a very brief period of time that was in tune with himself in a way that was overwhelming for a lot of the people around him. But to get to inhabit him and to get to attempt to honor this amazing, short life that he lived, and all of the beauty and the art that he left behind, and all of the connection and the meaning and profundity that he left behind, was only a privilege, in service to him and his family. His life was a service to art itself, creativity, our dreams, and a collective consciousness of taking care of your fellow neighbor and person, and treating everyone as an equal — a real meritocracy. He was a radical in the midst of a time where Ronald Reagan wasn’t talking about the A.I.D.S. epidemic. He was fighting for the soul of his country through his art, and he was in his little Lower East Side apartment with not many people listening to his art until, of course, he fatefully passes away and leaves us with Rent, which changes everything. It changes people’s hearts and minds, and it’s a profound piece.

The Eyes of Tammy Faye made its world premiere at the Toronto International Film Festival this past Sunday and will be released in theaters this Friday. 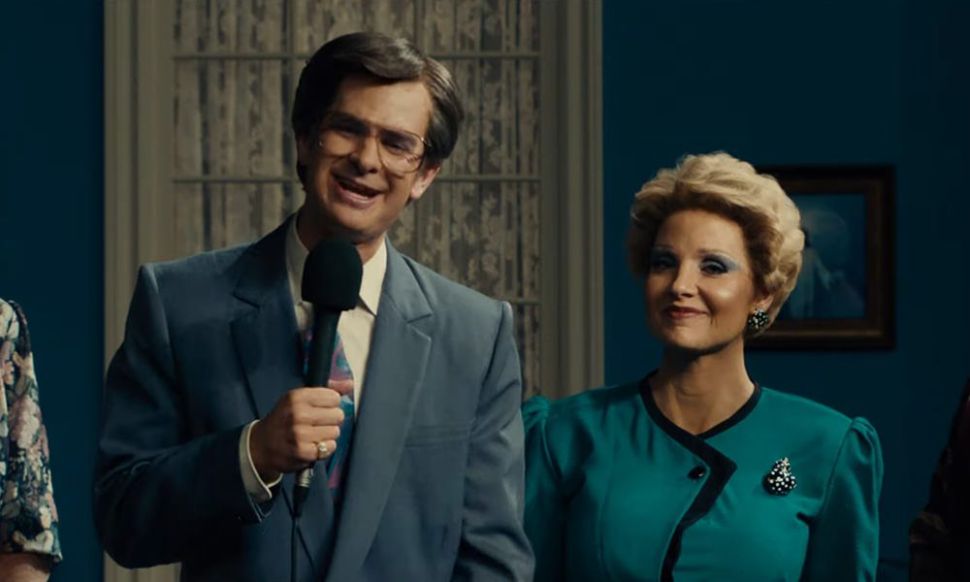