“It takes more power to build than burn,” one character intones in the premiere episode of Apple’s new expensive-looking science-fiction series, Foundation, based on Isaac Asimov’s novel series of the same name. If true, than Foundation, created by David S. Goyer (Terminator: Dark Fate, The Dark Knight) and Josh Friedman (TNT’s Snowpiercer), is only running at half power.

The big budget series is a complex saga of humanity scattered across the galaxy living under the rule of the Galactic Empire, headed by a succession of three identical clones at different stages of their life: childhood, adulthood (played by Lee Pace), and old age. In the waning generations of this futuristic feudal state, mathematician Harry Seldon (Jared Harris) develops his theory of psychohistory, a mathematical sociology that uses statistical laws of mass action to predict the future of large populations. His data foresees the collapse of the Empire and a Dark Age lasting 30,000 years. His loyal followers attempt to preserve their culture as the Galactic Empire clings desperately to power and control. What ensues is “a 1,000-year chess game between Hari Seldon and the Empire, and all the characters in between are the pawns, but some of the pawns over the course of this saga end up becoming kings and queens,” according to Goyer.

Conceptually, this is exactly the sort of high-minded blockbuster genre proselytization that Apple should be aiming for. Each major streaming service is anchored by a similar broad appeal tentpole hit rooted in sci-fi (Netflix’s Stranger Things, Disney+’s The Mandalorian, Amazon’s The Boys, etc.). But Foundation forces the viewer to endure an elongated build up to finally arrive at its central conceit: saving the galaxy. At that point, you may begin to wonder if this galaxy is worth the trouble.

The show doesn’t immediately drown you in world building as it launches into its prime directive preamble (the sea of sci-fi lingo and canonical mumbo jumbo comes later). Yet the premiere, “The Emperor’s Peace,” is downloading a lot of information to the viewer in a bloated 68-minute debut. Over the eight episodes provided to critics it unfurls a millennia worth of story. But unfortunately, that story is dropped on us like an overstuffed trash bag down a garbage chute.

Foundation, with its galactic empire, fantastical worlds, and lightyear-spanning politics, is meant to be thought-provoking, awe-inspiring, and inspirational. A divide in class, generation, and distance at a scale heretofore unknown; a revolution against inter-planetary tyranny. Various cultures and societies clashing, collaborating, and continuing cyclical patterns for eons. Yet the show’s starry-eyed ambitions are dulled by its execution. Its scattered focus stalls momentum by introducing and discarding characters like a wad of receipts found in your back pocket after a night on the town.

Multiple time jumps rip us from the characters and situations we begin to invest in early on only to reassert us in unfamiliar and far less engaging new time periods. One such shift would be jarring enough as viewers attempt to track such an expansive ensemble narrative. But Foundation barrels forward with flash backs and flash forwards to the point where you feel just as marooned among the stars as some of its interstellar refugees.

The goal of such tactics is to provide key context, but it succeeds only in muddling an already overwhelming puzzle. It leaves the audience without an emotional anchor in what can already be a coldly detached series. There’s value in simply starting a story where it begins, and doing away with these temporally jumbled shenanigans that divide our affection and allegiance and overcomplicate an already dense narrative. It didn’t work for The Witcher and it doesn’t work for Foundation.

Foundation is so in love with its own expansive scope that it forgets about individuality. Leah Harvey’s Salvor Hardin, a non-believer leader of Seldon’s exiled followers, and Laura Birn’s Demerzel, the enigmatic aide to the Emperor of the Galaxy, manage to shine through as intriguing characters and not just world-building fodder. But they are exceptions. We’re meant to believe Harry Seldon’s followers and his theory of psychohistory represent the moral redemption of the universe, but why? Because Harris’ character took the time to shake a worker’s hand and make a rousing speech? The show simply positions him as the only counterpoint to the evil Empire while painting a questionable portrait of a man who steadfastly believes the ends justify the means. Those who sacrificed along the way may not agree. Seldon’s predictive psychohistory raises the question of fate versus free will, yet it’s a topic handled more elegantly in FX on Hulu’s Devs.

Foundation revels in its grandeur and grand it its—production designer Rory Cheyne deserves credit for such visual splendor. But we forget that the beauty of a prism is still transparent. And that’s a shame because there are isolated moments of grace and curiosity yearning to break free of the story’s confusing gimmickry.

As mentioned, the Galactic Empire is spearheaded by three perfect genetic clones of the Empire’s first ruler, known as Cleon The First. In-world detractors accuse them of lacking souls and their very existence raises questions of individuated sentience. Can one maneuver themselves to a different path when they are genetically engineered for a single purpose and indoctrinated into that effort from birth? If so, what form does that take? And does a divergence from conformity truly equate to individuality? Where does a sense of self belong in a galactic coalition of trillions? One might even argue that a sense of self is counterproductive when so much chaos must be regulated in some way to avoid cataclysms on a scale unfathomable to our solitary planetary existence.

Foundation is at its best when it orbits these thematic gravitational centers. It is then that we find our characters hopelessly lost in loops, much like the heroes and villains of HBO’s Westworld. The question then becomes whether or not those trapped within a loop will break free and, if so, what will that require of them? Sadly, the potential from these narratives are overshadowed by the tangentially related false-start world-hopping that attempts to form a cohesive through line.

“Are my choices my own, or is my destiny governed by an unseen hand?,” it’s asked in Episode 4, “Barbarians at the Gate.” Foundation wants to grapple with legacy, splitting the difference between heritage and birthright. But by committing to its own version of structured narrative chaos, it’s unwittingly locked itself into its own loop in which each of the story’s new iterations washes away the foundation of its predecessor, leaving little to build upon and less to endure.

Foundation is indeed a grand and sweeping epic, but so too is a tidal wave that leaves nothing but incomprehension in its wake. 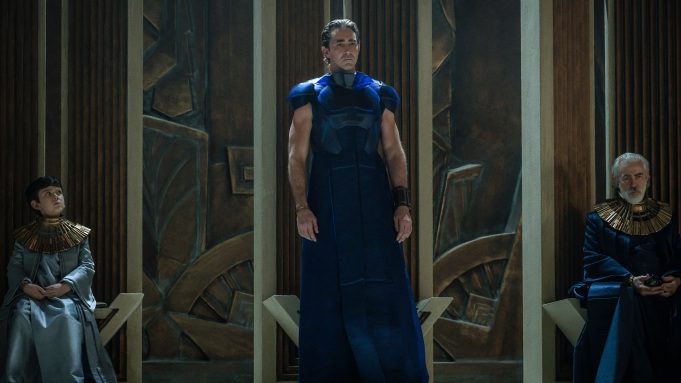