In the early months of the COVID-19 pandemic, Dan Stevens received a script out of the blue from his reps with a unique note that essentially said: “We don’t know what this is, but you read German. Take a look and see what you think.”

Stevens, who studied German in school and practiced the language on several personal trips to Germany, was immediately intrigued. So he took out his German dictionary and spent a day translating and poring over a fascinating screenplay about a woman who must navigate her rocky relationship with the robot designed to be her ideal life partner.

Directed by Maria Schrader from a screenplay that she had written with her partner, Jan Schomberg, I’m Your Man centers on Alma (played by Maren Eggert), an accomplished researcher of ancient cuneiform writing at the famous Pergamon Museum in Berlin, who grudgingly agrees to participate in an extraordinary experiment in order to obtain research funds for her work. For three weeks, she must live with Tom (Stevens), a humanoid robot that is tailored to her character and needs. While Tom’s initial attempts at forming a connection are awkward and outlandish, his perpetual analysis of Alma allows him to penetrate deeper and deeper into her real longings.

“It spoke to me on an actorly level that I could see the physical, comedic potential of this role and what a challenge that would be, but also, the themes that came out of it, and the humor and the wit that it dealt with those big, philosophical questions,” Stevens tells Observer. “I was really excited by that, because I think a film with this kind of tone can really tap into things in a way that people don’t expect. It leaves you with some pretty wonderful questions afterwards, and I think there’s going to be some great after-movie conversations coming out of a film like this. Those are some of my favourite films, really — the films that leave you with that kind of sense.”

In a recent Zoom interview, Stevens (Downton Abbey, Beauty and the Beast, Eurovision Song Contest: The Story of Fire Saga) speaks with Observer about the unique creative challenges of shooting his second feature film in German, the process of working with Schrader and Eggert to bring this “satirical” take on the traditional romantic comedy to life, and the evolution of Alma and Tom’s unique — and surprisingly human — relationship.

[Note: This interview contains spoilers for I’m Your Man.]

Observer: The beautiful thing about independent films is that you usually have a pretty strong relationship with the writer-director, and Maria said that you ticked all the right boxes for her when she was looking to cast Tom. How did you really work with her to not only build Tom’s mannerisms, but also to ensure that you kept that same light and comedic tone that was in the script?

Dan Stevens: She wrote the screenplay with her partner, Jan, and when you meet the two of them, they’re both fiercely intelligent and witty and fun people. I met them, and immediately I got to Berlin, and I sort of downloaded everything that I had gotten from their screenplay in translation, and they were able to kind of feedback their thoughts. And we took it from there, really, and I think we both found the premise very funny, and the idea of deconstructing and satirizing a romantic comedy and exactly what that is. It really doesn’t lean that heavily on the tech; it doesn’t really care about the wiring and the firmware or software he has. (Laughs.) It’s just about this concept, and it, therefore, kind of reflects as much back on humanity and how weird humanity is, and gives us an opportunity to look at the imperfections of humanity. So watching Tom mirror some of those [things] and watching Tom get it wrong, and the naivety with which he treads into our world, is just such a fun premise, such a delight. The comedy and the likeness — it just gave us so much room to explore.

I began learning German last year, so I know that it is an incredibly precise language to learn. But I would imagine that you were able to really immerse yourself in the German language and culture during the process of shooting this film. Is it true that you only wanted cast and crew members to speak with you in German during production, and how would you say having that continuous feedback loop in real life paralleled your portrayal of Tom?

Well, first of all, congratulations on learning German, because it’s not easy! And I hope you keep it up. I think it’s a rewarding experience learning any new language, frankly. I found, keeping everyone talking to me in German, it just kept my ear firing in a way that was great for me, great for the role. Tom is a character who is listening very precisely and trying to learn and improve all the time. I, as a human being, was literally listening and learning and trying to improve the whole way through. My German, by the end of the summer, was a lot better than it was at the beginning.

But just getting my head around some of the language that Tom has to deliver, particularly in the beginning, he deploys unnecessarily complex and heightened German that is totally wrong and inappropriate for Alma or that situation. But it’s part of the fun and there’s a linguistic play going on as well as the physical stuff, so just sticking in the language really helped. I would recommend to anybody who wants to improve their language skills [to] throw yourself into that country when it’s safe to do so and to have at it, because that is literally the best way to learn.

What do you think it is about the way that Germans seem to tackle such broad and philosophical questions that seems to transcend language barriers and, ultimately, make for such a universal film about humanity?

Yeah, a lot of the great philosophers throughout history have come out of that country, so we know that they’re a very deep-thinking people. But I think it’s the wit, it’s the humor and the lightness of touch. It’s the only country in the world where I’ve been in a nightclub and went over to the side of the room and, at about 2 in the morning, a group of four Germans are discussing [the philosopher Martin] Heidegger. (Laughs.) Like, honestly, and I was just so blown away by this. I don’t know anywhere else in the world where this would happen! (Laughs.)

Well, let me ask you the most obvious question: Do you think you could ever fall in love with a humanoid android that is tailored to all of your needs and desires?

I don’t know. Maybe if they were as lovely as Tom. (Laughs.)

But that would be weird, because then it would look a bit like me, and it would be very odd. (Laughs.) So I would say no to that one. But I don’t know… I don’t know. I think that’s just one of the many questions that the film throws up.

Alma’s monologue at the end of the film is extremely poignant, because while she might have all of these reasons for thinking that having a humanoid partner will do more harm than good, she can’t deny the indelible impact that Tom has had on her life. What do you make of Alma’s evolution, especially in that final scene of the film?

Yeah, it’s a wonderful thing. Having satirized and played with the conventions of a romantic comedy, it sort of brings us neatly round to this idea of “head over heart,” or rather, “heart over head.” For so long, her intellect is sort of resisting whatever this is, and yet, as you say, there’s something indelibly real about what she, perhaps, needs and wants and what Tom can provide. I think it’s odd, and it’s certainly not usual, and I think it’s amazing to be able to lead audiences to that point where you’re like, “Oh, wow. Actually, for this person, maybe this is a great thing, despite all of her cynicism and thinking otherwise. Perhaps, this is a thing for good.” And it’s quite rare that we see that in a sci-fi — the android is a benevolent force and isn’t gonna suddenly turn around and murder us all. (Laughs.)

How did you work with Maren to really bring out the complementary qualities in Alma and Tom? What was it like working with her?

She gives such a beautiful, real and naturalistic performance. It was a real privilege to watch and also kind of frustrating not to be able to fully engage in the way I might normally, and that was one of our challenges. I think, also, on Maria’s part, she deliberately was looking for a foreign actor who could speak German to give a sense of otherness, but also, she very deliberately cast every other role and particularly Alma with a very, very naturalistic and human performer. And if you watch Maren’s other movies, she’s acted, actually, in French quite a lot, so we had that in common, that we sort of worked in our second language a bit. English is very much her third language, I think. Watching those performances [that are] so naturalistic, very European art house kind of style stuff [and] having that kind of jarring against Tom’s style was part of the fun of this film, really. Watching an actress with those skills kind of throw the ball and have it hit the ground rather than have it be a back-and-forth sort of situation. (Laughs.)

It was quite frustrating, I think, to begin with, and I’m sure I caused her many headaches by not giving that usual response. But I think, ultimately, we found our groove, and she appreciated in the end what was happening. I was very, very lucky to have a partner like Maren, for sure.

I’m Your Man is now playing in theaters. 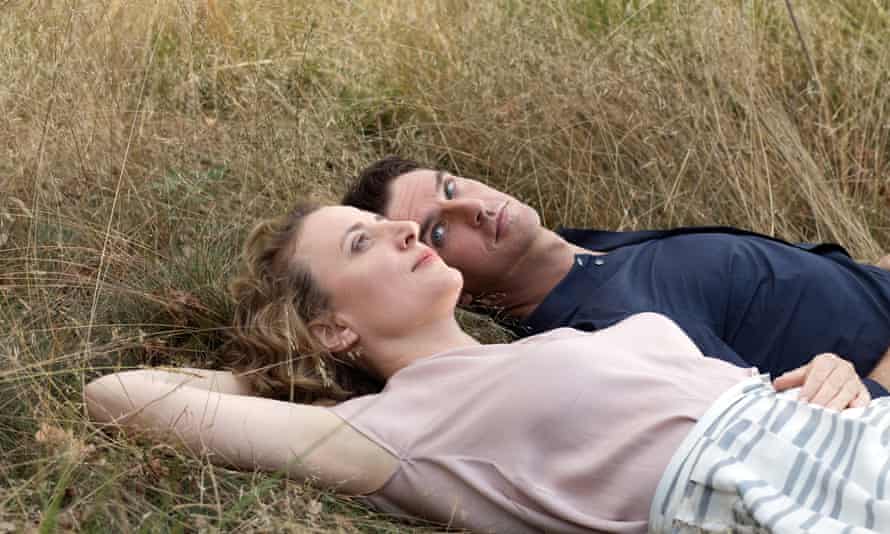