As in-person theater stages a careful but eager re-entrance following eighteen months of lockdown, the season seems pretty diverse. There are buzzy imports from London (The Lehmann Trilogy, Six); a gender-flipped revival of a Broadway classic (Company); and a splashy new musical about a global icon (Diana). But what about real diversity? Black-authored shows about Black subjects that could bring in new audiences? This season delivers. We’re highlighting a few works opening on Broadway and Off this fall — all different — but each exploring inequity and structural racism in American society and theater. (It’s not even a complete list for this fall; there’s the already opened Pass Over, as well as Chicken and Biscuits and Clyde’s.) The shows are listed in order of the year the story is set. As a movement Black Lives Matter may have arisen in recent years, but the theatrical conversation around systemic racism has been going on much longer.

Originally performed Off Broadway in 1955, actor and playwright Alice Childress’ exposé of racism in theater finally arrives on Broadway. Set in the mid-’50s, this backstage drama centers on a group of actors rehearsing a new play by a white writer about sharecroppers in the South. Veteran performer Wiletta Mayer (the incandescent LaChanze) is excited to finally make her Broadway debut, but how much dignity will she surrender to an overbearing white director and the acting conventions of the stage? Produced by the Roundabout Theatre Company and directed by Charles Randolph-Wright, the play was way ahead of its times in charting micro-aggressions in the theater world, and the hypocrisies of white liberals.

While the creative team behind this 2003 musical — book writer Tony Kushner and composer Jeanine Tesori — are white, this groundbreaking work deserves a place on this list. Set in 1963 right around the time of JFK’s assassination, the story follows a Black maid in Louisiana who works for a Jewish family that has relocated from the north. Caroline (the acclaimed Sharon D. Clarke in this revival) develops a wry, maternal-like bond with Noah, the Gellmans’ eight-year-old son, until money found in dirty clothes bound for washing — the “change” of the title — tears them apart. A sung-through work of intense beauty and complexity, the piece shows a strong Black woman who is not a cardboard saint or avenging angel; she’s angry and tired but won’t let the world’s injustice warp her soul. Tesori embraces blues, R&B, and art song — it’s one of the best scores of the past 20 years. Set at the height of the Civil Rights Era (a vandalized Confederate statue figures in), Caroline is heartbreaking and a call to allyship.

The title alone may give you a clue as to the subject: the L.A. riots that followed the not guilty verdict in the trial of cops who savagely beat Rodney King. To create this fast-moving panorama of the five days of looting, burning, shooting, and its aftermath, Smith spoke to 350 residents of the Los Angeles area. She impersonated about four dozen of them — with astonishing precision and accuracy — in her solo docudrama, which premiered in 1994 at the Public Theater. Now Smith remounts her iconic exploration with director Taibi Magar for an ensemble cast of five actors: Elena Hurst, Wesley T. Jones, Francis Jue, Karl Kenzler, and Tiffany Rachelle Stewart. If you weren’t around in the ’90s to witness the riots, just imagine what might have happened in Minneapolis had the murder of George Floyd gone unpunished.

The year is 2016 and the tap in Flint, Michigan is undrinkable. The electrifying young playwright Erika Dickerson-Despenza sets her “Afro-surrealist” drama 936 days into the Flint Crisis, as an embattled family seeks justice from both General Motors and the city government, fighting for their very survival. BLM is often cited in cases of police violence, but here, Dickerson-Despenza dramatizes a social travesty where the white power structure (and infrastructure) literally acted as if Black lives were worthless. (In 2017, a Michigan Civil Rights Commission report concluded that decades of systemic racism allowed the lead contamination of the .) Using a fluid and poetic approach, the author blends ideas of poison, contamination and filtering.

After regional runs in Baltimore and Washington, D.C. two years ago, this new play — written by Keenan Scott II and directed by Steve H. Broadnax III — takes its Broadway bow. Thoughts, set on a single day in Brooklyn, lets us eavesdrop on the inner lives of seven Black men mulling over joys and sorrows, as well as their gentrifying community. Scott employs a range of rhetorical styles suited to each character — spoken word, slam poetry, rapping — creating a kind of Under Milk Wood for BK. In the allegorical conception of the piece, characters represent major human traits: Wisdom, Depression, Passion and so forth. (In case you’re worried this world has too much testosterone, there are two women in the cast!)

We could put a date on this cathartic piece written by Aleshea Harris and directed by Whitney White — if Black people weren’t being shot every day by police. A fusion of ritual, protest, exorcism, and funeral rite, What to Send Up When It Goes Down has been presented before, most recently this summer at BAM, but until there’s justice, it will exist in past, present, and future. A seven-member ensemble welcomes the audience and makes clear the event they’re about to share is for the healing and reflection of Black audiences. White spectators are welcome — as witnesses to a tragedy in which they are complicit. Playwrights Horizons presents this re-mount of the interactive work, updated with the pictures and names of victims of racist violence. 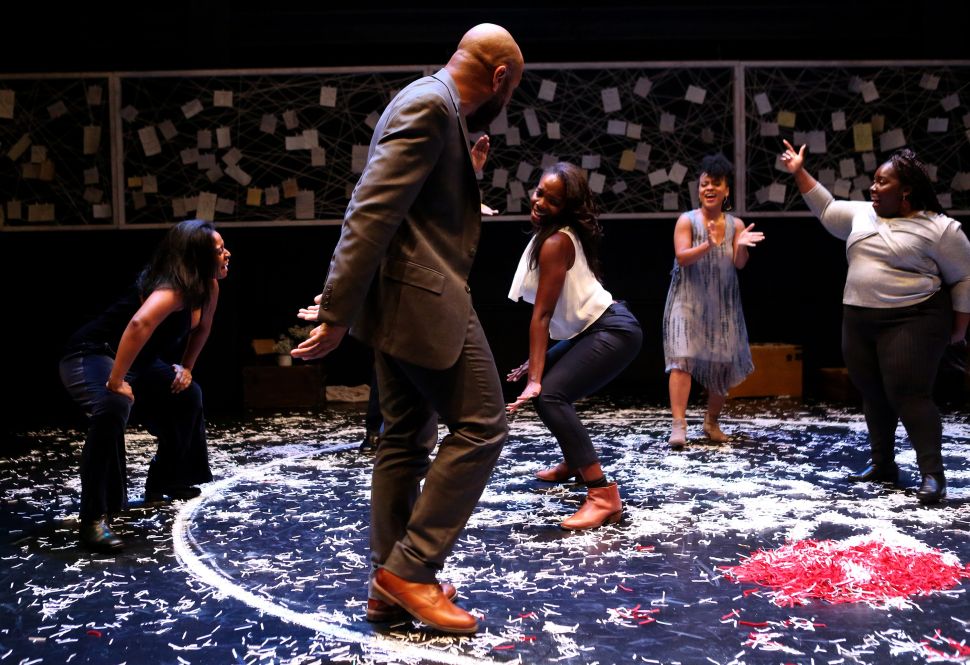