Psychoanalysis has occupied a very specific space within the West for over a century. Since the development of the practice in 1890 by the Austrian neurologist Sigmund Freud it has served as very rich ground for self-discovery and has turned into an interdisciplinary practice. The role of psychoanalysis and the larger elements of the unconscious within Louise Bourgeois’ work are explored in-depth within the exhibition “Freud’s Daughter” which is currently on view at the Jewish Museum

Bourgeois’ complicated relationship to the practice is what serves as the basis of the exhibit. “Freud’s Daughter” brings together over 40 sculptures as well as written works which are on view for the first time for a US audience. This show offers an expansive look at her work and many of the conceptual topics such as the body, the unconscious, sexual desire, and various materials such as  fabric, metal, paint, she experimented throughout her career.

“Freud’s Daughter” is curated by Philip Larratt-Smith who was also Bourgeois’ literary archivist for eight years, and someone who knew her well in the last half of her life. The show itself packs a lot in both in terms of the number of pieces on display as well as offering a dense amount of information. The relationship that Larratt-Smith and Bourgeois fostered is present in the show and can be seen within the various written works that were selected for it.

Between 1952 to the mid 1980s, Bourgeois began writing about her experiences undergoing analysis. She would engage with this for decades and it would come to offer Bourgeois another outlet in her life and art. They become a groundswell of deep suffering and complication throughout Bourgeois’ life and also became the basis of much of the work she created.

Bourgeois’ indoctrination into psychoanalysis resulted in topics she would explore throughout the next five decades. The pages on display are meant to function as a record of her therapy appointments and her own reflections on her experiences, but also give the viewer insight into who she was and her thought process. Bourgeois became very interested in the work of psychoanalytic scholars such as Sigmund Freud, Carl Jung, Marie Bonaparte, Melanie Klein (Freud’s granddaughter), and others. These influences come through in many of Bourgeois’ writings as well as the larger subject matter of the work.

Focusing on larger familial relationships with her mother and father in particular, “Freud’s Daughter” takes viewers on a journey through her unconsciousness. Bourgeois’ fraught relationship to her parents is a major theme that is seen throughout the exhibit. Her mother died in 1932, when she was in her second year at the Sorbonne where she was studying mathematics. The loss of her mother inspired her to change courses and study art. Bourgeois also had a very complicated relationship with her father who died in 1951, as his long time affair with her English tutor strained their relationship. Her role as  mother to three children and the wife of well known art historian Robert Goldwater, would also factor into her creative process and become a topic explored later on in psychoanalysis.

The writings are overwhelming to encounter. There is a lot to decipher within them and between 1955 to ‘60, Bourgeois’ art making career came to a complete halt. With the absence of creating art, psychoanalysis filled the void and this can be seen specifically within her writing from this time. Many of her own issues surrounding her father, and family in general fill the pages on display. While some pages are typed others are hand written from her personal notebooks which creates a new level of intimacy when viewing them. Some of them deal with her own anger and frustrations, while others deal with her family and her larger entanglement with psychoanalysis. There are even mentions of her fantasies of murdering her own sons and even castrations. In 1961 she wrote, “When I do not ‘attack’ I do not feel myself alive.”

According to Freud’s larger theories surrounding psycho-sexual development there are various stages that people pass through including the Oedipal complex. The Oedipal complex centers around a child’s desire to seek attention from the parent of the opposite sex. While there is not a conscious awareness of this desire due to repression and larger elements of socialization, Freud believed this played a role in child’s behavior and development. Although this is a widely upheld cornerstone of Freudian theory, it has been met with criticism over the years and has led many academics to offer alternative readings of his work. This can be seen particularly within feminist psychoanalytic theory which aims to center the female subject and oppression, and can be seen within the work of Simone de Beauvoir, Luce Irigaray and Julia Kristeva among others.

These larger psychoanalytic concepts can be seen in many of the works on display. Within Orange Episode (1990), a work on paper that features a dried orange peel as well as oil, gouache on board. The peel has been cut into a cartoon-like human form with overly exaggerated bulbous parts. The piece is in direct reference to her father. The form the orange peel creates is large and fleshy and becomes in-human and detaches away from the board it is on. While Bourgeois’ father would create similar drawings as portraits of her  growing up, it also left larger lingering feelings of resentment, anger, and sadness towards him. Orange Episode cultivates a larger tone of detachment and also not quite knowing what it is, and this uncertainty as well as complexity is visible within it.

Sexuality and the erotic is another topic that would be a driving force behind her work. The Destruction of the Father, an installation from 1974, which she created a year after her husband’s death, is a real exploration of psychoanalysis as well as later complicated relationships within her life. The work is based on a revenge fantasy which deals with the mother and children of a family murdering the father. The piece features a wall space that has been carved out and dimly lit with dark red lights illuminating half round spheres. It is very eerie and one of the most memorable works within the show.

Passage Dangereux (1997) is another large-scale installation that is unsettling. It combines a number of objects as well as Bourgeois’s sculptures within several cage-like structures that have been broken down into smaller cells or chambers. Some include mirrors and chairs that have been arranged on the floor while others are suspended in various positions. It is dealing with various stages people must pass through but it also seems to be a larger metaphor for development and Freud’s larger theories surrounding it. This piece perfectly maps Bourgeois’ larger relationship to psychoanalysis.

These kinds of biographical details were pivotal to her development as a person and also laid the groundwork for many topics she would revisit throughout her career.  Bourgeois is one of the most complicated and groundbreaking artists of the 20th and 21st centuries and this show only cements her status. It is also shedding light on who she was while also giving viewers brief glimpses into her artistic process and modes of being as a person.

The exhibit is on view until September 12, 2021 at the Jewish Museum in New York City. 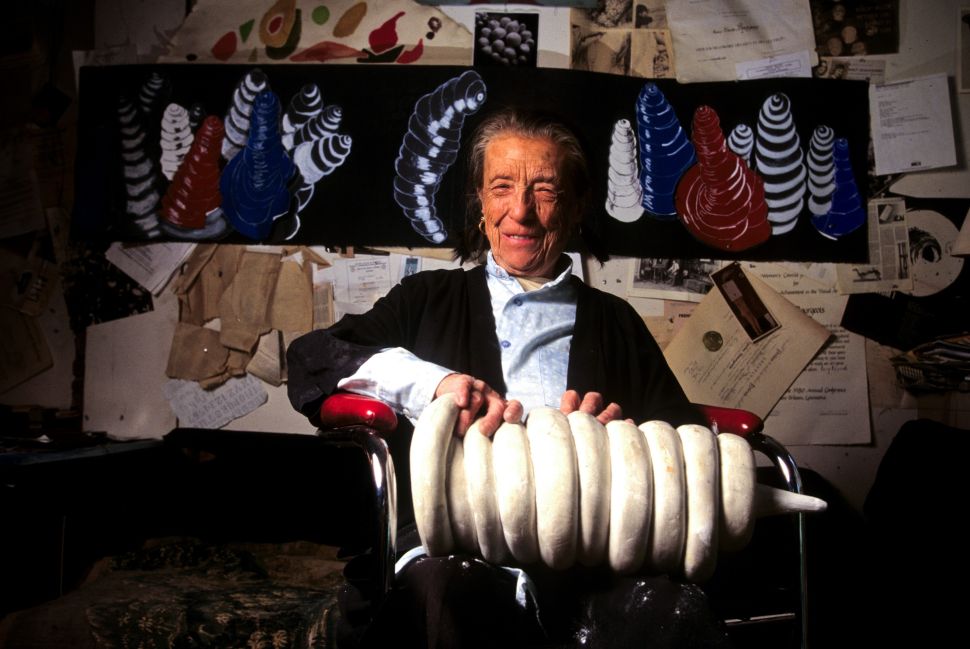