Alfred Hitchcock used physical location as architecture of the story in Rear Window, marooning a man in his New York apartment and creating a tapestry of intrigue around his neighbors. The Bramford apartment building setting of Rosemary’s Baby was chosen specifically by author Ira Levin as a nod to Dracula creator Bram Stoker. The film’s real-life location, The Dakota, is an iconic New York City landmark. Seinfeld, Sex and the City, Harriet the Spy—they all use their location to their advantage, interacting with the setting to weave it into the narrative itself.

Hulu’s Only Murders in the Building builds on this history successfully by focusing on a singular slice of New York life. The show’s one-block neighborhood is as much of a character as the human ones. Only Murders in the Building‘s setting is a very specific subset of culture — the kind of wealthy New York neighborhood where the hot dog guy knows your order and your super puts on a smile to deal with all your bullshit.

The show, which currently has four episodes available on Hulu, follows three strangers (Steve Martin, Martin Short and Selena Gomez) who share an obsession with true crime podcasts and suddenly find themselves wrapped up in one. When a grisly death occurs inside their exclusive Upper West Side apartment building, the trio suspects murder and employs their precise knowledge of true crime to investigate the truth. As they record a podcast of their own to document the case, the three unravel the complex secrets of the building which stretch back years.

Martin’s Charles and Short’s Oliver exist in the rarefied air of self-importance that only elder white affluence can bring. Anyone who has spent time in New York City can immediately identify their brand.

It’s in their shared preference for phone calls over texts (the upcoming fifth episode has a particularly great zinger about millennials); the reluctant and deliberately slow leakage of their vulnerabilities to connections both old and new. They’re modern fossils, aware only of their own fading relevance yet oblivious to pretty much everything else. Contrast that with Mabel’s (Gomez) youthful snobbery, and this small corner of New York becomes not only recognizable but oddly endearing. It’s universality sold through specificity. Generational and class divides that meld together because we’re all really just lonely creatures looking for connection.

A city as a character isn’t always a chic but empty grasp at profundity. It’s in the energy, the tone, the vibe. We know after a lifetime of friendship that Martin and Short have great chemistry together. Their fluid back and forth dovetails with the script’s bouncy energy, as crafted by creators Martin and John Hoffman as well as executive producer Dan Fogelman (This Is Us). The noir sitcom stylings from directors Jamie Babbit and Gillian Robspierre give the first batch of episodes a delightfully self-aware sheen that mixes and matches from the genres the show is parodying. It’s reflective of the carefree self-superior lifestyles of Arconia residents. “I’m an actor. I know how to turn on the charm,” Charles boasts at one point, after the audience is well aware that his socially inept character cannot. But the lead trio together very much can! Los Angeles is smoke and mirrors, New York is grit and charm. And Only Murders in the Building understands that.

Of course, much like the real true crime mysteries the show is both lampooning and celebrating, Only Murders in the Building could stumble to a disappointing resolution. It’s the nature of expectations and hype versus reality; the latter all too often proves to be anti-climactic. But Only Murders in the Building is rooted in its carefully designed ecosystem so well, that it may not matter. Chamber pieces that mostly take place in one location usually feel claustrophobic. But in the spacious multi-bedrooms of the Upper West Side, the shadows of the Arconia become an open playground for satire. 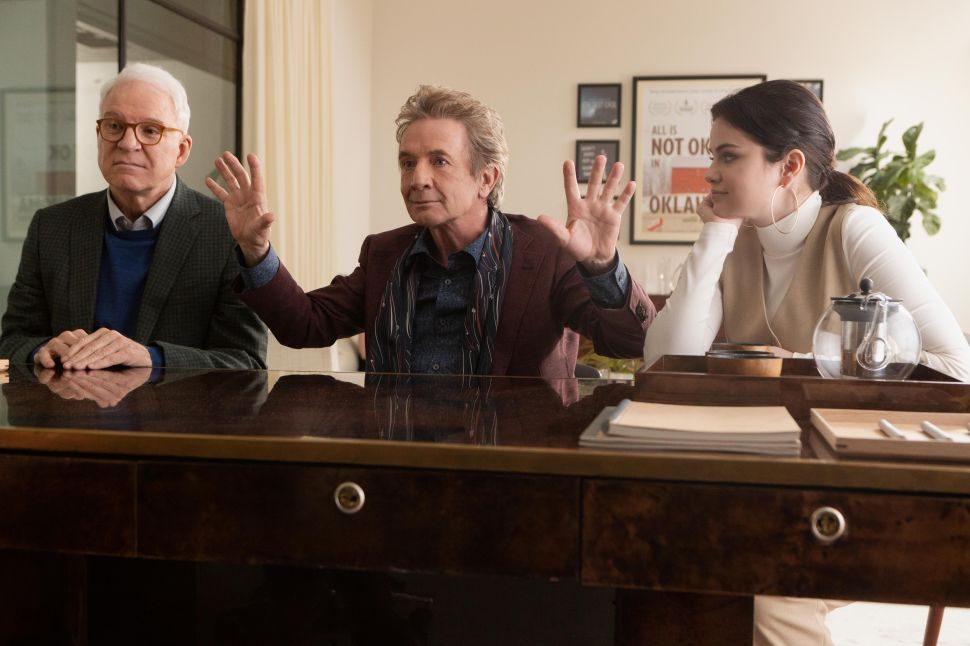