The Duke of Cambridge, Duchess of Cambridge, Prince of Wales and Duchess of Cornwall all made their grand return to the red carpet last night for the world premiere of the latest James Bond film, No Time to Die. While there was no shortage of celebrities (and royals) at Royal Albert Hall, there’s no doubt that Kate Middleton still stole the show, thanks to her glittering gold gown.

Duchess Kate made a statement in a stunning gold cape dress that just might be her most glamorous look yet. The royal looked the part of the ultimate Bond Girl as she arrived at the London premiere in a custom gown by Jenny Packham, which featured structured high shoulders, a cinched waist and strategically placed sheer paneling, with plenty of gold sequins and embellishments.

The built-in floor-grazing cape, which gave the illusion of long sleeves, was surely one of the most jaw-dropping parts of the look. The Duchess wore her hair in an elaborate updo, and accessorized with gold earrings by O’nitaa, which she also sported during the Cambridges’ Pakistan tour in 2019, a citrine cocktail ring, as well as Aquazzura heels.

It’s been nearly two years since Prince William and Kate attended a red carpet event; the last was for the BAFTAs in February 2020. It seems the Duchess of Cambridge has definitely missed red carpet dressing, and brought her formalwear A-game to the London premiere last night.

Even the star of the film couldn’t get enough of Duchess Kate’s look; Daniel Craig, who appears as Bond for the fifth and final time in No Time to Die, reportedly told the royal, “You look jolly lovely,” per People.

This isn’t the first time the royals have attended the premiere of one of the Bond films; Prince William and Kate were at the premiere for the previous movie in the franchise, Spectre, back in 2015, for which the Duchess also wore a Jenny Packham gown. Duchess Kate is a longtime fan of the British fashion designer, who is behind some of her most glamorous looks.

The Duchess of Cambridge’s dress last night was also a sweet tribute to her late mother-in-law, as Princess Diana wore a similar high-shouldered silver gown to the premiere of Bond film A View to Kill in 1985. Below, see the best pictures of Kate Middleton’s stunning James Bond-worthy look. 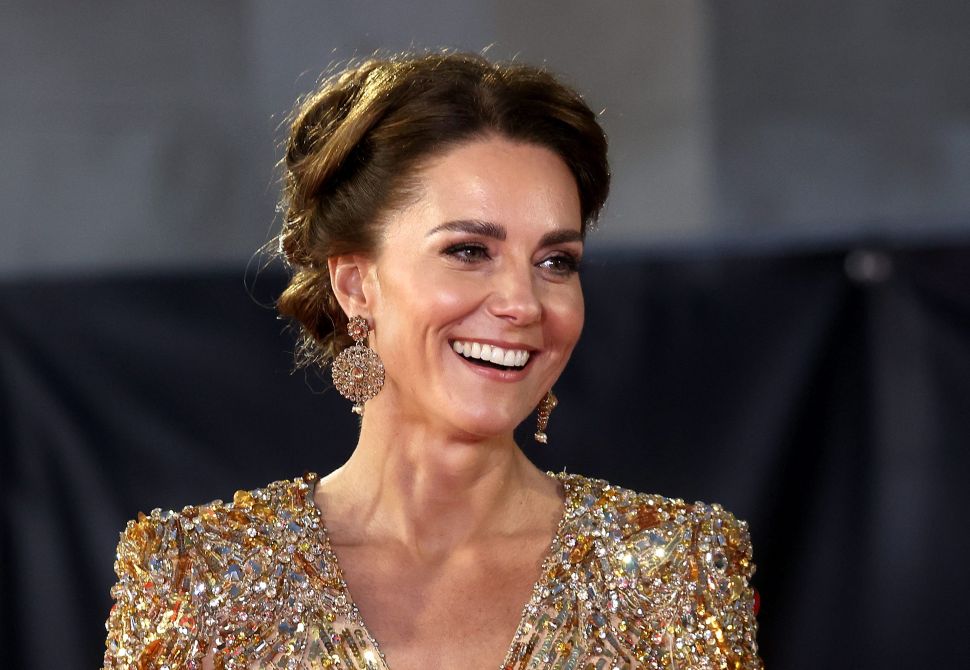