On a happy but nervous day in 1969 I moved into my first serious home in one of New York’s most famous, historic, glamorous and coveted Victorian landmark buildings, The Dakota.  It would have been a big step under any circumstances for a fledgling novice, new in town, green as chlorophyll, and just beginning a hopefully successful writing career, but I was doubly excited because my new next door neighbor was the one and only Boris Karloff!

Unfortunately, my timing was lousy.  Because, you see, the crowning monarch of movie horror had just died at age 88, and although The Dakota was also home to John Lennon, Lauren Bacall, Leonard Bernstein, Rudolf Nureyev and other notables, Karloff was the one I wanted to know most.  I found a cache of his fan letters in a garbage can near the service elevator but was too respectful to rescue them for posterity (and possibly sell them on eBay).  So I would never meet the Frankenstein monster in person.  Glumly, I confided my disappointment to the doorman.  “I’ve always loved him and now I live so close and yet so far and I will never meet him,” I confessed.  Without missing a beat, the doorman soberly replied: “He’ll be back.”

And so he will—every year at Halloween, when a whole new generation discovers the art of his madness and mayhem all over again in an annual marathon of his greatest hits from The Black Cat to The Old Dark House and everything in-between.  Now he’s back to stay in a terrific documentary called Boris Karloff: The Man Behind the Monster that sheds new light on the darkness that has shrouded him in mystery for nearly nine decades.  Fastidiously researched and directed by Thomas Hamilton, who co-wrote the screenplay with Ron MacCloskey, it unmasks the true identity of a soft-spoken British gentlemen born William Henry Platt but known throughout the civilized world as the most terrifying man alive and the father of the horror film industry.  Proceed at your own peril.

With the aid of Karloff’s only daughter Sara, much of the film concentrates on his most celebrated role—the menacing monster made of nails, bolts and human organs in Frankenstein, James Whale’s 1931 classic adaption of Mary Shelley’s novel that turned an unknown actor into the stalking robotic freak of the title.  The movie made him a star, but the years of struggling to make ends meet, the accidental way he got the role, and the numerous problems encountered while making the film are catalogued with riveting detail.  A gentle man, he hated the scene where the monster throws the innocent child picking daisies into the black waters of the lake to drown.  He called it “wanton brutality” and managed to get it deleted, alienating the director and causing havoc.  He wasn’t even invited to the premiere.  But hidden behind hours of daily makeup without a word of dialogue, he became a phenomenal overnight sensation, and went on to play assorted vampires, mummies and even a Chinese sadist with realistic demonic powers that made audiences scream (and scream for more) without losing any of his own sense of humor. When an interviewer asks him if he spoke any Chinese on the controversial 1932 film The Mask of Fu Manchu, the real voice of Karloff laughs it off incredulously: “Good lord, no.  It was a shambles—simply ridiculous!

Biographical details are sketchy, and I would prefer fewer references to film technology and juicier personal anecdotes.  But what’s there is mesmerizing.  His father was a diplomat in Bombay with seven children who brutalized his family and left them penniless.  His Anglo-Indian heritage subjected him to racist insults.  He had bow legs, a lisp and a stammer which never qualified him for stardom but he never bothered to correct them. He left home and ended up as a Hollywood extra in silent films in 1920, where his dark complexion and penetrating eyes made him a standout in ethnic and exotic roles.  Struggling through the Depression with no money and no work, he was instrumental in unionizing the studios, which won him admirers among fellow actors, but prosperity and fame came slowly. There were lean years and eight marriages, then Frankenstein changed everything.  Teaming up with his close friend Bela Lugosi in The Black Cat (1934) and speaking for the first time as the monster in Bride of Frankenstein (1935) certified his status, but eventually he grew tired of type casting. Stuck in a rut, the way out was Broadway.  So he gambled with a comedy called Arsenic and Old Lace, playing a man “who looked like Boris Karloff”.  It ran for three years.

But there was more to Karloff than “Boo!”  He played Captain Hook to Jean Arthur’s Peter Pan and in one of his most distinguished stage appearances he was nominated for a Tony award opposite Julie Harris’ Joan of Arc in Lillian Hellman’s adaptation of The Lark, which he repeated for NBC’s Hallmark Hall of Fame (an entire scene in the documentary is worth the price of admission alone).  In 1966, when he was retired and almost dead from severe emphysema, his career soared again with his recording How the Grinch Stole Christmas, and in 1968, one year before he died, he surfaced again, winning fresh raves as a retired horror film star whose life parallels the story of the mass murderer perched on top of the tower of the University of Texas in Austin.   Some of the rare footage from his late career includes Karloff spoofing his image by singing to a severed head on the Dinah Shore Show and discarding his wheelchair and oxygen mask to perfectly perform a musical number with Vincent Price and Red Skelton.  Not a wasted or superfluous moment anywhere.

This movie honors both requirements of any documentary you can call memorable.  It educates and entertains at the same time.  I still live next door to the scariest man in the morgue.  But after Boris Karloff: The Man Behind the Monster I now have another reason to smile every time I pass his front door after midnight. 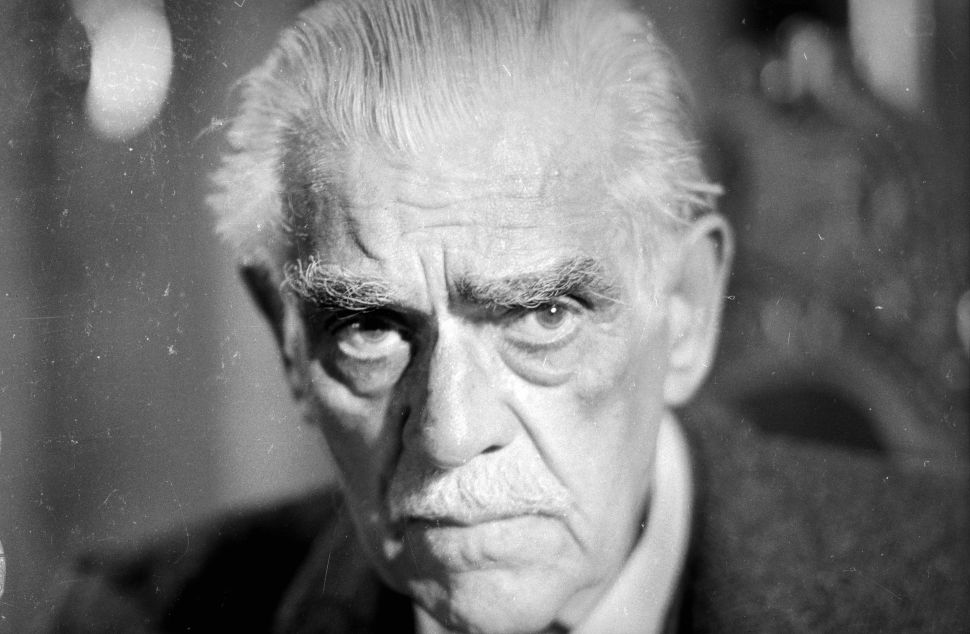