Shakespeare has been stepped on more frequently than snorted pure. Sanitized or streamlined versions of his plays have a longer stage history than the stuff you find in the First Folio. From the 17th to the 19th century, editors and actors-managers chopped, tweaked, and re-ordered scenes, freely eliminating characters and changing plots. A King Lear with a happy ending ruled the boards for 150 years. Only by Victoria’s reign was the idea of doing, say, Richard III by the book a neat stunt. We’ve been taking liberties with Will’s corpus since his corpse was still warm.

So it’s not that big a reach for Jocelyn Bioh to give The Merry Wives of Windsor a wholesale makeover for Shakespeare in the Park. And because she did so fearlessly and with love, the result is a total delight. No longer an Elizabethan sitcom set in the suburbs crammed with puns and regional gags utterly incomprehensible to modern ears, the 1597 comedy has become in Bioh’s hands a legit funny urban farce and celebration of Black life.

Bioh grew this lush garden out of rich but rocky soil. Merry Wives of Windsor (or, as it’s known by Renaissance scholars, Falstaff 2: Electric Boogaloo) is no one’s idea of top-shelf Bard. Instead, it’s generally regarded as a rush job to showcase the immensely popular character of Falstaff, the fat, forever lying and leching knight. It makes a better opera (Verdi) than play. English critic Max Beerbohm deplored Merry Wives as “the wretchedest bit of hack-work ever done by a great writer, and by us condoned for the sake of the love we bear him.”

Fast forward a century-plus and how times have changed. The scene that greets us at the Public’s Delacorte Theater (sets by Beowulf Boritt) is a block in Harlem comprised of a health clinic, a laundromat and a hair salon—all key businesses in a neighborhood peopled with immigrants from Nigeria, Ghana, Senegal, Liberia and elsewhere. The title matrons are here rendered as Madam Nkechi Ford and Madam Ekua Page (Susan Kelechi Watson and Pascale Armand, equally gorgeous and giddy), two uptown divas not to be messed with.

Enter one giant mess: Falstaff (Jacob Ming-Trent). Portrayed as a lifelong Harlem resident who comes off as a cross between Biggie Smalls and Tracy Morgan, this self-adoring hedonist intends to woo both well-to-do ladies and fleece them of what cash he can.

One example from the script will demonstrate Bioh’s deft alchemy. As the original Falstaff plots to seduce the wives with identical love letters, he boasts that “[Mistress Ford] is a region in Guiana, all gold and bounty. I will be cheater to them both, and they shall be exchequers to me; they shall be my East and West Indies, and I will trade to them both.” The lusty knight’s metaphors of sexual and financial conquest derive from European exploitation of South America and the Caribbean. In Bioh, this greedy swagger becomes: “[S]he is from a region in Ghana, all gold and bounty. I will be cheaters to them both, and they shall be sugar mamas to me; we’re gonna have the Ghanaian and the Nigerian jollof rice!” Thus Bioh decolonizes the source and infuses the remnant with culturally specific humor.

Such shrewd but humane jollity extends to the entire production, smoothly directed by Saheem Ali. The actors’ bouquet of rich accents, the yards of Kente cloth and vibrant prints used by costume designer Dede Ayite, the script’s bold rainbowing of emotion from sardonic hauteur to big-hearted jubilation: The production supplies all the hue and heart that, frankly, is lacking in the antiquated original. True, there are outsider voices in Shakespeare — Welsh and French, mainly — who exist to be mocked by speakers of “proper” English. That provincial disdain for immigrants has no place in this inclusive and cosmopolitan vision of Merry Wives.

Another Bioh innovation is inspired: She transforms the impoverished aristocrat Fenton from a man to a woman. Played by the luminous and graceful MaYaa Boateng, Fenton’s earnest, dignified passion, sweetly reciprocated by the ingenue Anne Page (Abena) creates a touching emotional center of the play. We watch Anne’s parents struggle to accept their daughter’s unconventional choice, their tradition-bound qualms overcome by love and acceptance.

The 12-member, all-Black cast is filled with perfectly cast troupers, including Gbenga Akinnagbe’s irrationally jealous Mister Ford; Kyle Scatliffe’s bonhomous Mister Page; Phillip James Brannon’s preening Pastor Evans; and Shola Adewusi as the addled yenta Mama Quickly. Do note: I got to Merry Wives late, and it only runs through September 18. If you can’t attend, not to worry: PBS will broadcast the production on Great Performances eventually.

It’s a night in the Park that got me excited about the future of theater — and new ways to see Shakespeare. Perhaps we’ve returned to the point where he’s no longer holy writ; to save the poor poet, we may need to knock down the mausoleum and put up a hair-braiding shop instead. 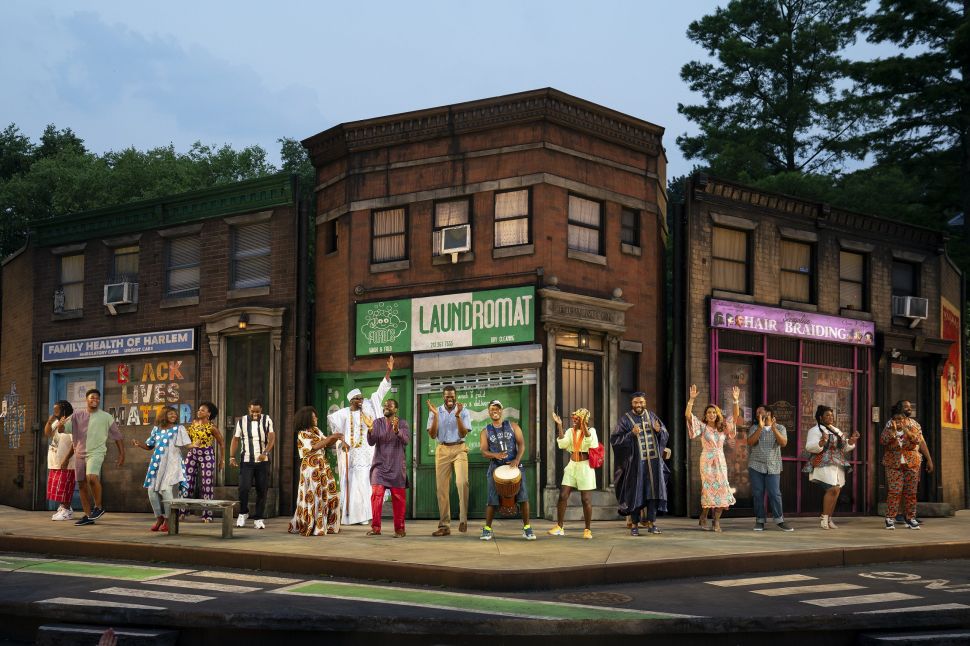