The Met Gala is mere hours away, which means those lucky enough to score an invite to quite possibly the most exclusive fashion event of the year are currently busy prepping for the big night. This year’s theme is all about American fashion, and while the attendees won’t descend upon the Metropolitan Museum of Art in their sartorial best until later this evening, putting together a Met Gala-worthy look takes time, so many of the guests are already holed up in their hotel rooms, in the midst of full glam and other preparations for the special event.

So, where do celebrities get ready for the biggest night in fashion? Well, a dreamy hotel suite is often the dressing room of choice for many Met Gala attendees. While there’s no shortage of luxe hotels in New York, year after year, celebs tend to flock to the same few glitzy locales, which are often located mere blocks away from the Metropolitan Museum of Art. Below, see the top hotels where Met Gala attendees prep for the Costume Institute Gala.

The Mark Hotel has long been a favorite of fashion’s elite; Met Gala attendees often flock to the Upper East Side haunt to prep for the big night, including Kim Kardashian, Irina Shayk, Selena Gomez, Tom Brady, Gisele Bündchen, Margot Robbie and Janelle Monae. The biggest stamp of approval surely comes from Anna Wintour herself, as over the past few years the Met Gala chairwoman has chosen to book a large suite at the Mark, a member of Preferred Hotels, to get ready for the evening. You can’t go wrong with any of the 152 rooms at the 77th Street hotel, but there’s no denying that a certain $75,000-a-night five-bedroom penthouse suite stands above the rest, and also happens to be Duchess-approved.

The Carlyle, a Rosewood Hotel, is just a block away from the Mark, and is another go-to for the Met Gala. Rihanna, Gigi Hadid, Kendall Jenner, Priyanka Chopra, Cardi B and Diane von Furstenberg are just a few of the Met Gala attendees that have previously chosen to get ready at the Carlyle, and while the celeb-adored hotel has many plush attributes, its close proximity to the Met also makes it a practical option. The Carlyle first opened its doors in 1930, and its star power extends far beyond just Met Gala guests. Over the years, the timeless Upper East Side Hotel has welcomed guests including John F. Kennedy, Princess Diana, Prince William, Kate Middleton and George Clooney.

The Surrey is another Upper East Side hotel that’s situated just a few streets away from the Met. The Surrey is the only Relais & Châteaux hotel in New York; it’s a more low-key and quiet alternative to its flashier neighbors, though it’s still just as luxurious. Ashley Graham, Serena Williams, Hailey Bieber, Celine Dion and Emily Ratajkowski have all gotten ready for the Met Gala at the Surrey in the past, but don’t expect to see any attendees prepping at the hotel this year, as it’s currently undergoing a major renovation, and is set to reopen in 2023.

The opulent Pierre, a Taj Hotel, is located a touch further downtown, on 61st Street right off of Fifth Avenue, and its ornate exterior happens to provide a very chic backdrop for any celeb departure and arrival photos. Emily Blunt, Gigi Hadid, Tiffany Haddish, Cole Sprouse, Kate Bosworth, Zoe Saldana, Michael B. Jordan and Lili Reinhart are just a few of celebs who have gotten ready for the Met Gala at this plush hotel. 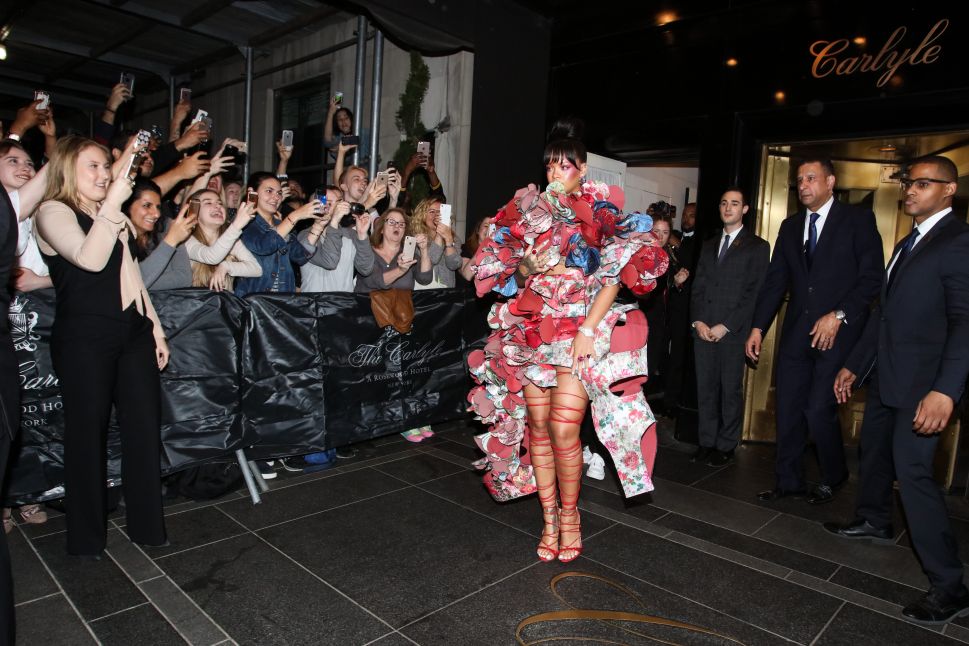