On Tuesday, Selkirk Auctioneers & Appraisers, a St. Louis-based auction firm, sold a cave containing Native American artwork dating back over 1,000 years to an anonymous buyer. The purchaser paid $2.2 million for the Missouri cave, which the auction firm has heralded as “the most important rock art site in North America.” The artwork within the cave includes nearly 300 prehistoric glyphs which indicate the meanings of words and sounds, as well as drawings of mythical creatures, weapons, humans, and many other designs. Present-day members of the Osage Nation, the Midwestern Native American tribe whose ancestors were the ones to create the cave art, are expressing devastation in response to the cave’s sale.

“Our ancestors lived in this area for 1300 years,” the Osage Nation statement said; the tribe also said that the sale was “truly heartbreaking….This was our land. We have hundreds of thousands of our ancestors buried throughout Missouri and Illinois, including Picture Cave.” It’s unclear how such a clearly hallowed site came to be available on the auction block; the cave was sold along with the 43 acres of land that surround it, and its future is currently uncertain.

“Auctioning off a sacred American Indian site truly sends the wrong message,” Carol Diaz-Granados, a research associate at Washington University in St. Louis who’s spent two decades researching the cave with her husband, told the Associated Press. “It’s like auctioning off the Sistine Chapel. You get stick figures in other rock art sites, or maybe one little feather on the top of the head, or a figure holding a weapon. But in Picture Cave you get actual clothing details, headdress details, feathers, weapons. It’s truly amazing.”

In terms of caring for and exalting Native American art, the country has a long way to go: just last year, the Metropolitan Museum of Art hired its first ever Associate Curator of Native American Art. 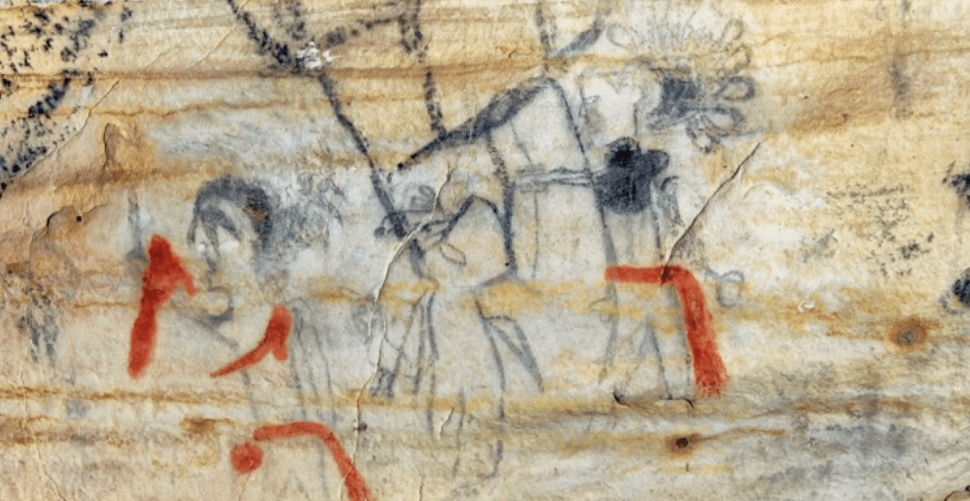