Max Borenstein has worn a lot of different hats over the last decade: architect of the blockbuster MonsterVerse franchise, broadcast TV creator (Minority Report), and cable dabbler (AMC’s The Terror: Infamy, HBO’s upcoming buzzy Los Angeles Lakers series). His latest film, Netflix’s 9/11 drama Worth starring Michael Keaton, is the first in which he serves as both writer and producer.

Perhaps its fitting that the title comes on a project he’s been working on since the mid-2000s. Persistence, timing, and a global streaming service hungry for buzzy content turned a long shot into a reality. The Observer spoke with Borenstein about distilling the dense and tragic process of valuing a human life into a narrative film and how the resulting movie, based on Kenneth Feinberg’s 2005 novel What is Life Worth?, isn’t really about 9/11 at all.

Observer: Worth is your first feature film as both a writer and producer. How does that affect the mental math when you’re thinking about the balance between art and commerce?
Borenstein: That’s a great question. I think the truth is that the script began its gestation I guess 15 years ago. I wouldn’t have known how to think about commerce in this business anyway, at the time, because I was simply attracted to the idea of the story and was writing it at least more for myself as an exercise of trying to find something that I was emotionally interested in. It was during the writers strike in 2007 and ’08. I found this story and realized that this was the kind of thing that I was interested in, but wasn’t a thing that anyone at the time was interested in paying me for. And so, it’s the kind of thing that has to be a labor of love. I wasn’t thinking about commerce at all. That kind of saved the day, in that respect.

Then years passed and had many, many almost moments where it became only a question of how can we find a way to make this financially viable?  As time passed, a certain amount of the raw immediacy of 9/11 began to heal and perspective allowed us to look at this movie in a more universal way, rather than being something that was really connected to that raw nerve. I think the time became more right.

You’ve previously said you began writing the screenplay in 2007-’08. How did the story change, if at all, from its original iteration to what it is now and how have you changed as a storyteller in that time?
I think in terms of the film itself and the story, the lens of it or the skeleton of it remained very much the same throughout those years.  It was more a situation of a film that’s challenging to mount because it’s a grown up subject matter and without any underlying intellectual property or comic book connections. These are harder and harder to get made. It was a script that had really great reactions from people. And so, it had a sort of life in the community as something that people still remembered, and passed around, and cared about.

Then over the course of those years, I grew up from being an infant in the industry to having a little bit more success. With everything that came, I was always thinking about this project and trying to use any new connection.

You mentioned the ‘grown up’ subject material. The legal and financial ramifications of 9/11, at first glance, seem to be a very dense and heavy topic. How did you go about synthesizing it a compelling narrative?
On the surface, I suppose it sounds dry, but right under the surface, what it really is, is the story of the humanity of all these people who’ve lived through this and were trying to move on with their lives in some way. And so, it’s extraordinarily dramatic. But the challenge between finding a dramatic, active story, and certainly something that can fit two hours that synthesizes the extreme pragmatism of the bureaucracy of the story, and the engine of the bureaucracy, and the emotional heft of this extraordinary, intense moment in people’s lives. The stories within that, that are shocking and encompass a lot of messy, interesting, fascinating dilemmas, was the challenge.

Ken Feinberg [played by Michael Keaton], as a protagonist, serves as our eyes and ears in it. He’s every person who experienced this story, as he’s trying to do his pragmatic work, which is execute the law that was passed and to the extent that he can, help families move on. But then he finds himself thrown into a much more complicated and difficult situation than he would’ve ever anticipated. And one where it becomes really an emotional journey for him as a person and of course, I think a redemptive, hopeful story about the possibility of how our government and good people working within a government can help people, even citizens, when operating from a place of empathy, rather than arrogance, or partisan divide.

It’s a side of 9/11 that we perhaps don’t always consider and the movie helps to put an individual face on a widespread tragedy. You seem to want to pit rationale against emotion before finding a common ground, which dovetails with Feinberg’s character arc. Now, I’m sure you want audiences to come to their own conclusions, but I have to assume there are some intended messages you hope stick with audiences more than others, correct?
Yeah, certainly. I mean, I think you’ve spoken to it really well and beautifully just now, which is that I think there are no villains really in the film because the events and the tragedy that began, this happened off screen. They happened before the movie, essentially, at the very beginning, but it’s not about 9/11. It’s about how to move on, both from a large scale government standpoint of the needs of the country as a whole, the economy as a whole, which affects individual lives, but then individually for each of the family members impacted.

And so for Ken, caught in the middle, as someone whose job is to ensure that the big broad economy gears keep churning, which is important and has human impact in an abstract way. And then, these individuals who have just suffered and endured the most profound loss imaginable. How do you thread that needle as a human being? How do you retain empathy? I think empathy is the answer. For Ken, he wasn’t able to change the law, but he was able to realize that being effective has to come second to being empathetic to the people that he was dealing with. And then through empathy, he was able to actually succeed in the pragmatic task he was assigned, but he had to first realize that he had to be willing to fail in the ethically and the rationality department, in order to ultimately succeed in the human department.

Worth arrives on Netflix Friday, September 3. 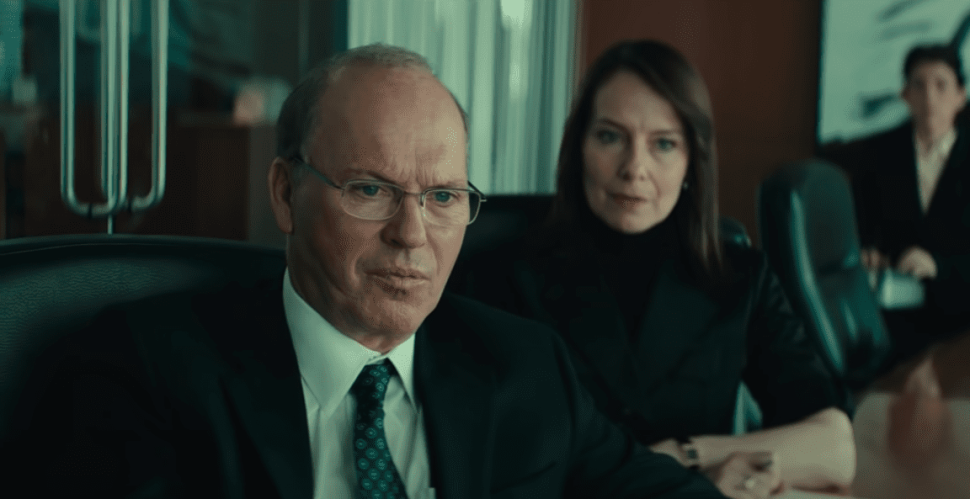