Great news, theater folx: Antoinette Chinonye Nwandu fixed Waiting for Godot. The fearless new playwright took Samuel Beckett’s much-endured 1953 classic and gave it a relatable context, emotional stakes, and an ending that doesn’t send audiences staggering out in search of a razor blade shop. Pass Over, Nwandu’s Broadway debut, is remarkable not only for being the first drama to open on the Great White Way after 528 days of pandemic lockdown, but for improving on a piece that often feels like it lasts 528 days.

Forgive the clowning. The Beckett estate will survive, and I remain an admiring student of the absurdist touchstone which launched a thousand imitations. What modern dramatist doesn’t owe a debt to his perverse, gallows-giddy fable of two tramps locked in philosophical limbo, waiting vainly for the big G and killing eternity with forlorn, loopy banter?

Nwandu’s 95-minute exorcism, while built on the bleached bones of Godot, is its own beast. Pass Over premiered at Chicago’s Steppenwolf Theatre in 2017, played Off Broadway at LCT3 the following year, and now ushers in an exciting chapter in Broadway history. The three-actor play is the first of several new or revived works by Black authors, making this fall one of the most diverse and challenging we’ve seen in—well, ever.

Using muscular, musical language and splicing genre with DJ aplomb, Nwandu shows two twentyish Black men, stuck on a street corner, whose existential dread is quite concrete: don’t get shot by cops. Moses (Jon Michael Hill) and Kitch (Namir Smallwood) inhabit a time and place, the program tells us, simultaneously located in present day, 1855, and 1440 BC, as well as a ghetto street, a plantation, and ancient Egypt. If this seems a daunting historical pastiche for sets and costumes (by Wilson Chin and Sarafina Bush, respectively), not to worry: the design is contemporary: city lamppost, barrel, a tire, and two guys in scuffed and grimy street clothes.

In their verbal dimension, Moses and Kitch employ a familiar urban patois: profane bluster, braggadocio, and goofy riffs heavily salted with the n-word, their thoughts ping-ponging from a yearning to “pass over” into the promised land (meaning variously wealth or death) and psyching each other up for another day of stasis and dread. They quibble; they quarrel. Are they “fixta git up off dis block for real?” Kitch asks. “Not fixta,” Moses snaps. “We iz.” So much history and suffering in that gap between fixta and iz.

As in Godot, the emphasis is not action, but reaction, repetition, frustration. What is it that holds these men back from rising “to my full potential,” as they mockingly put it? Poverty, racist cops, shaky faith, murdered friends, universal human frailty? Nwandu tests each element in her tightly strung, bounce-room volleys of dialogue, even as she tightens the figurative rope around Moses and Kitch’s necks.

Breaking up their cycles of chatter are provocative cameos from two white interlopers: Mister, a young man carrying a picnic basket in search — Red Riding Hoodishly — of his mother’s house, and Ossifer, a sadistic beat cop who takes special pleasure in frisking the “boys.” Both are played splendidly by the rawboned, hawk-faced Gabriel Ebert, doing double duty as the quintessence of caucasity. Mister is excessively formal and politely, inviting Moses and Kitch to sup from his basket’s bottomless store; Ossifer is casually contemptuous, having established a creepy familiarity with the people he both protects and terrorizes.

When playwrights address heavy social issues, they tend to reach for gritty realism, broadcasting gravitas: from Arthur Miller to Lynn Nottage, naturalism has been the default mode to get the message to the choir. What makes Pass Over liberatingly unstable is the utter freedom with which Nwandu navigates moral and aesthetic categories, gliding from urban comedy to horror movie and finally (no spoilers) to a transcendent, Edenic release from reality.

At every design and performance level, Danya Taymor’s glossy production is superbly realized and executed. Hill and Smallwood — the former as angsty alpha the latter as frisky beta — make a fluid, endlessly engaging duo, their virtuosic physical and vocal flourishes choreographed down to the minutest fist dap. Tonal changes from earlier versions are marked improvements. In the Chicago and Off Broadway iterations, dialogue was brutally interrupted by the crackle of gunfire, causing our heroes to hit the ground. Here, sound designer Justin Ellington’s woofers release a low, insinuating hum that makes Moses and Kitch freeze in their tracks. Abstracting the threat of violence cranks up menace to an unbearable degree.

If Pass Over were merely a rage-signaling Black allegory, a modern-day anti-lynching fable that hoisted dramaturgical placards with the requisite acronyms—BLM, ACAB, et cetera—it would still be worth seeing on Broadway. But Nwandu and Taymor orchestrate a bigger, bolder finish. With a massive assist from Chin’s set, they end on a spectacular, surreal note of redemption, a plea for utopian empathy. Rather than wallow in tragic futility, Nwandu breaks the circle. The world we return to may not be the promised land, but it can be better. What are we waiting for? 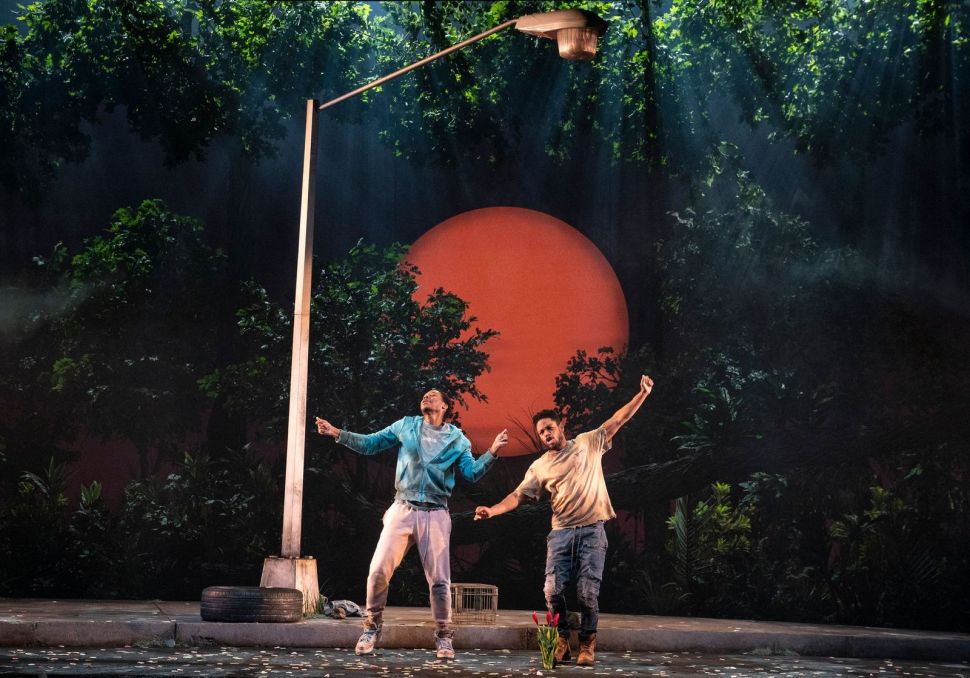