After over a year and a half of silence, the Metropolitan Opera came roaring back last night with a captivating new opera to open its 2021-2022 season. Terence Blanchard’s tuneful Fire Shut Up in My Bones made history in more ways than one.

To begin with, it’s the first opera by a Black composer ever to be staged by the often-stodgy Met. More importantly, perhaps, this is an opera with legs: Blanchard’s expertise assures it’s going to be revived at the Met and elsewhere for decades to come.

In this piece, the composer demonstrates an easy mastery of the manner that is basic to all successful opera, whether in the 18th century or the 21st. He sets the text—spoken, recitative or full-out arioso—to “float” easily above a dynamic orchestra movement. As a jazz musician, that movement may be, for instance, a 12-bar blues, which Blanchard employs with the ease and fluidity with which Mozart might have used a minuet.

Librettist Kasi Lemmons structures the opera as a memory play—a “present” with protagonist Charles bent on bloody act of revenge, flashing back to his childhood experiences of being an outsider. This technique gives Blanchard the freedom of depicting scenes in real time or filtering the event though narrative arias colored by Charles’s emotions.

That is where Blanchard’s virtuosity, I think, becomes a bit of a mixed blessing. Given the dramatist’s classic choice of “show or tell,” he sometimes does both. The central dramatic beat of the piece—the child Charles is molested by an adult relative—the opera presents in a whole bouquet of ways: the event itself, an soliloquy of reaction immediately after, a dream ballet and finally a confessional narrative by the adult Charles.

Every one of these musical solutions is honest, adept and, in isolation, deeply moving. But in the context of the opera, it feels like we are hearing the same story repeatedly, without even any Rashomon-like variation.  At its current length of two and a half hours, Fire Shut Up in My Bones is in the running for best American opera of the 21st century. Trimmed of perhaps 20 minutes of restatement and filigree, I think it would be a clear winner.

At whatever length, this opera offers abundant vocal and dramatic opportunities to the cast. Baritone Will Liverman took his lyric voice to the very limits of its capabilities in Charles’s violently emotional arias. And in more reflective moments, he revealed a piano sound so delicious you couldn’t help falling in love with him purely on the basis of timbre.

Soprano Angel Blue took on a curious track of Muse-like roles with portentous names like “Destiny” and “Loneliness” with the golden tone and radiant stage presence we know so well from her Porgy and Bess two years ago. This time around she has added to her repertoire of bewitching effects a glimmering high pianissimo and a voluptuous richness in middle voice that would not be out of place for Wagner’s Kundry.

But, just as Gypsy ends up being about Madame Rose, soprano Latonia Moore as Charles’s mother Billie deftly picks up Fire Shut Up in My Bones, drops it securely in her pocketbook and saunters home with her new property. The diva’s spotty Met career thus far has included some strong performances of Aida as well as a Madama Butterfly as ravishing as I ever hope to hear. Now, given a complex and exacting prima donna vehicle, Moore has left blood on the stage in a performance comparable in effect to Karita Mattila’s Salome or Anna Netrebko’s Manon Lescaut.

In contrast to the Met’s sometimes less than enthusiastic treatment of new operas, the company has heaped luxury upon this show, including dauntless conducting by music director Yannick Nézet-Séguin, a silky smooth ID check, and an eight-performance run. And the company is exactly right: Fire Shut Up in My Bones is a simply wonderful reason to return to the opera. 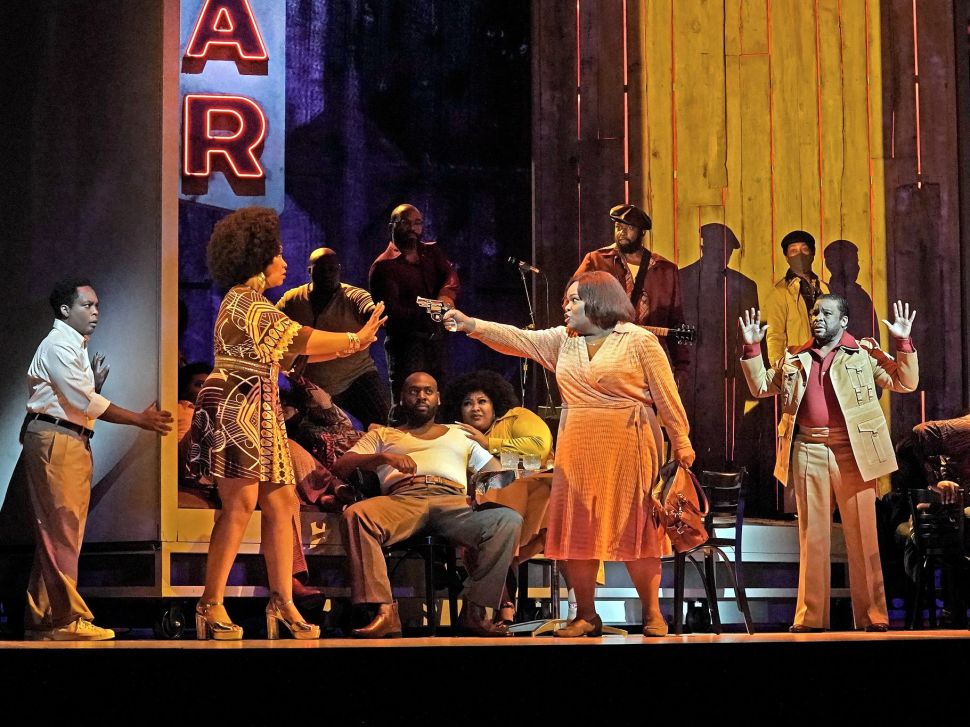