The artist Shannon Cartier Lucy materializes in our Zoom call in a room flooded with Nashville sunshine; her dark, straight hair frames a glowing face sporting a huge grin. Lucy’s relaxed, luminous countenance seems all too fitting for an artist at the top of her game, which she is. Her sunny demeanor also acts as a bracing rebuttal to the paintings in her new exhibition, “The Loo Table,” which opens this Saturday at Chinatown’s Lubov.

Lucy’s creations aren’t strictly dark or depressing, but they radiate a singular tension that could be associated with anxiety or sadomasochism or manic obsession or perhaps none of these things; the ambiguity is the point. Regardless, each little scene gives you pause. A woman stares intently at a bright white bedspread, her nose inches away from the material. Four pairs of underwear lie in a neat row on a flatweave rug.

“This show in particular started with a painting of a girl with a giant knife and fork,” Lucy told Observer. “I looked at that painting and I go okay, she’s sitting at a table, and I started looking at tables and I thought, I want keep the show’s title so simple that I’m not trying to force someone into a way of seeing. How do you do that, but at the same time create intrigue? And so I thought of this type of table called the Loo Table and I thought, what a strange title. It reminds of my name, Lucy. People used to call me Loo. So I thought Loo table; It’s kind of timeless. It’s more interesting than calling it ‘The Table’ or ‘The Dining Table.'”

January 2020’s “Home is a crossword puzzle I can’t solve,” Lucy’s first show at Lubov, sold out nearly instantaneously and garnered rave reviews. The paintings, which largely featured women arranged in distinctly off domestic dioramas, are unforgettably eerie and cinematic in a sideways manner, as though Yorgos Lanthimos had spontaneously decided to adapt Alice in Wonderland.

Lucy’s recent triumphs are also the products of an epic origin story, which has been oft-repeated since her 2020 re-emergence on the New York scene after a hiatus of a decade. Here it is in a nutshell: after studying art at NYU in the late 90’s, Lucy logged promising solo shows in her 20s before a series of destabilizing factors — a shattering breakup, drug addiction and a departure from the city — led her to set aside her creative pursuits and pursue a master’s degree in psychotherapy.

For more than 10 years, Lucy didn’t make any art at all. “Looking back, it was so frustrating and confusing,” she said. “Emotionally I broke down and I wasn’t able to paint for a while, and thank God that happened, because it gave me that space to rearrange my inner workings and emotionally integrate whatever I had gone through in the past. And for me it took a few years. But not making art felt really uncomfortable, because that never goes away, that way of seeing.”

Then in 2017, like a bolt out of the blue, Lucy ran into her ex-husband and felt the impulse to paint a scene she’d previously envisioned as a sculpture: a goldfish in a bowl perched on a lit stove. 19 more paintings quickly gushed out, and the new work captured the attention of Francisco Correa Cordero, Lubov’s founder. Lucy has been on fire since resuming her practice, and will follow up her second Lubov show with exhibitions with Massimo De Carlo in Hong Kong (fall 2021) and Night Gallery (November 2022).

In an artist statement on her website, Lucy says that she grew up with a parent with schizophrenia, noting that it wasn’t uncommon for her to discover household items stashed in unlikely places. But her paintings can’t be reduced to childhood-informed studies of objects in juxtaposition. The artworks in “The Loo Table” are loosely thematically linked, but to force a concrete narrative would be pointless; her subjects feel less like individuals and more like emotional talismans. There’s a through-line of wry humor in a canvas like Chair Self-Portrait, in which a long-haired figure tied to her seat lies prostrate before two indifferent onlookers.

The autopsy, which lays bare a dead dog’s guts, is counterintuitively sweet. While completing the deceased Dalmatian, Lucy drew inspiration from the hunks of meat and trussed up prey often found in classical still life paintings, but she didn’t want to create something that would immediately cause a viewer to recoil. “How could I kind of bring that same horror-ish death and truth into a painting, but soften it?” Lucy wondered. “By making the dog obviously a pet. There’s that human value to it that shows the dog was loved.”

Lucy, who lives with her boyfriend, is herself presently enjoying an abundance of love and security that comes with a packed schedule and creative drive. “This is beyond my wildest dreams in terms of feeling secure,” she beamed. “I can plan my life. I can’t believe it. I’m more than grateful.” 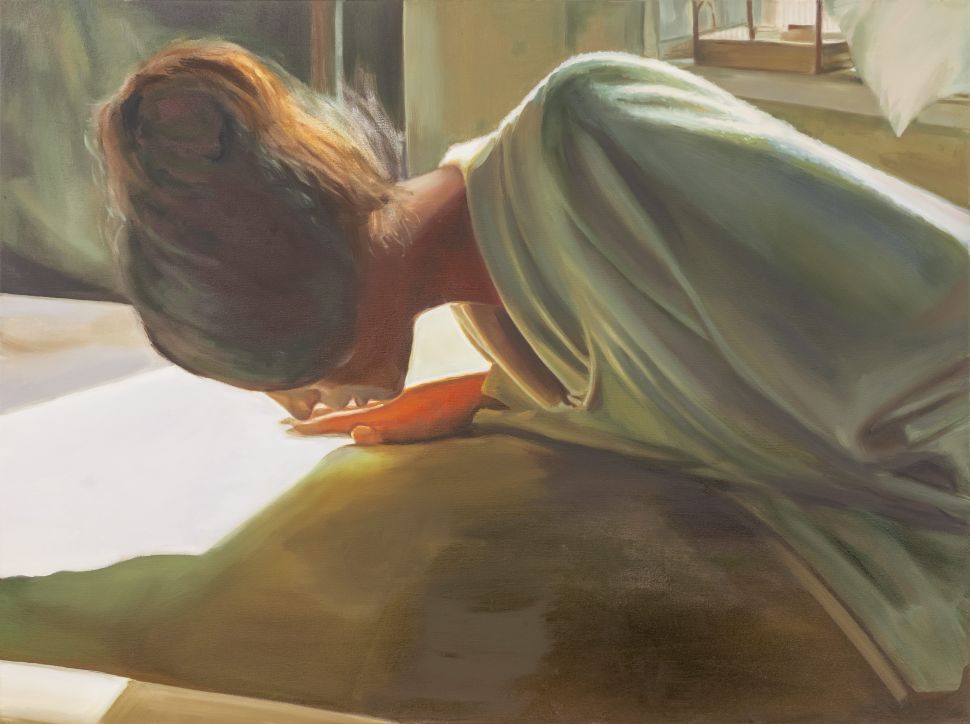