It’s beginning to look a lot like Christmas at the Macbeth’s.

The movie version of the Scottish Play—which got the 59th annual New York Film Festival off to a roaring, stark-raving start on Friday, September 24th—gets a limited theatrical release on Dec. 25 (then begins streaming Apple TV+ three weeks later). You’d think a less festive day of the year might be more appropriate for this film, but no: A Christmas Day release allows it a full qualifying week of Oscar eligibility.

Not that the cast and crew of The Tragedy of Macbeth are hurting for little gold men. Stars Denzel Washington and Frances McDormand and McDormand’s husband, writer-director Joel Coen have amassed ten (count ‘em, ten) Oscars, with McDormand acquiring a matched set earlier this year for performing and producing Nomadland. She’s taken on producing duties again for Macbeth, as her brother-in-law Ethan Cohen—who’s been Joel’s constant collaborator for nearly 40 years—is sitting this one out. There’s less need for a co-writer when Shakespeare is on the case.

The trio met journalists Friday morning following the film’s pre-festival screening at Lincoln Center’s Walter Reade Theater, and enthusiasm was in the air. The press was impressed.

For McDormand, Lady Macbeth was an early calling—the earliest, in fact. “The first thing I ever did — the first thing that got me hooked on wanting to be an actor for the rest of my life,” she recalled, “was the sleepwalking scene from the tragedy, and I did it when I was 14. I’ve pretty much been practicing and rehearsing for it for 50 years, so I feel like it had a kind of fated inevitability to it. That it ended up being sculpted in this way seems absolutely perfect.”

Her husband, she said, didn’t exactly see it that way. “I had asked Joel a couple of times if he’d be interested in doing it on stage, and he said, ‘Absolutely not!’ Had no interest in doing theater.” She pursued her dream elsewhere for a good 15 years and then gave up. Then in 2016 she got to play Lady Macbeth at Berkeley Rep for director Dan Sullivan, “who knows his way around Shakespeare and the theater. I think that that inspired Joel to think about it as a screen adaptation.”

Coen concurred. “Dan very generously let me sit in on some of the rehearsals,” he said. “I’m really not a stage director—I wouldn’t know what to do—but I started thinking about ‘Macbeth’ as a movie. Unlike doing something on stage where there is one visual metaphor for the whole thing, movies are very much about what you’re looking at, from where you’re looking and how long you’re looking. That’s what distinguishes movies from theater.”

Impressed with what his wife was doing in the part on stage, Coen began thinking of the show as a project they could work on together and do as a movie. Suddenly, the property became more accessible to him and he started hunting for visual equivalents to the language.

As for casting the title character, “it was a pretty short conversation,” Coen said. How short? “Denzel said yes.” Producer McDormand seconded that: “You don’t make a list for a generation of Macbeths. One is born, and they play it.”

A graduate of Fordham College at Lincoln Center (Class of ’77), Washington dirt-kicked that compliment aside and joked that “the Yale and Juilliard Mafia” would be coming after the Coen and McDormand for that decision. But their choice will provoke no such mob reprisal. The actor has collected nine Academy Award nominations (and two wins) in the course of his career, and if indeed his Macbeth puts him in Oscar contention, he’ll equal Laurence Olivier’s all-time record. (Ironically, Macbeth was a role that Olivier came this close to filming in the late ‘50s with his then-wife, Vivien Leigh.)

“This is a fascinating journey for me,” Washington confessed. “I went to school 1,000 feet from here and played Othello at 20,” he said, referring to Fordham College’s proximity to the Lincoln Center HQ of the NYFF. “Didn’t know what I was doing, so this is a long 1,000 feet.”

His immersion in Shakespeare didn’t stop there. Two years out of college, he found himself in Central Park, playing Aedile to Morgan Freemen’s Coriolanus and getting quickly killed after three clangs of the sword. When he returned to Shakespeare in the Park in 1990, it was in the title role of Richard III. On film, he was Don Pedro in Kenneth Branagh’s 1993 Much Ado About Nothing, then back to the boards as Brutus on Broadway in 2005’s Julius Caesar, directed by the aforementioned Dan Sullivan. Recently, he making plans bring his King Lear to Broadway until Glenda Jackson pounced with hers and scared him away (for the time being, at least).

Washington, 66, and McDormand, 64, may well be the oldest Lord and Lady Macbeth on film —and that senior status works to the advantage of their performances.

“In Joel’s adaptation,” said McDormand, “we are exploring the age of the characters. We’re postmenopausal. We’re past childbearing age. That puts a pressure on their ambition to have the crown. I think the most important distinction is that it is their last chance for glory.”

Washington called it the characters’ “last go-round”: “They’ve been stepped over by kings, and they want that throne.” Thus, murder is the only means of getting there.

Held mostly to a single, stagebound place of action, Coen countered with a wildly original visual style to open up the story. Rather than troop off to some overused castle in a faraway location, he shot the whole thing on a Los Angeles soundstage in ravishing black-and-white—but with enough smoke-and-mirrors subterfuge to look like the real thing. His creative accomplice is his Inside Llewyn Davis cinematographer, Bruco Delbonnel, a five-time Oscar contender.

How severe and austere and downright unique is this film? All three of Macbeth’s cackling witches are played by one bizarrely talented British actress, Kathryn Hunter, with weird body contortions and vocal gravel galore. She boils and bubbles every time she’s on the screen.

Coen and his two leads dominated the press conference, of course, but a trio of key supporting players—Harry Melling (Malcolm), Moses Ingram (Lady Macduff) and Bertie Carvel (Banquo)—got their licks in as well. Carvel, who has contended for a couple of Tonys in recent years (as the harridan headmistress of an English Elementary School, Miss Trunchbull, in 2011’s Matilda and as Rupert Murdoch in 2017’s Ink), was especially spot-on at explaining why the tragedy of Macbeth remains — even after more than 24 film-tellings, starting in 1906 — eternally topical.

“What makes the play so political,” the British actor surmised, “is that there will always be murderous tyrants, opportunists, ambitious people led down the primrose path, but it’s what everybody else does around them that makes it really dangerous. It’s the reason that these plays get done again and again and don’t lose their steam because you don’t have to look very far to see that kind of stuff in the corridors of power anywhere in the world today.” 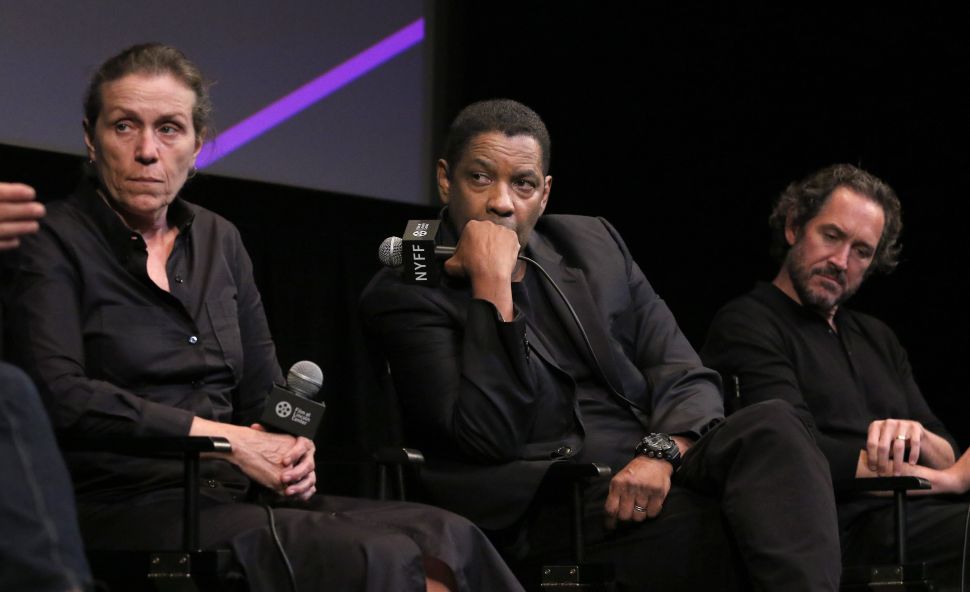