The problem with perfection is that it sets us up for a powerful downfall when the inevitable misstep finally occurs. I’ve been a consistent Ted Lasso convert dating back to Season 1 and all through last week’s choppy but ultimately successful experimental detour in “Beard After Dark.” The show’s unrelenting optimism, precise feel-good prowess, and deft mixture of pain and humor have combined to deliver a unique sitcom experience (we should expect nothing less from the great Bill Lawrence). But the tenth episode of Season 2, “No Weddings and a Funeral,” feels for the first time that Ted Lasso is falling back on standard sitcom tropes rather than carving out their own.

The episode begins with Rebecca (Hannah Waddingham) and Sam (Toheeb Jimoh) enjoying some adorable pillow talk, but their post-coitus bliss is interrupted by her mother, who comes bearing bad news: Rebecca’s father has died.

The theme of “No Weddings and a Funeral” is grief; how we attempt to process those feelings over time and how they shape and warp our perceptions of those we lost. This applies to both those who are no longer with us and those who are simply no longer in our lives. Rebecca’s grief intersects with Ted’s (Jason Sudeikis), whose memories of his own father’s suicide send him spiraling as he prepares to attend the funeral.

Emotionally, “No Weddings and a Funeral” accomplishes its goal. The episode capably tugs on our heart strings, eliciting sympathy for Rebecca and Ted who are harboring wounds that have calcified over time. Rebecca nurses unresolved grudges regarding her father’s infidelity and her mother’s inability to leave him while Ted is still angry with his father “cause he quit” on his family. Even if Ted’s story has taken somewhat of a backseat over the back half of Season 2, “No Weddings and a Funeral” articulates internal feelings to help us better understand how these characters came to be the way they are. It helps to better define their respective belief systems, such as Rebecca’s fierce independence and Ted’s unceasing empathy. But practically, the episode is dotted with missed opportunities, ill-fitting joke attempts, and a generic pivot that undercuts Ted Lasso‘s greater goals.

In times of grief, unifying behind something seemingly surface oriented, such as Rick Astley’s “Never Gonna Give You Up,” is understandable. But the eulogy was a great moment to more properly externalize the themes and feelings of the moment. While the group singalong provides a statement in its own right—Ted and Rebecca are kindred spirits in a way—this moment opts for the more light-hearted approach. Yet this was the rare opportunity that telling instead of showing could have proven more effective.

What was more egregiously out-of-character, however, was the truly cringe-worthy running gag of Danny’s (Cristo Fernández) foot pain and Jamie’s (Phil Dunster) left-field declaration of love. Ted Lasso may not be a traditional set up-punchline comedy, but it’s always boasted a strong sense of character-specific humor. Yet Danny’s foot pain complaints were an awkward attempt to intersperse the drama with moments of levity that fell completely flat. Each would-be joke pinpricked the balloon of emotionality the episode was inflating. Yet it wasn’t as deflating as his teammate’s actions.

Jamie believes he is becoming the best version of himself and all evidence this season supports that belief (even if we haven’t gotten a much-needed debriefing from his emotionally charged moment in “Man City”). But perhaps true maturity is realizing that there are some people who aren’t meant to be in our lives for long, but still help us become the person we were always meant to be.

If Jamie’s renewed love for Keely (Juno Temple) is merely an over-reaction to his tumultuous personal life, that’s one thing. But the idea of a love triangle between Jamie, Keely, and Roy (Brett Goldstein) is exactly the sort of generic and lifeless sitcom trope that Ted Lasso has proudly avoided thus far. To fall back on a cliche in such an obtuse way at this point would run counter to every storytelling tenet the show has embraced thus far. It’s an artificial manufacturing of drama rather than the free flowing naturalism that has defined Ted Lasso.

“No Weddings and a Funeral” isn’t some flaming misfire that ruins Ted Lasso‘s legacy even if it feels a bit “into touch” with what’s come before. It’s emotional and revealing and a great representation of platonic friendship. But with just two episodes left in Season 2, it’s not an ideal time to stumble as the show sprints towards the goal. 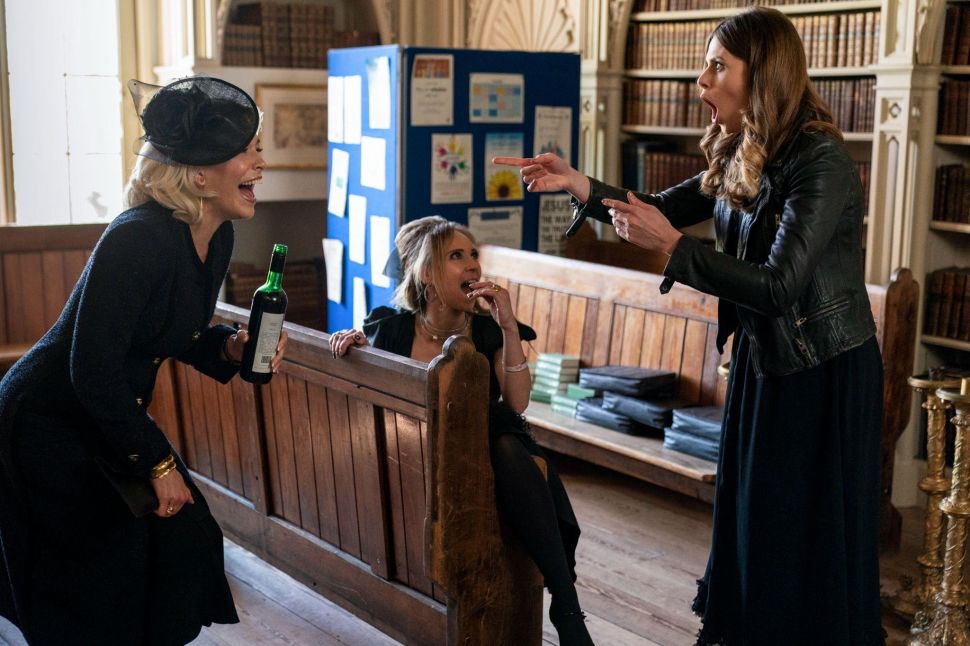