As a former film critic and one of the more engaged minds on the subject of cinema for nearly a half century, Paul Schrader has seen more movies than most of us. But based solely on the films he’s actually made, it’s difficult to believe he has seen more than one: Robert Bresson’s 1959 masterpiece of torment, formalism, and low-stakes crime, Pickpocket.

Schrader has been doing variations on Bresson’s isolated and spiritually adrift cutpurse since the Ford administration, when Martin Scorsese unleashed his unhinged cabbie Travis Bickle with the Schrader-penned Taxi Driver. He’s done the escort version (1980’s American Gigolo), the drug dealer version (1992’s Light Sleeper), and most recently, a version centered on a beleaguered minister appointed to a church in upstate New York (2017’s First Reformed, which perhaps borrowed a bit more from Bresson’s 1951 Diary of a Country Priest).

Both in its themes and style, Schrader’s latest film, The Card Counter, which had its world premiere at the Venice Film Festival on Sept. 2 and opens in theaters Sept. 10, is the most Pickpocket-y of them all, and all the better for it. (The new film even focuses on the characters’ hands, a favorite motif of Bresson.)

Rather than evidence of a filmmaker bereft of new ideas, The Card Counter proves definitively that the alienated-man-with-a-job-in-conflict-with-himself-and-society theme is Schrader’s “A Love Supreme”— a seemingly simple melody that, when played over and over again by the right artists in the right situation, can reach ecclesiastical heights.

As Schrader makes clear with the film’s first line of dialogue (“I never imagined myself confined to a life of incarceration”), this is a movie about prisons.

The story centers on William Tell (an astounding Oscar Isaac), an enigma of a man plagued by his past as a torturer in the U.S.-sanctioned “enhanced interrogation” program that took place at the Abu Ghraib prison complex after the 2003 invasion of Iraq. Unlike his direct supervisor, a civilian military contractor named Major John Gordo (Schrader favorite Willem Dafoe)— or for that matter anyone from Don Rumsfeld’s Defense Department— he was held accountable for his actions, spending an 8-and-half year stint in the United States Disciplinary Barracks in Fort Leavenworth, Kansas, where he trained himself to become a master handler and counter of playing cards.

Now Tell leads a lonely existence, haunting different sorts of prisons—the many soulless casinos that have bloomed like ragweed along the East Coast over the last few decades—passing time and earning a modest living playing low-stakes blackjack and poker. Because of his aversion to both noise and surveillance, he stays far from the casinos in cheap motels, where for reasons perhaps relating to his trauma, he covers every inch of his room in white sheets.

In fine Bressonian tradition, Tell’s purgatory-like existence is upended by the chance of human connection.

He is approached by and sparks to La Linda (a curiously cast Tiffany Haddish), who runs a stable of high skill poker players backed by big money corporate interests to compete in high-stakes tournaments like the World Series of Poker. He also meets and takes under his wing Cirk (Tye Sheridan), a twenty-something slacker who has a half-baked plan to torture and murder Major Gordo in retaliation for the death of his father, who, like Tell, was a torturer at Abu Ghraib and later killed himself under the weight of his guilt.

It is hard to imagine that a film that only has four major characters—where three of the actors feel underutilized—can be as successful as The Card Counter. This can be attributed partly to Schrader’s rigor as a filmmaker, but mainly to the absolute clinic held by Oscar Isaac, an actor operating at the peak of his abilities at the same time that he is at the height of his popularity. His stillness is so packed with meaning that when he does crack a smile or lift an eyebrow, it nearly crumbles you with its intensity.

But there is such depth to his cinematic and intellectual rigor, such fundamental value to the red-hot anger that burns beneath the film’s cool surface, that forgiving its flaws is both necessary and rewarding. It helps that this lean, skin-and-bones production, executive produced by Schrader’s longtime cinematic comrade Scorsese, is backed by such strong production elements. Chief among them is the breath-and-guitar score composed by Robert Levon Been, lead singer and songwriter for the Black Rebel Motorcycle Club.

In an appreciation of his late friend and mentor Pauline Kael after her death twenty years ago this month, Schrader lamented that the legendary New Yorker critic and her minions had been so successful in finding fault with established art house cinema that the trash culture they exalted in its place had become the only movie culture to exist.

“She and her foot soldiers won the battle but lost the war,” he wrote. “It was fun watching the applecart being upset, but now where do we go for apples?”

The Card Counter is Schrader’s feverishly exacting and profoundly relevant exercise in re-stacking apples. Here he uses the rigor of cinema at its most sparse and unsparing to force us to confront our own complicity in the moral collapse of our nation. It’s not for everybody, and it’s far from perfect, but you’ll be hard-pressed to find a more thrillingly necessary use of the filmmaking form this year. 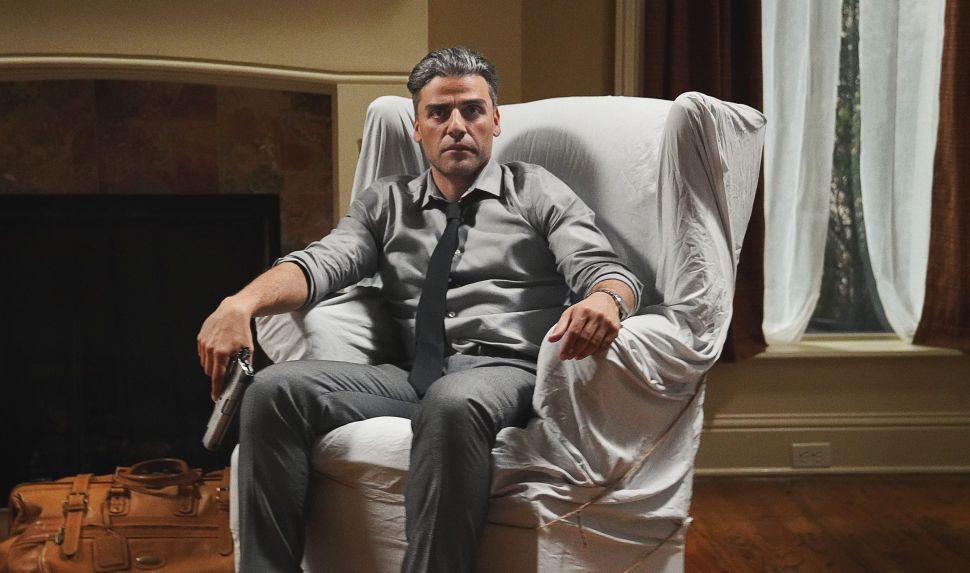