Documentary realism rarely goes hand-in-hand with animated un-reality, but in Jonas Poher Rasmussen’s Flee, those two aesthetic worlds collide and create a feeling of being unmoored. The film follows Rasmussen’s long-time friend Amin Nawabi—a pseudonym to protect his identity—via interviews about his secretive escape from war-torn Kabul in the 1980s, his perilous refugee journey through several countries, and his life as a gay Muslim man who, one way or another, has to hide some part of himself. In a mere 90 minutes, the film plunges the audience into the depths of refugee trauma and the systems set in place to strip people of their dignity, but it also builds to moments of stunning euphoria, and to a moving, deeply considered understanding of the way Nawabi has had to compartmentalize his soul.

The film occasionally follows Nawabi during his daily routine, but for most of the interview segments, he lies supine, with the camera suspended above him, as if it were documenting a closed session of long-overdue therapy. These interviews are animated—rotoscoped, in fact—so as to hide Nawabi’s face, but even the most insignificant of noises are turned up in the sound mix, like Nawabi’s tense breath, and the way he shifts into position when he lays down to speak. His concealed reality frequently pierces the animated veil. Art director Jess Nicholls re-creates his subtle glances off-camera, as his doubts about revealing himself and his painful story come to the fore. Eventually, he makes stunning confessions to his friend Rasmussen, about his family and their whereabouts, which he has revealed to no one—not even his long-term boyfriend—for the nearly two decades he’s lived in Denmark.

The frame stands completely still when it captures Nawabi’s hesitance, but when he begins telling his story, it zips through time and space. Archival live-action footage establishes the broader political backdrop, while Nawabi’s intimate flashbacks transform in animation style. They capture his youthful zeal as a bit of an oddball child, with sweet crushes on Hollywood and Bollywood leading men, and a soundtrack of European and American pop music blasting from his pink headphones as he frolics through the streets. These flashbacks also capture the vague shapes of crumbling buildings and empty, transparent silhouettes of Afghan bystanders fleeing the US-USSR conflict. Nawabi’s memories of childhood happiness with his mother and his many siblings feel warm, and whole, but his memories of the war start out as suppressed. They lack finer details. These are eventually filled in the more he opens up—to the camera, and to himself.

His journey takes years, and it breaks up his family bit by bit, as they’re forced to navigate cruel and expensive traffickers and corrupt local authorities in several countries, who are hell-bent on using ghoulish immigration laws against them. Some of this quiet barbarism is downright nauseating, not because physical cruelty is overtly depicted, but because of how the film captures and magnifies its depressing impact, turning people, once again, into shaded sketches, where their humanity becomes lost. At their most monstrous, these events—as recalled by Nawabi—even lead to the animation becoming disintegrated and abstract as he migrates from region to region, as if he were unable to find any semblance of belonging, or permanence, or solid ground.

The effects of Nawabi’s trauma linger in the present. His decisions are often clinical and career-focused, born of a personal resolve to live up to his family’s sacrifices, and born of a gnawing survivor’s guilt that prevents him from pursuing happiness. He also opens each new chapter of his story with a fearful quiver in his voice. His stress doesn’t seem to subside no matter how close he is to Rasmussen, because of the way his story and legal status have been used against him in the past. In the present, he remains closed off from the world as a means to survive.

The original score, by Uno Helmersson, matches Nawabi’s most hopeless recollections through heavy strings that sink into the pit of your stomach. The film’s most memorable musical moment, however, arrives during a particularly pulse-pounding scene set to Daft Punk’s “Veridis Quo,” where the tension of Nawabi revealing a secret part of himself gives way to an unexpected display of acceptance. The electronic duo’s music usually has a rapid-fire pace, but the use of one of their more measured and reflective tracks perfectly matches Nawabi’s hesitance. They both eventually push forward despite their restraint, building to a moment of liberation that, while fleeting, feels emotionally exhilarating. The film’s visual and aural fabric, after embodying so much anguish and indignity, radiates an overwhelming warmth and tenderness—a uniquely moving catharsis.

An unfortunately timely film, Flee uses animation primarily to sharpen the dangerous edges of its refugee story, and to capture the devastating physical and emotional toll of never-ending war. But in brief moments, the film acts as a spiritual balm, offering hints and possibilities of a world where Nawabi might one day be able to fully share himself with other people. Where he might one day feel whole.

This review has been updated to highlight the selection of Daft Punk’s “Veridis Quo.” 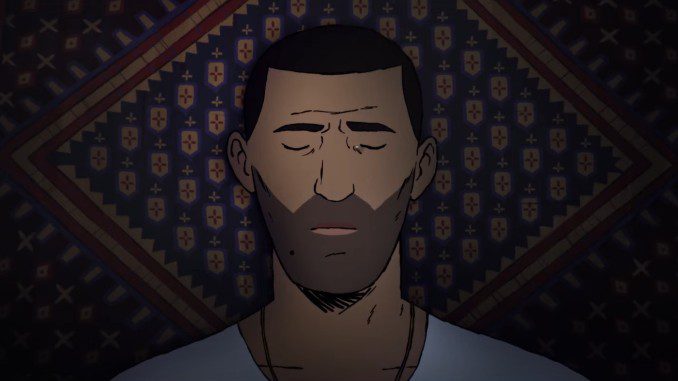