A story of dueling inner monologues, Justine Bateman’s directorial debut follows Violet (Olivia Munn), an anxious, low-self-esteem L.A. film executive who seems put together on the surface. Though as the film quickly reveals, she’s held back by a condescending voice in her head (Justin Theroux), which clashes wildly with her desires to progress and break free; these take the form of hand-scribbled notes on screen, like peeks into her personal diary. Violet’s editing and texture effectively convey what the character is feeling, and while its noncommittal camera choices occasionally prevent the viewer from feeling it alongside her, Munn’s performance, and the film’s eventual narrative trajectory, are incisive enough to get around its visual shortcomings.

The audience is yanked into Violet’s story by an explosion of strange, disconcerting images, from rot to destruction to dismemberment, all set to jagged, discordant sounds. This grotesquerie is the lay of the land, and the terrain is Violet’s disturbed psyche. Throughout the film, as unpleasant thoughts are about to invade her conversations, flashes from this montage briefly consume her line of sight, like subliminal reminders of an impending lonely demise. Sometimes they appear during emotionally charged interactions; other times, they show up for no reason at all; you never can tell when your worst impulses are going to grab a hold of you.

During the film, Violet is temporarily staying with her screenwriter friend, Red (Luke Bracey), a charming, confident presence around whom her macabre visions don’t feel as frequent or as invasive. When both characters are first introduced, Bateman and cinematographer Mark Williams capture them on an enormously long lens that blurs anyone and anything that isn’t at their very specific focal length; the result is the rest of the world fading away around them, and the two of them feeling entirely in sync. Their friendship is supposedly platonic, though something deeper is clearly brewing — however, Violet’s most self-sabotaging instincts keep her at arm’s length from the people she needs the most.

Beyond this razor-sharp use of focus early on, the film rarely employs framing or blocking to great effect. For the most part, the frame is static, and the camera hangs back in languid medium shots, allowing Theroux’s deprecating voiceover and the desperate on-screen calligraphy to do most of the talking, as a sort of warring back-and-forth between her subconscious and conscious selves. “You’re fat” says the voice; “Is there something wrong with me?” asks the handwriting.

At the production company where Violet works, she often stops herself from putting her foot down. Which is to say, the voice in her head — which she calls “the committee” — often tells her to stop, out of some roundabout self-preservation instinct. This results in her superiors, her peers and even her subordinates walking all over her, whenever she tries to bring more abstract and emotionally meaningful work to fruition (at least part of her instability is owed to the crushing weight of the Hollywood machine). The story follows her from meetings, to casual interactions, to encounters with people from her past, and it paints a distinct picture of the way she navigates the world. The film’s overt formal flourishes allow Munn to deliver a performance that’s understated and concealed, since her focus is less on drawing the audience into her orbit, and more on keeping people at bay without crumbling to dust at the slightest touch. Her fragility is fascinating to observe. However, for nearly its first hour (out of a mere 92 minutes), the film rarely moves deeper beyond this observational quality.

Violet’s building frustrations pierce the film’s fabric in the form of a bright red wash, which builds until the whole frame is obscured. The message is clear — Violet is seeing red! — but this technique also serves to obscure Munn’s tremendous work during key subtle moments, and it creates more distance between the film and its audience. The frame may be red, but the film itself never feels angry or volatile, since the camera rarely moves, and rarely captures anger up close. The only precise editing decisions appear to be the sudden inserts of stark and violent imagery.

Even when the film comes close to luring the viewer into what Violet is feeling — for instance, her unique moments of joyful calm — it doesn’t hold on those emotions long enough. These scenes often end far too quickly, cutting away to something else rather than luxuriating in their genuine emotional potency. Perhaps this hurriedness to move onto the next plot point is meant to match Violet’s own fears of feeling something real, but it has a compounding effect, wherein few beats actually land the way they should within the first 60 or so minutes.

However, the film’s final third gathers momentum and sprints toward uneasy catharsis, when Violet finally starts to break out of her emotional rut. The stage is set by numerous flashbacks of abusive romantic and familial relationships — and one specific memory from her childhood, during which she felt truly free — and these images are sometimes projected onto the space around her. Violet begins to slowly but surely change her behavior; it’s a difficult journey, owing to how deeply pessimistic her expectations are, but it leads to an engrossing overlap and tension between the film’s three key narrative elements: the voice in her ear, whose words mirror deep-cutting criticisms from her past, her hand-written wishes across the screen, which oscillate between desperate pleas and poems about her feelings, and the dialogue, which signals which of these two impulses she chooses and projects out into the world.

It’s unfortunate that the film’s fourth major element — the way the world around Violet actually looks and feels — is practically moot, thanks to the relative lack of meaningful visual choices beyond the handwritten notes. However, Violet’s gradual pushback against the uncouth men in her field, the callous men and women in her life, and ultimately, the voice in her head, allows Munn to craft an enticing and emotionally delicate performance, as Violet wrestles between fearful instincts of professional self-preservation, and a pursuit of emotional honesty — both professionally and personally — in the hopes of a lasting sense of agency. 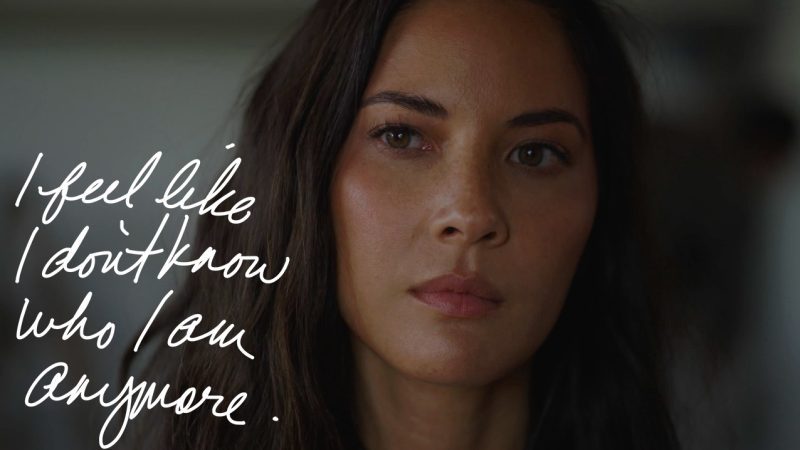