Julia Ducournau’s Titane drips with blood and brake fluid, and mixes milk with motor oil. It centers, in its exacting crosshairs, the fragility of the flesh, the performance of gender, and palpable bodily anxieties, all while telling a bizarre story about a woman who fucks—and is impregnated by—a vintage Cadillac, before going on a murder spree and impersonating the long-lost son of a steroid-loving fire chief. Ducournau and cinematographer Ruben Impens capture all of this with a suitably madcap verve, painting gory violence with tongue-in-cheek whimsy, while zeroing in on the emotional core of operatic moments with laser precision. The result is a wildly visceral experience about transformation, one that lingers beneath the skin.

As a child, young Alexia (Adèle Guigue) has a fixation with cars. When her loud impression of an engine distracts her short-tempered father, she causes a road accident, resulting in a large chunk of her skull being replaced with titanium. Fast forward several years, and the adult Alexia (Agathe Rousselle) has become a famous dancer, whose provocative routine involves straddling the hood of a flaming Cadillac. Even before plunging its way into mind-boggling oddities, the film weaves together two male fetish objects—the car and the feminine form—but after briefly impersonating the male gaze, the camera swiftly ejects it from its purview, as Alexia respond to unwanted sexual advances with stark, discomforting violence.

The violence in Titane is specifically penetrative, with hair sticks and chair legs thrust into ears and mouths. While this both subverts and strongly resembles sexual violence, Alexia’s bodily proximity to motor vehicles ensures that it also calls to mind car keys being twisted in ignitions. After all, one of these violent reprisals leads to her being revved up enough to have sex inside—and with—her vintage car, as it bounces up and down. The anatomical specifics are left out of frame; they don’t matter nearly as much as the glowing image of Alexia’s dripping sweat, or the velvet ropes she grasps, or the scene’s phantasmagorical ecstasy.

This is merely the beginning of the film’s physical, psychological and aesthetic overlap between (wo)man and machine. Alexia’s transhumanistic voyage was quite literally planted in her head in a moment of adolescent trauma, and it now resurges at a catalytic intersection of sex and violence. Her body keeps score during her unexpected pregnancy, during which she bleeds not blood, but a black, motor grease-like substance, and during which her womb becomes laced with metal, inviting questions of what parts of herself she might end up passing down to her child.

Alexia’s pregnancy anxiety also coincides with her evading the law by changing her appearance, in ways both as simple as shaving her eyebrows, and as complicated as breaking and misshaping her nose. She soon takes up residence with a lonely firefighter, Vincent (Vincent Lindon), a sad-clown patriarch past his prime, who pumps iron, and whose stoic rejection of grief primes him to accept, and believe, that Alexia is his long-lost son Adrien. Now living as a twenty-something man, Alexia binds her breasts and her pregnant belly, leading to winding scars akin to an ornate car decal, and to an uneasy balancing act. Not only must she put on a masculine performance—after years of performing her femininity for male eyes—but she must also work at a fire station drenched in homophobia and testosterone, while living with a new father figure whose love is both constrained and overbearing, and who eschews emotional expression in favour of physical dominance.

Alexia’s new predicament turns Titane into a transgender parable, not only because of the literal presence of binding and her need to “pass” as a man (which is directly threatened by her pregnancy), but because of how the film’s more inexplicable bodily anxieties are expressed. The specter of Alexia’s bodily mechanization causes her a dysphoric imbalance. It looms over her in a manner that prevents her from feeling wholly masculine or wholly feminine, two warring, binary modes of physical expression to which she is ultimately drawn, and which coalesce inside her in shocking and confusing ways, as the film blurs the lines between our gendered social understanding of pregnancy and technology—of feminine flesh and masculine metal.

This complicated dichotomy arises as early as Titane’s introductory scenes. High-contrast closeups of car parts dripping motor fluid are color timed to resemble festering wounds—these are also placed in close proximity to similar shots of Alexia on the operating table, with blood dripping from her new titanium skull. The film frequently invites aesthetic comparisons between the circulatory systems of human bodies and motorized creations; as Alexia’s story wears on, this visual overlap becomes more pronounced, especially as Ducournau slowly but surely maps it onto more specific car parts, and more specific body parts as well.

The film’s approach to gender and transformation bears resemblance to Isabel Fall’s unfairly maligned “I Sexually Identify as an Attack Helicopter,” a piercing sci-fi short story that explores transgender anxieties through a similar lens. The two texts were likely created independently of one another (the short story has been unavailable for some time), but they make for a fascinating pairing. Each one powerfully unsettles its audience, not only by placing gender’s social function under a microscope in a charged and violent setting, but by using vehicular bodies to magnify gender’s fragile and fluid relationship to the tangible and the physical.

This relationship is often expressed through motion—a fitting extension of the film’s vehicular themes—whether through Alexia’s hasty scrambles to cover up her body and her wounds, or through the contrast between her constrained stillness as the stone-faced Adrien and her eventual return to provocative dance movements to re-assert and re-ignite her femininity. She isn’t the only character to be framed this way; several young firemen are caught in a similar bodily battle. Pulsating musical frolic during nighttime celebrations offers them honest (if momentary) liberation, which clashes with their daytime routines involving their centered, masculine facades. Perhaps most moving of all is the way Vincent fits this mold, as a man torn between his steroid-fueled workouts—which he uses to suppress his emotions and reinforce his denial—and his submission to rhythmic intoxication, his soul set ablaze by a wash of neon light. It may not be long before Titane is programmed as a double feature alongside Beau Travail.

Throughout these physical and emotional transformations, Agathe Rousselle and Vincent Lindon throw themselves into their parts with full force. However, to discuss each role separately would be a purely logistical examination of an emotional whole, of which they form to two inextricable halves. As Alexia/Adrien and Fire Captain Vincent, they portray a remarkable balance between nigh-impenetrable emotional exteriors, and fleeting glimmers of vulnerable longing, for someone who truly understands them—their bodies, and their souls—a desire which Ducournau punctuates in the form of gorgeously detailed character portraits, often filmed in slow motion, amidst a sea of frenzy in an otherwise crowded frame.

Alexia and Vincent’s dynamic isn’t quite as simple as a man and a woman who gradually meet in the middle of a spectrum, but their respective self-actualizations are dependent on one another in unexpected ways. This paves the path for a relationship that starts out absurd, walks a fine line between surreal and familiar—including one particularly side-splitting use of “Macarena”—but soon gives way to complex intimacy, to surprising gentleness, and ultimately, to a stunning emotional crescendo that brings each of the film’s lofty themes full circle.

Strange, frequently haunting, occasionally hilarious and ultimately masterful, Titane is a journey whose head-spinning complications are a vital part of its emotional impact. Wrapping one’s mind around its outlandish elements demands actively re-calibrating cinematic expectations—and in the process, opening the mind and body to more introspective responses to the film’s most visceral, most nauseating and most thrilling scenes. 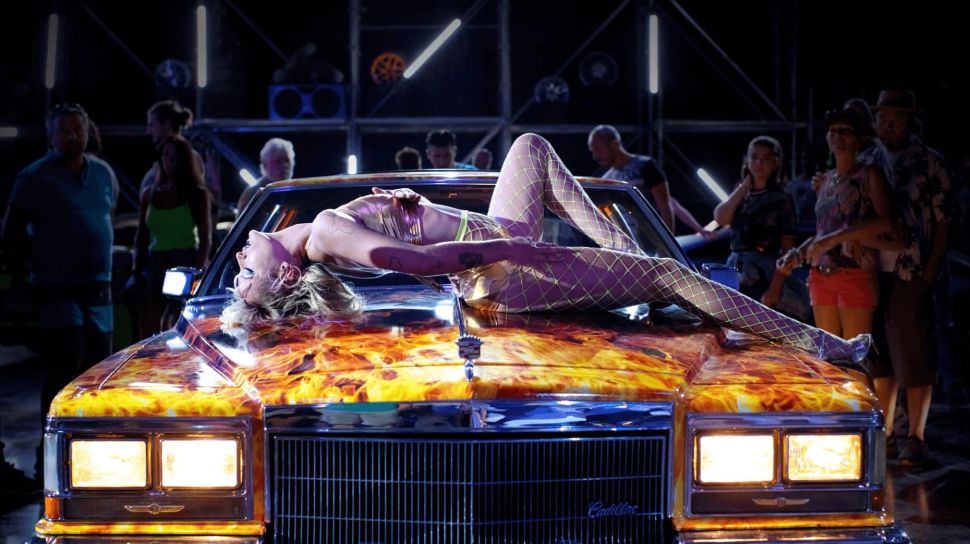