The utopia of intersectional feminism promised a world beyond pussy hats. Instead they still dominate our imagination full of girlbosses, gatekeepers, and gaslighters. What is feminism up to these days? A variety of new books attempt to answer this question. In one corner, a few milquetoast books by white women on freedom have sprung up. It remains to be seen what these books are adding to our discourse. In another corner, as Parul Sehgal has noted, is an explosion of books on desire and consent in response to #MeToo, Brock Turner, and a world reckoning with sexual violence.

One of the best books to contend with the politics of desire is Amia Srinivasan’s The Right to Sex. The essays in Srinivasan’s new book balances historical analysis with a deep sense of how feminist philosophy functions in online and academic discourse, how it travels through whisper networks, and how it uneasily joins and diverges from other anticapitalist struggles. She can levy an acidic “perhaps” to send shivers down the spine of an argument she is about to perform decisive surgery on. “I wanted to tell him that there is no civilization under patriarchy,” she writes knowing the weight of casual conversation with men.

Srinivasan notes that her students are wary against the criminalization of both porn and sex work, knowing who it ultimately harms. Yet Srinivasan treats sex workers with cautious ambiguity, citing many while also citing their detractors. Ultimately, Srinivasan believes that sex workers’ rights are more important than “political symbolism.” There’s something brewing under the surface though. Srinivasan writes “As anti-prostitution feminists might see it, though, decriminalization is at best a reformist measure, which marginally improves the lives of sex workers while shoring up both patriarchy and the neoliberal commodification of sex. Who is right? To be honest, it’s hard to know.”

Consent features heavily in these essays. Is it a tool of capitalism? Here Srinivasan explores tricky territory, how Title IX serves to protect colleges and not students, how professors use ‘consent’ as a smokescreen to have relationships with their students, and how consent can cover for problematic sex. Language slips here, as ‘problematic sex’ comes to stand in for sex that blurs the line between rape, consent, and self-knowledge. Instead, Srinivasan asks, “How do we formulate a regulation that prohibits the sort of sex that is produced by patriarchy? Could the reason that this question is so hard to answer be that the law is simply the wrong tool for the job?”

Another recent book on consent, Katherine Angel’s Tomorrow Sex Will Be Good Again, also acknowledges the problem with confidence culture and consent, a sex positivity that glosses over the messiness of desire. “Here, women’s speech bears a heavy burden: that of ensuring pleasure; of improving sexual relations, and of resolving violence,” Angel tells us consent is a heavy burden that taxes women with its weight. Srinivasan makes a similar argument: “Sex is no longer morally problematic or unproblematic: it is instead merely wanted or unwanted. In this sense, the norms of sex are like the norms of capitalist free exchange. What matters is not what conditions give rise to the dynamics of supply and demand…” On the other hand, Angel argues, good sex is linked to vulnerability: “When I invite someone in – when I want them to enter – I can never be sure that they will enter in the way that I want them to.” Good sex is a life’s work.

In the title essay of The Right to Sex, Srinivasan interrogates the politics of desirability. Can we want to fuck who we are supposed to? Srinivasan digs into Andrea Long Chu’s ever present essay, “On Liking Women” to explore the difference between desire and political desire. Can we change what we want to be more aligned with our values? Chu claims we cannot. To claim otherwise is moral puritanism. “Desire can take us by surprise,” Srinivasan says. “There is a kind of discipline here, in that it requires us to quiet the voices that have spoken to us since birth, the voices that tell us which bodies and ways of being in the world are worthy and which are unworthy.” She recounts a letter she received from a gay man who worked on desiring his fat husband, “Is this an act of discipline, or of love?”

Still it seems an oversimplification to ask questions such as: “Does ethics never belong in the bedroom?” This reads as a bad faith response to Chu’s essay. There seems to be room for scratching at the wound of desire. Chu’s claim can be summed up in her own words: “Try to imagine life as a feminist anemone, the tendrils of your desire withdrawing in an instant from patriarchy’s every touch. There would be nothing to watch on TV.” The bridge between these two ideas is not quite built. Still, the essay is fascinating in weaving together the politicization of desire, something often written about in hues of simplistic self-love.

It is interesting to note the obsession of modern feminist theory with trans women and sex workers. Neither are ever far from a feminist’s mind, either as sources of scorn or as ‘problematics’ to be dealt with, accounted for, or figured out ontologically. Srinivasan has written about the history of pronouns, “Ethics requires that we embrace a practice of naming that makes people’s passage through the world more bearable.” In the essay, Srinivasan acknowledges not loving the pronoun “she.” Jacquline Rose’s essay “Who do you think you are?” does similar work, again trying to do the work of accounting for trans women in cis feminist discourse without replicating transphobic rhetoric. While I’m not arguing only trans writers can or should write about trans theory, the lack of trans writers hired to do this work for literary publications is notable.

The Right to Sex is a fascinating and exciting work that contends with a full spectrum of ideas, even when gaps begin to show. In one essay, Srinivasan quotes a professor that there will “still be heartbreak in utopia.” This is the kind of nuance and fraught response this book can bring to feminist philosophy. 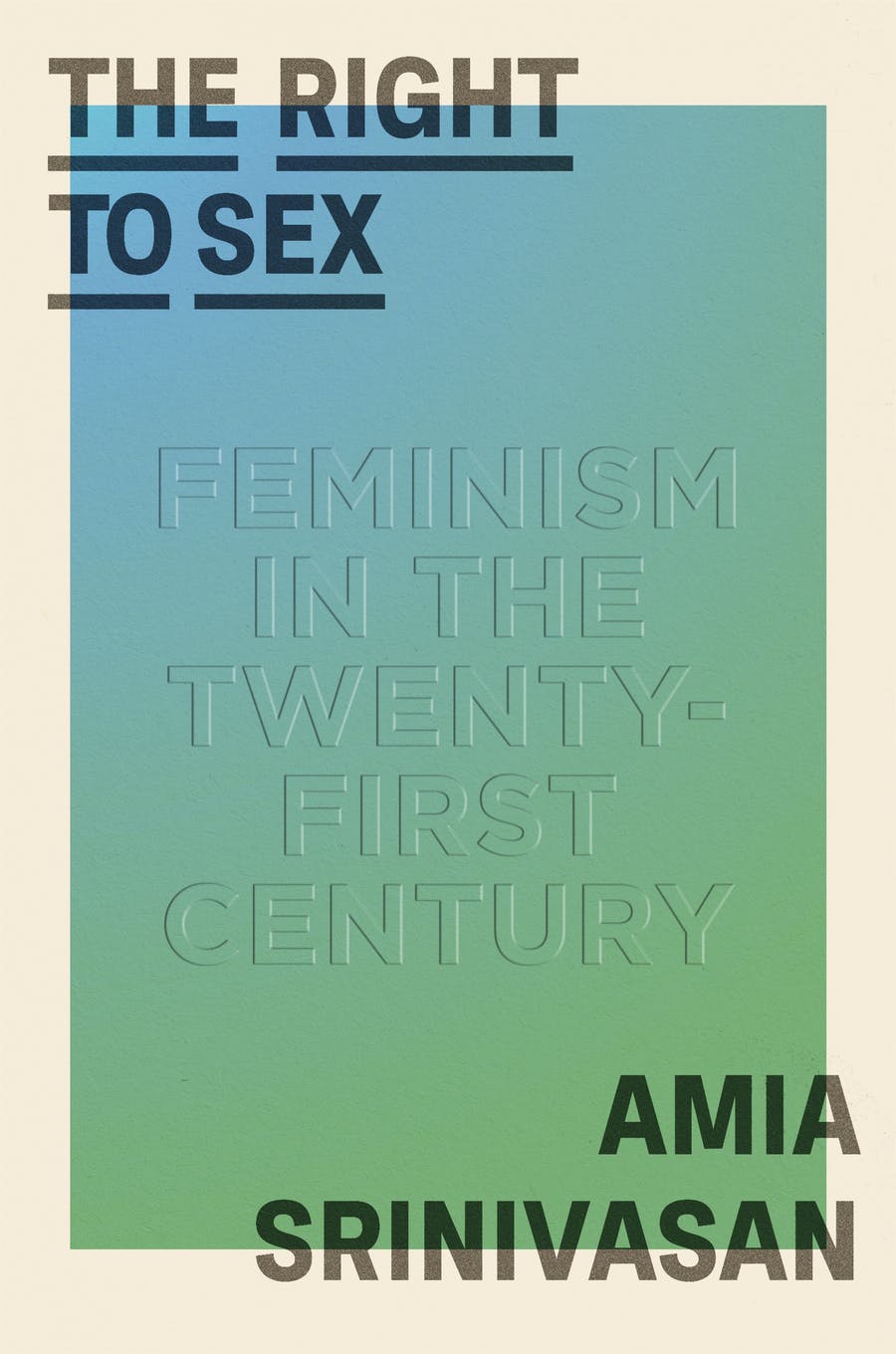