With nearly half of American adults still not fully vaccinated against COVID-19, the CDC (Centers for Disease Control and Prevention) is experimenting with harnessing the power of art to drive the inoculation campaign. The government agency has created guides for state and local health departments to forge partnerships with artists and culture bearers in a bid to inspire more people to get jabbed. The proposal builds on numerous cultural initiatives already in place hoping to combat vaccine hesitancy in the States.

In March, non-profit design lab Amplifier, which produces art and media projects to “amplify” important socio-political movements, began a project to commission posters from a variety of artists on the theme of vaccinations. The #Vaccinated artwork campaign offered $100,000 in awards to artists whose submissions were selected. Creatives were asked to design works on topics including “The sooner we all get vaccinated the sooner we can (fill in the blank),” “No one is safe until we are all safe” and “Vaccines for victory.” Hospitals, public health institutions and the general public have been encouraged to download and share the posters both online and physically to “help distribute these messages where they are needed the most.” The artworks can be downloaded for free in high resolution from the Amplifier website. The site also features some images of the posters in-situ, such as projected onto buildings, displayed at bus stops and worn as badges.

As the non-profit organization writes on their submission page, “These symbols will stand long after the virus is gone as a testament to our resilience. Please join us in this historic moment by submitting!” It is reminiscent of poster campaigns from WWII that remain iconic today such as Lord Kitchener’s “Your country needs you” image or Rosie the Riveter in the “We Can Do It!” poster to bolster the morale of female workers. In fact, Damien Cifelli’s “Roll Up Your Sleeves” posters for Amplifier’s campaign were inspired by the “We Can Do It!” image. His three posters present “diverse figures” in poses recalling that of Rosie the Riveter and were executed in oil to “add gravity” to the message. “The phrase ‘Roll Up your Sleeves’ suggests a collective spirit in which we all work together to eradicate the virus,” Cifelli adds in the poster description.

Maddy Brookes’ “Let’s Do It” is an even more direct reference to Rosie the Riveter, using the same style and layout. Brookes used a black woman in her poster, which was “aimed at POC who are historically less inclined to get vaccinated and to show that the vaccine is safe for all races and ethnicities.” Indeed, the CDC’s call for health departments to work with artists also makes reference to “culture bearers” — trusted people in a community such as faith leaders, librarians and teachers. A collaboration with such figures hopes to resonate with demographics that may have experienced historical or continuing injustices in the name of science leading to wavering trust in health services and government messaging. These demographics, including black and native Americans, have proved to be among the most vulnerable to the virus. However, they are also some of the most hesitant about the vaccine.

Several of Amplifier’s selected submissions are aimed directly at these communities, like that of Brookes or Salomée Souag’s “Power To All People Not The Few” poster in bold pink and red with stylized black figures reminiscent of Greek vases. “In the world of science, Black and brown bodies are usually not included in studies therefore a lot of BIPOC individuals are afraid to get vaccines,” reads Souag’s description. “This is a design to make them feel empowered by it.”

To inspire future collaborations between health departments and artists, the CDC has provided a database of previous vaccine art campaigns like that of Amplifier. The “Vaccine Confidence Arts Response Repository” developed by the University of Florida’s Center for Arts in Medicine collates a variety of artistic and cultural approaches from music to dance to serve as models. For example, the City of Chicago has commissioned works from artists to go up on billboards and across social media. In collaboration with the Design Museum of Chicago, the council commissioned local artists to “create original designs depicting health, vitality, community and vaccine distribution” to encourage people to get vaccinated. The resulting works included paintings, graphics and even cross-stitch.

New Orleans, instead, created the “Sleeves Up, NOLA” campaign video that uses Mardi Gras carnival culture to connect with its residents. In the 30 second clip, local celebrities dressed in extravagant feathered festival outfits perform dance moves while explaining their reasons for getting the shot. The scene takes place beneath the Claiborne Avenue overpass, traditionally used as a festival meet-up spot. The setting, outfits and sound of snare drums are a poignant reminder that the carnival so treasured in local culture had to be canceled earlier this year. The video deliberately frames getting jabbed as a community effort and a collective stand against the virus that will help residents celebrate once more such a significant part of their culture.

Latino cartoonist and two-time Pulitzer editorial cartoon finalist Lalo Alcaraz has created comic cartoons for the Covid Latino project. Using culturally relevant references, Alcaraz’s cartoons hope to spread information about coronavirus inoculations and the importance of testing to Latino communities. One image, for example, shows a Latino farmworker first with and then without the jab. In the former, he carries a box of cabbages while in the latter the box is filled with the virus.

With hospitalizations and death rates spiking again, partly due to the highly contagious Delta variant, it is now crucial that Americans get their double doses. Will art’s communicative powers be what’s needed to build confidence, combat the spread of disinformation and boost the country’s vaccine campaign? 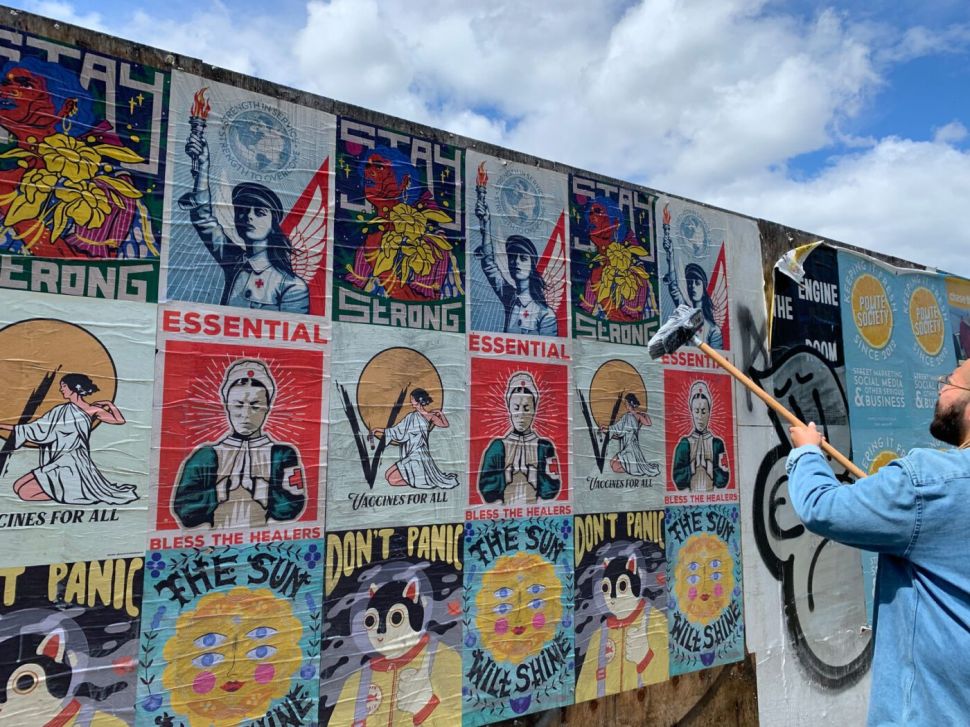