On September 2, General Mark A. Milley, chairman of the Joint Chiefs of Staff, told journalists that the United States is considering coordinating with the Taliban in order to combat the Islamic State, which last week was responsible for a suicide bombing that claimed the lives of nearly 200 Afghan civilians and 13 American troops. “We don’t know what the future of the Taliban is, but I can tell you from personal experience that this is a ruthless group from the past, and whether or not they change remains to be seen,” Milley, said. “In war, you do what you must — not what you necessarily want to do.”

In the wake of the Taliban’s rapid and totalizing takeover of Afghanistan, in addition to innumerable uncertainties about the safety of the Afghan people, grave concerns have also been raised regarding the ongoing survival of the country’s cultural heritage. Reports from ABC News state that looting has taken place at the Afghan National Archives’ administrative building and that Taliban fighters have already blown up a statue of Abdul Ali Mazari, a Shiite militia leader who fought against the Taliban and was killed by the organization in 1995.

Two decades ago, the last time Kabul was controlled by the extremist group, estimations found that Afghanistan ultimately lost around half of its cultural heritage. A particularly disturbing incident saw the Taliban destroying two enormous, 1,500-year-old Buddha statues in Bamiyan in March of 2001.

Milley’s intimations that the United States may soon collaborate with the Taliban out of necessity mirror statements made on behalf of the Alliance for the Restoration of Cultural Heritage, a Washington, D.C.-based nonprofit organization that’s facilitated funding in the past for at least one prominent renovation project. In 2019, the organization oversaw the United States’ contribution of $500,000 towards the restoration of a tomb in Alqosh, a town in northern Iraq, that’s believed to contain the remains of the prophet Nahum.

On August 19, I wrote and published an article about Kabul’s National Museum of Afghanistan expressing concern for the institution’s future amidst the Taliban-prompted upheaval: “the museum staff, artifacts, and goods are safe yet, but continuation of this chaotic situation causes a huge concern about the safety of museum’s artifacts and goods,” the museum said in a press release published on Facebook.

Days later, I received a Twitter DM from an account attached to the Alliance for the Restoration of Cultural Heritage. “Dear Ms. Holmes, you recently quoted the director of Kabul Museum as being extremely worried about the museum,” the message read. “We wanted to send you an update: as of yesterday, through our channels we managed to post guards around the museum, provided by the Taliban.”

I was connected with Dr. Cheryl Benard, whom the Alliance identified as their President and co-founder. “We have been in communication about cultural heritage protection with Taliban counterparts since the end of 2020, and they have stated that they agree with the need to protect historic sites,” Benard wrote to Observer.

“Thus when the Director of Kabul Museum told us about his fears, we reached out to them and they posted four guards, connected him with the nearby Taliban security station/police station and the now-Minister of Culture Mr. Mudshahed [Deputy Culture and Information Minister Zabihullah Mujahid] personally went to the museum to assure the Director that they would look after its safety.”

When I responded, asking if, given the fact that since the Taliban has destroyed cultural artifacts in Afghanistan in the past, there was any institutional concern at the Kabul museum that this pattern could potentially repeat itself, Benard directed me to an order issued by the Islamic Emirate in February discouraging the sale or excavation of historic artifacts.

On August 20, Benard popped up in a New York Times article urging concerned parties to exercise caution before jumping to conclusions about the Taliban, whom she said were likely to understand the importance of preserving Afghanistan’s cultural artifacts. “Everybody is in a wait and see mode,” Benard said to the Times. “The biggest danger is that some renegade individual goes on a binge of destruction, but they seem astonishingly disciplined so far.”

“I have reached out to everyone I know on the ground in Mazar, Herat, and Kabul, and there is no proof or even a strong rumor of any deliberate or non-deliberate damage by the Taliban of anything related to cultural heritage,” Benard said to Artnet.

“If [the Taliban] have bad intentions,“ Benard added to National Geographic, “it will become obvious down the road.”

Thus, it’s clear that America’s official stance on potentially collaborating with the Taliban militaristically has been accidentally anticipated by what seems to be the Alliance for the Restoration of Cultural Heritage’s strategy: trust the Taliban to safeguard artifacts, not destroy them.

Benard’s husband is Dr. Zalmay Khalilzad, who served as the United States Ambassador to Iraq under George W. Bush. Later, the Trump administration tapped Kalizad in 2018 to oversee negotiations between the United States and the Taliban. According to Al Jazeera, he was instrumental in securing the release of Taliban’s co-founder Mullah Abdul Ghani Baradar, and negotiated the U.S. withdrawal agreement that was signed in February of 2020. A career diplomat, Khalilzad also operates a consultancy that “assists clients in assessing situations, resolving issues, dealing with problems, and implementing practical solutions in some of the world’s most exciting and challenging locales.”

Given that the Taliban is, to put it mildly, unpopular on a grand scale, the organization has been attempting to fight the perception that its members are violent extremists hell-bent on annihilating centuries-old artifacts with a full-throated PR offensive assuring citizens of Kabul’s safety and security.

Asked whether Taliban guards could indeed have been posted at the Kabul Museum, Gil Stein, an archaeology professor at the University of Chicago, told Observer it was possible. “It would be a logical thing to do, given the looting that had taken place at the Museum during the Afghan civil war from 1989-1996 after the Soviet withdrawal from Afghanistan,” Stein wrote.

“At that time, the Museum was looted, rocketed and burned, and lost an estimated 70% of its holdings,” Stein continued. “Knowing that history, combined with the Taliban’s need to impose law and order in Kabul while also showing respect for cultural heritage as a matter of public relations, posting guards would be reasonable precaution for them to take.” 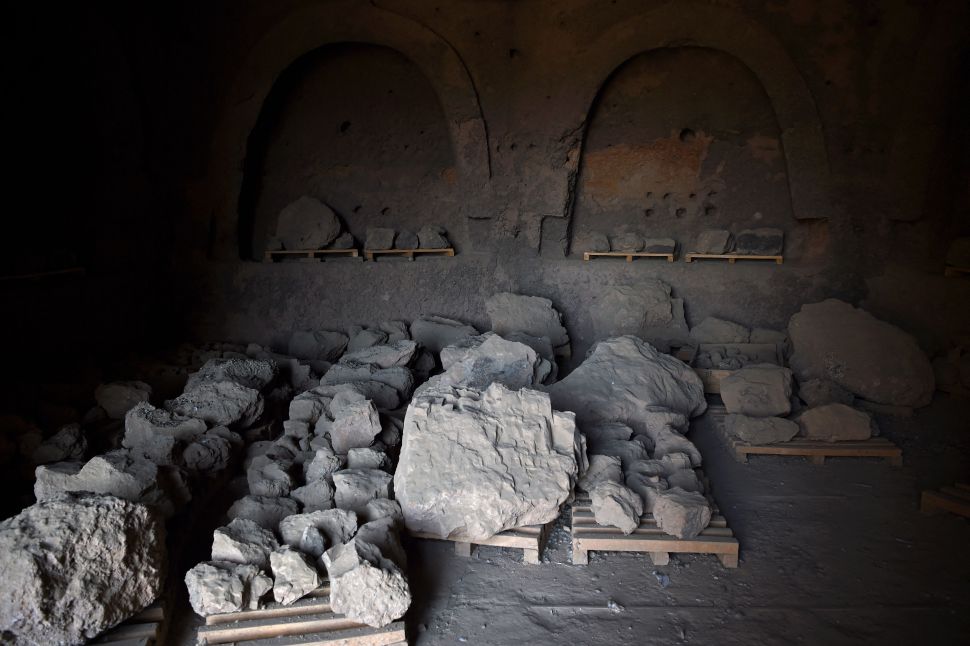