German American artist Winold Reiss was a “propagandist, portraitist, illustrator, muralist, architect, designer, [and] teacher,” as a new catalogue of his work describes. Published to accompany a forthcoming exhibition at the New-York Historical Society, The Art of Winold Reiss: An Immigrant Modernist conveys the variety and volume of Reiss’ early 20th century work. The “immigrant modernist” framing reflects Reiss’ adopted city of New York, founded on the twin pillars of immigration and constant change.

Reiss was one of the many immigrants who have shaped the U.S. art scene with their fusion of forms, adapting to their new home and changing it in turn. Reiss’ variations in style and medium are revealed in an impressive range of commissions, from softly sketched portraits to jazzy graphics to sedate, coordinated interior designs — all of which are explored in the book’s essays by Marilyn Satin Kushner, Jeffrey Stewart, C. Ford Peatross, and Debra Schmidt Bach. Reiss’ work was as chameleonic as the city, which may be why much of it remains so modern-looking today.

Modernity is an endlessly evolving definition. New York is an old city by American standards. But it has always been a modern city, too, because of its ever-changing nature. Just as New York’s streetscapes and skylines have expanded, contracted, and evolved, Reiss continually shifted his mediums and styles across the decades. That energy and curiosity are what make Reiss an essentially modern, and essentially New York, artist.

Reiss was an integral part of the aesthetic leap into what was deemed modernism at the turn of the century, with its sleek lines, bold color, and abstract forms. After studying art in Munich, Reiss followed his early fascination with the fantasy of the American “Wild West” to the States. He landed in New York at age 27, in the same year that the 1913 Armory Show galvanized the influence of European modernism in the U.S. Reiss’ job at the International Arts Service, a poster printing company, gave him his start at the confluence of the flourishing fields of illustration, graphic design, and commercial design. He soon began to teach and create work that ranged across ads, magazines, book jackets, furniture, and interiors.

Reiss’ polymathic art was characteristic of his roots: “there isn’t a good artist in Germany who wouldn’t design a poster,” he wrote. His commercial commissions took off soon after he launched his first “graphic identity” project for the Busy Lady Bakery, which encompassed packaging and interior design. Writer (and fellow immigrant New Yorker) Maeve Brennan observed the passage of city life in several Reiss-designed restaurants, including the popular Longchamps chain. “It is in daily life, looking around for restaurants and shops and for a place to live, that we find our way about the city,” she wrote. “And it is necessary to find one’s own way in New York.” Reiss was among the many who did.

An estimated 100,000 people a day would have found their way through a Reiss-designed interior from the late 1930s to the early 1950s, C. Ford Peatross explains in his essay on Reiss’ architectural designs. Reiss’ commissions – conveniently mapped in the catalogue to underscore their extent – included restaurants, theatres, residences, offices, and bars after the 1933 repeal of Prohibition. He was among the first to approach commercial design as a holistic experience, down to menus and matchbooks, prefiguring today’s brands that attempt to ‘maximize’ every aspect of the customer’s experience (including their data). Many of Reiss’ restaurant designs also included designs for furniture, metalwork, lighting, and textiles, but lack of documentation means that the full extent of his work is hard to track. Good art stands out, but good design is often unobtrusive—like the Alcoa Chairs No. 295 and 297 that Reiss designed, precursors to the 1066 Navy chair. These were some of the world’s first mass-produced aluminum chairs, which most Americans have likely sat in at least once without noticing. Consequently, Reiss has remained, for the most part, “one of the United States’ most influential artists and designers of the twentieth century…that you’ve never heard of.”

Many of Reiss’ interior designs have been sacrificed to the ongoing march of modernity. But his thoughtful portraits, a highlight of the book, still resonate with passion and compassion for the city and its residents. Reiss’ artwork depicted both the bustling, ever-changing concept of ‘New York’ and the dignity of the people who comprise it. As Jeffrey Stewart points out in his essay, Reiss modernized portraiture with commercial art techniques, emphasizing sitters’ individuality by sketching their facial features in vivid color against monochrome bodies and backgrounds. As a result, many of the faces seem like they could be spotted on the subway today.

The white Reiss was a visitor in predominantly Black Harlem during its Renaissance, where he created portraits of everyday individuals – like the compelling images of The Librarian and School Teachers – and famous figures like poet Langston Hughes. His experience of Harlem led Reiss to create what Stewart calls “some of the most powerful portraits of Black people made on this continent.” However, Reiss’ ability to recognize and portray the cultural power of Black people made him an anomaly in a still-segregated country. Stewart argues that Reiss’ contribution to bringing the image of the ‘New Negro’ into American modernism also helped to establish Black people as co-creators of modernity among the white milieu that still largely ignored their influence.

While downtown galleries refused to show Reiss’ portraits of Black sitters, one of them sold his entire portrait series of members of the Blackfeet Nation, made during one of Reiss’ trips to Montana (not included in this catalogue, as they fall beyond its New York purview). This bitter example reveals the different kinds of racism operating in America: a fetishized othering that had a commercial audience, versus a total segregation and dismissal. According to Reiss’ son, gallerists stated outright that they didn’t want to attract Black visitors. Reiss’ portraits of modern, self-possessed Black women were also singled out as targets of racist criticism. But Reiss, alongside contemporary artists of color, continued “to make visible to New Yorkers the beauty and dignity of modern America, whether they could see it or not.”

Reiss’ designs also incorporated the influence of Black and Indigenous art, although often far less successfully than his portraits. Debra Schmidt Bach’s essay could go further in its critique of how, in some of his work, Reiss appropriated Indigenous artistic influences and replicated racist stereotypes. Bach explains that his designs for the Almac Hotel’s Congo Room “would offend contemporary restaurant-goers,” trailing off into limp terms rather than expanding the analysis of the art and its context. It seems obvious but important to state that Reiss could create respectful, humane depictions of people of color and still fall prey to racist conceptions of foreign-to-him cultures or fail to understand the impact of utilizing art from a culture that had had so much stolen already.

The art of Winold Reiss remains as complex and modern as its creator. The book brings deserved attention to the range and impact of his work, while also creating a clear picture of the modernity of his time. The 1939 New York World’s Fair, for which Reiss created the Hall of Music, was themed around the “World of Tomorrow.” Reiss’ world of tomorrow is already the world of yesterday. But his art still resonates, because in it he embraces perpetual change and curiosity. That is the essence of modern: to always be asking questions and reaching for new and possible answers. 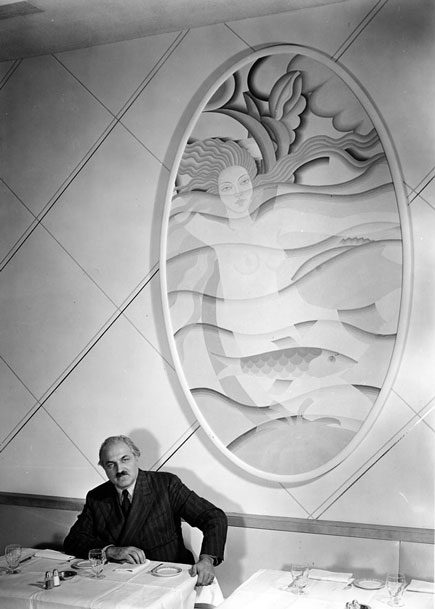