Following the widespread and critical success of the Power franchise, which landed him a massive, four-year deal at Starz, rapper and executive producer Curtis “50 Cent” Jackson has returned to the premium cable network with a striking look at the Flenory brothers, who launched a drug trafficking organization infamously known as the Black Mafia Family (BMF) in the late 1980s.

Created by Randy Huggins and executive produced by Jackson, BMF, which has already been renewed for a second season, is inspired by the true story of two brothers—Demetrius “Big Meech” Flenory (played by his son Demetrius Flenory Jr. in his professional acting debut) and Terry “Southwest T” Flenory (grown-ish’s Da’Vinchi)—who rose from the decaying, inner-city streets of southwest Detroit and fostered one of the most influential crime families in American history. A story about love, family and capitalism in pursuit of the ever-elusive American Dream, the new crime drama series explores the brothers’ intertwined lives, their family dynamics, and their relationship with the community in a way that highlights their upbringing in a religious and traditional nuclear family.

In July 2019, Jackson revealed during a Television Critics Association panel that he had already been working on an adaptation of the Flenorys’ story for four years. Last April, Starz greenlit an eight-episode first season, with Huggins (Star, Criminal Minds) attached as the creator and showrunner.

Having previously worked together on Power—which Jackson says was a fictional take on “some of my experiences and different things that went on around me in my life”—Jackson and Huggins both agreed that BMF’s roots in reality made it an entirely different animal. After speaking with various members of the Flenory family, Huggins said that while “most of the stuff in our story is factual,” he still had to change certain parts in the writing process “to make a certain arc work, because at the end of the day, we are in the business of entertaining people.”

“What I’m really most excited about is, as much as it’s about Meech and Terry, it’s also about Detroit,” Huggins said during a press event in August. “I’m really excited for the world to check that out and get into the rich history that my hometown has to offer during that era of the 1980s.”

According to Jackson, the crime drama will give audiences an opportunity to challenge their own preconceived notions of the Flenory family, whose meteoric rise and fall have been well documented in the media for decades. Given that Detroit was hampered by an economic recession in the 1980s, Jackson said that he thinks viewers will come to understand the circumstances that led the Flenory brothers to turn to a dangerous life on the streets, which eventually turned into a national drug ring with over 500 employees who distributed more than $270 million worth of cocaine across 11 states. (The brothers, along with numerous co-conspirators, were arrested in 2005 for drug trafficking and money laundering.)

“When [people] think of BMF, they think of ‘Blow Money Fast’ ’cause they think of the heyday before the indictment fell, when they were most visible, when there was so much money around,” Jackson told Observer. “This is what made it so important that you see the nuances of the decisions as they go—the human side of it will pull on the strings of your heart at different points, when you see how the experience played itself out. Like, they come from a Christian family … and these choices are still happening based on Meech wanting to live better.”

When she first signed on to the project, Michole Briana White, who plays the matriarch Lucille Flenory, was able to speak with her real-life counterpart to gain more insight into her relationships with her children and her husband, Charles (played by Russell Hornsby). “I think the most important thing for me and for her was to show how these boys came from a good and loving family and that it was the neighborhood that was broken, not the family … You haven’t heard her voice yet,” White said.

In order to add an extra layer of authenticity, the producers decided to cast Flenory Jr.—who took a year and a half of acting classes at the insistence of Jackson—in the role of “Big Meech,” his real-life father, after watching his chemistry read with Da’Vinchi.

“I earned my job. I got on set and I was comfortable, like [Jackson] told me I would be, and I killed it,” Flenory Jr. said. “I appreciate him just for believing in me and it was amazing just being a part of it—and now acting is my dream. I’m going to do it for the rest of my life. I feel like this is why I was placed on Earth.”

He added: “I learned a lot about myself; I learned that I had a lot of my dad’s traits without even me knowing. My family members were telling me that they see him in me. Some of my family members got to come on set and actually get to watch us in action, and they were just in awe, tearing up. It was a beautiful moment, so I believe that everybody loves it and loves how they’re being played and love the whole story within itself.”

For White and Hornsby, the difference in the first-time actor’s confidence from the first to the final day on set was like night and day. “It was really beautiful and wonderful to watch him grow and develop and grow into himself as a young man and as an actor,” Hornsby said.

“He has a really big heart, and he’s so open and willing, and it was really exciting to be a part of that,” White added. “We had one scene earlier on and it was a very emotional scene, and it seemed like, by the end of the day with that scene, he had just transformed, watching him really unlock this door within himself and just open himself to the work. And it was just smooth sailing from there.”

In the show’s freshman season, the Flenorys are struggling to make ends meet, prompting Demetrius to take matters into his own hands against his father’s wishes. As the matriarch, Lucille must reconcile her motherly love for her sons with an innate desire to protect the rest of her family, which “is a really tricky road for her to navigate,” White said. “Her husband is trying to put the hammer down and set a strong boundary. [But] she doesn’t want to lose her kids, and she wants to still be there to support them as much as possible, and it’s challenging for her to try to hold both of those things together.”

Meanwhile, as Demetrius pulls him into the streets to sell drugs, Terry’s worlds as a high-school student and an expectant father begin to collide, putting the lives of all of their loved ones in danger. “They definitely get very close to each other. When you’re dealing on a level like that, the stakes are really high. The bond and the union got to be real strong and tight because one wrong move, that could be the end of your life,” Da’Vinchi said about the evolution of that brotherly bond.

“I think it really made them develop into men much faster,” he added. “And in that time period, the teenagers then were 10 times more mature than the teenagers now, and I think it’s personally because they just didn’t have that many distractions. They were able to mature quicker and articulate themselves and understand what’s going on in the world a little better than how we are now, so I think it really helped them go from boys to men really fast.”

Since premiering last month, BMF has averaged 0.357 million live linear viewers on cable and has debuted as the No. 1 premiere on the Starz app this year. But while the gritty series tells the origin story of two brothers who were indicted for drug possession and money laundering in 2005, the main cast and creative team were quick to reject any suggestion that the show “glamorizes” a life of crime. “There is a huge separation between entertainment and reality,” said Jackson. “I think it would be irresponsible if you didn’t show the results of it. But on the path to it, you tell a story. I would think that you’re glorifying it if you didn’t tell the [whole] story, [if] you didn’t tell the truth about the results of it and how it actually happens.”

BMF, at its core, is a story about familial love, “and it’s about these guys that didn’t really have an opportunity,” Huggins said. “I’m not judging those decisions, but they made decisions that they thought were the best for them at that time. I’m not sure it can encourage people to follow down that road because ultimately, the guy’s sitting in jail … So yes, we show you all of this, but we do show you the repercussions of your actions and your decisions.”

“This is a family drama and I think it’s important for people to understand that,” added Hornsby. “There are consequences to your actions … and we’re not here to glamorize anything.  We’re not here to say that this is the way to go, but we are here to tell you a story from our perspective, a story that needs to be told.” 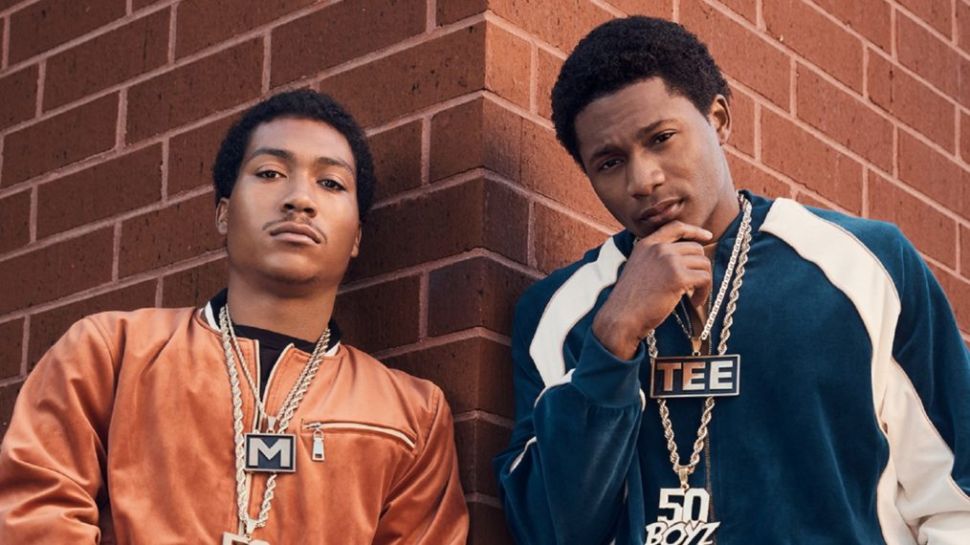