On October 1st, the organization Confront Art, which supports public art projects that promote awareness of social issues, launched an exhibition in New York’s Union Square that consists of three new sculptural busts of George Floyd, John Lewis and Breonna Taylor. Only two days later, the bust of George Floyd was vandalized by an unknown assailant who splashed the sculpture with grayish paint, the NYPD is reporting. The incident also marks the second time the George Floyd bust has been compromised: in June, when the artwork was on display in Brooklyn, the sculpture was marred with a White Supremacist tag and doused with black paint.

George Floyd bust in Union Square splattered with paint this morning, it just went up earlier this week, John Lewis and Breonna Taylor statues nor damaged, police are en route to dust for fingerprints, according to Confront Art rep on site. pic.twitter.com/5PBRWBQTBc

Made by the artist Chris Carnabuci, the sculptures stand 10 feet tall and have been placed on bases inscribed with various dedications from family members of the deceased, noteworthy musicians and other social justice figures. New York City police captured a video of the vandal: a man on a on a skateboard skates past the statue, squirts it with paint and goes on to make his escape. “Vandalism of any sort is not an action that is productive or meaningful,” Carnabuci said in a statement. “Actions like this remind us that we have a long way to go, and we will never stop fighting.”

The NYPD are still on the lookout for the skateboard assailant, who was captured on video wearing black shorts, a neon green t-shirt, a forest green hoodie and a black hat. “The fact that there is a diversity of opinion on George Floyd is probably the main reason for this exhibit,” Carnabuci added in the statement he released after the vandalism was discovered. “SeeInJustice aims to inspire civil discourse — that we may have a place to discuss our differences and hear each other out.” 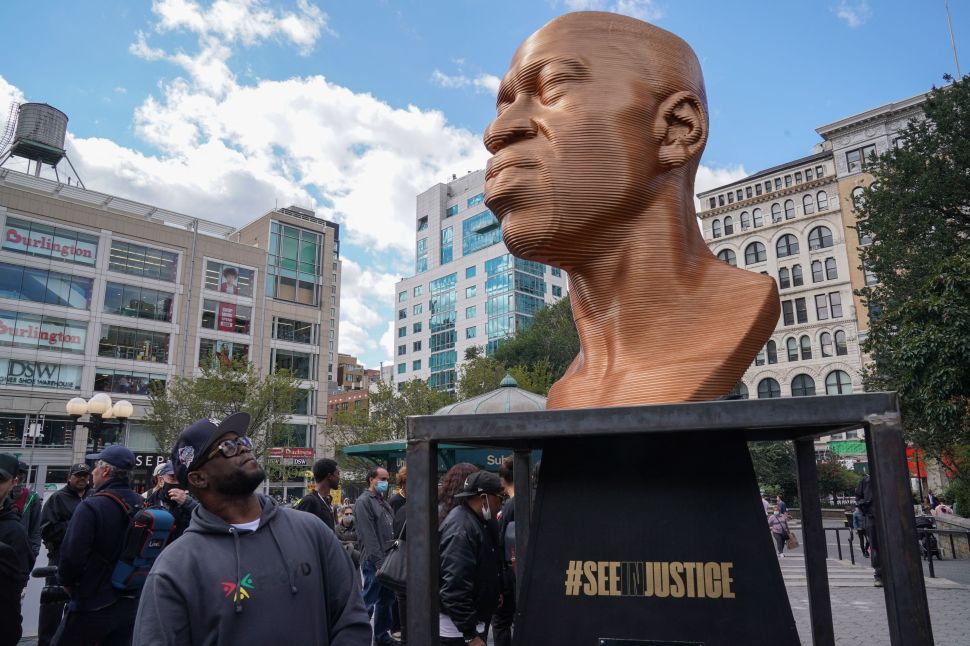