Oftentimes when a looted work of art resurfaces in the art world, much effort is put into returning it to the original owner, or at least the heirs of the original owner. In the case of Meules de blé (1888), a canvas by Vincent Van Gogh, a modification is set to unfold: Christie’s is going to auction off the painting in November as part of the sale of the collection of Edwin Cox, an oil magnate and prolific art collector. According to reports, funds from the sale will be funneled towards the heirs of Max Meirowsky, the industrialist who originally purchased the work before being forced to auction it off at a Berlin auction location.

“It is especially moving that Christie’s Restitution has been so deeply involved with this collection,” Marc Porter, chairman of Christie’s Americas, said in a statement. “We have made WW2 period provenance research a hallmark of our expertise, inextricably a part of the art historical framework.” Meules de blé is expected to sell for between $20 and $30 million. Van Gogh tends to continue to pop up in the news due to the endless relevance of his body of work.

Recently, researchers discovered the exact location of Van Gogh’s final painting with the aid of a vintage postcard, and “new” drawings made by the master artist continue to pop up in shows and exhibitions around the world. That’s the benefit of being one of the post celebrated painters of the 21st century: audiences will always be hungry to uncover more information about your body of work, and auction houses will always be interested in structuring sales around interesting narratives related to your work. Of course, as is often the case, the artist suffered as much as the world continues to delight in his art. Researchers have postulated that Van Gogh suffered from bipolar mood disorder and borderline personality disorder in addition to alcoholism. 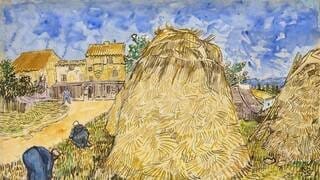