On Wednesday, the controversial statue of Theodore Roosevelt that still stands sentry outside the American Museum of Natural History in Manhattan was splattered with red paint, seemingly in anticipation of Columbus Day on Monday. The statue, which depicts Roosevelt on horseback and flanked by an Indigenous man and a Black man, has attracted controversy for years for its colonialist viewpoint and execution. Earlier this year, the New York City Public Design Commission unanimously voted to take down the statue and relocate it to a cultural institution that has not yet been named that will be dedicated to the former president’s legacy.

Even in anticipation of the statue being removed, it appears that the figure of Roosevelt is nevertheless still a target. “Other big cities have been proactive in removing offensive monuments and renaming Columbus Day,” Decolonize This Place told Hyperallergic while emphasizing that the organization had nothing to do with the recent paint splattering. “What is wrong with New York? It’s been 16 months since the Mayor agreed to take away the Roosevelt triptych, and he still has not moved to properly recognize Indigenous Peoples Day.”

The statue in question is officially entitled Equestrian Statue of Theodore Roosevelt, and it was commissioned in the 1930s by the Roosevelt Memorial Association and sculpted by the artist James Earle Fraser. “It has become clear that removing the statue would be a symbol of progress toward an inclusive and equitable community,” Dan Slippen, the vice president of government relations at the Museum of Natural History, said this summer.

Meanwhile, a statue of George Floyd that had been set up in Union Square was also vandalized this week. No matter the motivation of the vandals, it appears that this is a dangerous time for New York City’s public art. 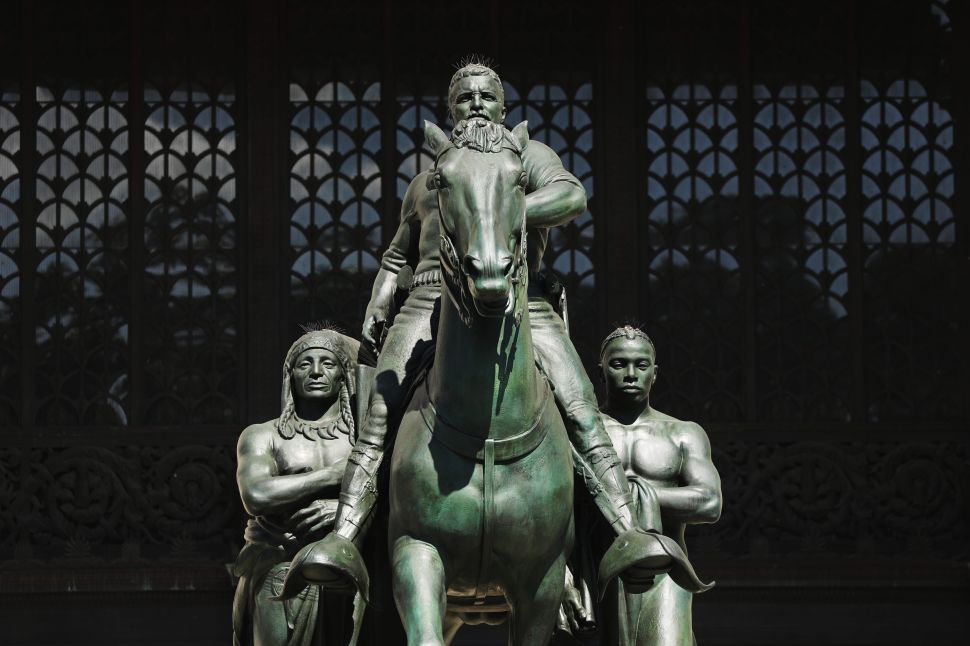