No matter what the circumstances, Banksy always seems to manage to pull one over on the art world: according to new reports, the artwork that the artist notoriously shredded in front of an appalled audience in 2018 sold at auction at Sotheby’s on Thursday for $21.9 million. This sale marks a new auction record for Banksy and perhaps proves definitively that there’s nothing the artist’s fans won’t embrace from him with arms wide open. Also, tellingly, the sale indicates that another central Banksy idea has been proven correct: the partial destruction of his work only increases its value exponentially.

For another example, when Banksy creates graffiti works and leaves them scattered on walls around small towns in the U.K., they’re often ripped from the buildings in their entirety by gallerists who want to repackage or resell them; in other instances, Banksy works are covered up or stolen wholesale, which adds to his art’s general air of intrigue. In the case of Love is in the Bin, which was formerly known as Girl with Balloon, Banksy turns one of his tired illustrative tropes into a commentary on the willful gullibility of art market consumers.

Banksy also excels at riding the waves of global misery in order to come up with new artistic creations. During the pandemic, the artist cranked out homages to health care workers, seaside graffiti efforts, bathroom rats conjured during lockdown and even subway art encouraging mask-wearing. There’s tons of worthwhile and thoughtful work generated during the pandemic that empathetically deals with the wellspring of misery that burst forth; Rashid Johnson’s “Untitled Anxious Red Drawings” come to mind. And in a sense, the anonymous graffiti artist isn’t entirely to blame for the monster his art has created. In fact, the actual content of his creations have become a footnote. Banksy himself has become indistinguishable from the art market; the behavior of the insatiable art market itself is his Frankenstein. 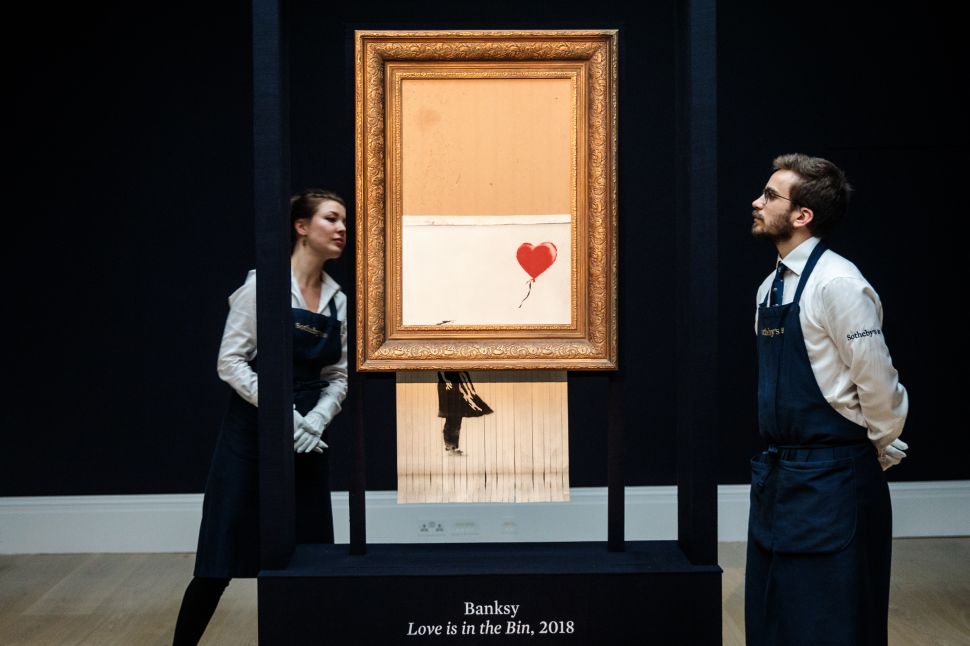 Filed Under: Arts, Visual Art, Love is in the Bin, Girl With Balloon, Rashid Johnson, Banksy