The eighth annual Saint Barth Gourmet Festival will return next month, as 11 internationally-renowned chefs will descend upon the Caribbean isle to showcase the best of French gastronomy.

The epicurean tradition, which was canceled last year due to the coronavirus, will take place from November 10 through November 14. During the gourmet event, invited chefs work with local culinary teams at several of the island’s upscale hotels and restaurants, to create unique, multi-course tasting menus that give guests a glimpse of the visiting gourmands’ best takes on French cuisine and dishes.

You don’t have to be a foodie to appreciate the cuisine and scenery of the picturesque Caribbean island, of course, and November happens to be one of the loveliest times to travel to Saint Barthélemy, since it’s just before the hectic tourist season. If you’re considering a trip to the dreamy destination this year (even if it’s not for the Gourmet Festival), you’ll want to book a stay at one of the island’s most unique and luxurious hotels. While there’s no shortage of glamorous accommodations in St. Barth, certain spots always manage to stand out. Below, see seven of the best hotels to book for your next trip to the French island.

Hotel Christopher is situated right on the above Pointe Milou, and while it doesn’t have an actual beach, it does offer picturesque sea views and a very Instagrammable infinity pool. The chic hotel, which reopens for the season on October 15, is composed of 29 rooms and 19 suites, as well as three new four-bedroom villas. The Creole-inspired interiors feature lots of stone, wood, resin and grey marble, and most of the accommodations have private terraces. There’s also a Sisley Spa with five treatment rooms. Hotel Christopher is one of the hotels that partnered with a visiting chef for the festival; Chef Sébastien Vauxion is working with the hotel’s chef Arnaud Faye at the newly opened Rivyera restaurant for the gourmet extravaganza. From $579 a night, Hotel Christopher.

The glitzy Eden Rock is perched atop St. Jean Bay, and it comes with a colorful and celeb-filled pedigree. The hotel, which reopens on October 21, was first built over 50 years ago by aviator Remy de Haenan, who was also the first mayor of Saint Barthélemy, and is currently owned by Pippa Middleton’s in-laws, David and Jane Matthews. Over the years, the hotel has hosted guests including Greta Garbo, Howard Hughs, Leonardo DiCaprio and Rihanna. The Eden Rock, which is part of the Oetker Collection, unveiled the results of a two-year renovation back in 2019; it’s now comprised of 37 rooms, suites and villas. While the hotel isn’t partnering with a chef for the gourmet festival, it does offer plenty of luxe dining options, as Jean-Georges Vongerichten is the mastermind behind Sand Bar restaurant. From $1,063 a night, Eden Rock-St. Barths.

Cheval Blanc occupies one of the most coveted pieces of real estate on the island, right on Anse des Flamands. The hotel also features two pools, in addition to two adorable boutiques with resortwear staples from quintessential St. Barth brands like Poupette. The luxurious hotel, which was acquired by LVMH in 2013, is one of the larger resort options in St. Barth, with 61 rooms, suites and villas, yet it still feels incredibly intimate. All of the rooms are decorated in a soothing, coastal-inspired neutral color palette, with an array of indulgent amenities that include the hotel’s own signature fragrance, Tropical Chic, created by Guerlain’s Thierry Wasser. There are also exclusive Guerlain treatments at the Cheval Blanc Spa. The hotel is participating in the gourmet festival, as Chef Jean Imbert is in residence at La Case, though here are casual dining options too, including La Cabane and the poolside White Bar. From $859 a night, Cheval Blanc St-Barth Isle de France.

If you prefer an ultra-private hotel, look no further than Le Toiny, located on a hillside atop Anse de Toiny. The exclusive spot contains just 22 suites and two villas, spread out over an impressive 17 acres of land. The spacious 1,700-square-foot suites all have private terraces and personal pools, with incredible ocean views. The hotel, which reopens on October 15 with newly redesigned interiors courtesy of Lady Bee Osborn, is also revealing a new four-bedroom offering, Villa Nureyev, this year, for those that want even more space to sprawl around. The secluded hotel is also home to the Beach Club, which is only open to Le Toiny guests and visitors with reservation, as well as the slightly more formal Le Toiny Restaurant. From $1,096, Le Toiny.

Hôtel Barrière Le Carl Gustaf just opened last year, and the lavish 21-room spot has the honor of hosting the opening ceremony for the Gourmet Festival on November 10 at Le Fouquet’s Brasserie, where Parisian Chef Pierre Gagnaire will be in residence. Aside from the exciting culinary aspect, the hotel is also outfitted with a relaxing zen-inspired spa and is home to Shellona, the iconic private beach club on the aptly-named Shell Beach. From $1,043 a night, Hôtel Barrière Le Carl Gustaf.

Le Guanahani originally opened in 1986, but closed after the 2017 hurricane season and was subsequently taken over by Rosewood Hotels. It finally reopens as a member of the luxe Rosewood collection on November 4 (just in time for the Gourmet Festival!), and will reveal a major renovation for its very first season. The resort, which occupies over 18 acres and looks out upon Marigot Bay beach and Grand Cul-de-Sac beach, features 66 rooms and suites, as well as a fitness center, spa, tennis court and a children’s club, for those looking for a more family-friendly hotel. It’s also home to the new Beach House at the Rosewood Hotel restaurant, where acclaimed French Chef Arnaud Lallement will take up residence for the Gourmet Festival. From $950 a night, Le Guanahani.

The lovely and unpretentious Le Sereno was recently renovated in 2018, and is sure to appeal to the traveler who adores understated and minimalist luxury. The Leading Hotels of the World spot, which sits on 600 feet of beachfront on Grand Cul-de-Sac, is comprised of 39 suites, in addition to three larger four-bedroom villas. It’s also where you’ll find the incredible Service Spa by Valmont, because who doesn’t want extra pampering while on vacation? For the Gourmet Festival, Le Sereno is partnering with Chef Juan Arbelaez, who will take over the Al Mare restaurant. From $865 a night, Le Sereno. 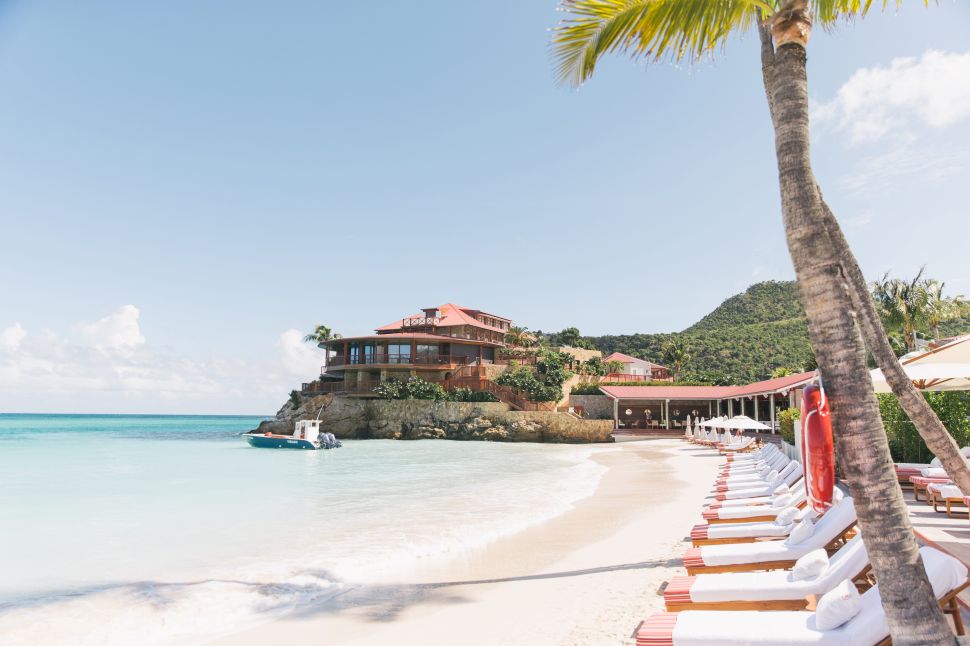