Your actor is a sort of voluntary hostage. They surrender themselves to writers, directors, and designers to channel other people’s thoughts and emotions. Actors can sometimes write for themselves or improvise and yes, they discover plenty in rehearsal. But essentially they’re vessels, ready victims waiting to be kidnapped by the casting agent.

That makes the great Deirdre O’Connell’s achievement doubly impressive in the electrifying Dana H. She plays a woman who for a time was abducted and held by a dangerous ex-con. He was a heavily tattooed, mentally unstable member of a white-power group, and he shuttled his prisoner across state lines, committing crimes and evading law enforcement. Here’s the thing about this harrowing fugue state of a play, written by Lucas Hnath and directed by Les Waters: O’Connell never speaks. To portray an ex-captive, she lowers her voice down an oubliette.

O’Connell sits on a set that resembles a Florida motel room and lip-syncs an edited recording of Hnath’s mother, Dana Higginbotham, interviewed by director Steve Cosson about five months of captivity with a violent sociopath named Jim. Higginbotham was a counselor in an Orlando hospital psych ward at the time (she’s a hospice chaplain now), where she tried to help Jim, who attempted suicide at least twice. He fixated on this good samaritan, broke into her home, punched her unconscious, and took her on the road.

Higginbotham remembers much from these events of 25 years ago, despite trauma blurring some details. A high-pitched beep in the audio indicates a cut in the transcript. At times, O’Connell pages through a manuscript in her lap, which Higginbotham compiled to record the experience and deal with PTSD. On one level, Dana H. is about summoning and exorcising a demon, but on the other, it’s a playwright-son reaching out through intermediaries to grasp the mystery of his mother. To find out if she even is his mother, anymore.

You may think the distancing effect of lip-syncing and a mostly static staging (Dana H. sits, pulls bottled from a handbag, pats the arm of the chair) make for dry viewing. But if you have a working nerve in your body, you’ll scoot to the edge of your seat and hang on every word, fearing the worst while also certain it can get worse. Dana H. is a high-tension narrative of abasement and subjugation, a firsthand account of human evil and survival. Beyond the true-crime-podcast allure of the material, the event is pure theatrical adrenaline.

Scenic designer Andrew Boyce covers the motel room in Necco Wafer pastels: pink wall, teal easy chair, powder-blue door, mint-green bathroom walls. These gentle tones should calm a mind down, but here they have the opposite effect. We glance at the hideous floral-print bedspread and imagine gruesome couplings. Paul Toben’s lights gradually contract and darken as the tale wends into deeper darkness, and both lights and sound (latter by the wizardly Mikhail Fiksel) go truly bonkers at a crisis point. There’s much I’d love to tell you about how Hnath structures the piece, but that would reveal Waters’s shocking tactics, which galvanize the space into a lysergic sensory assault.

As spectators, we often rely on “double vision” in order to process and enjoy theatrical illusion: when a play calls for cross-dressing or other gender blurring; when an adult plays a child; when a human plays an animal; when characters die before us. That’s how we reconcile reason and imagination: good old suspension of disbelief.

Yet the production premise of Dana H. induces a kind of synesthesia that nearly short-circuits double vision, layering documentary verité and theatrical trickery. You know the voice you’re hearing is not the actor’s, and yet it talks the stomach-churning truth. The voice recalls events from decades ago, yet here’s O’Connell in a motel room that you want her to get out of now. This slippage between where and when we are and how to credit the evidence of our senses is compounded by Waters’s transformation of the room from neutral interview space to pulsing, strobing trauma box. The room holds the memory of Dana’s torments, especially the night when — a violation we’ve grimly expected — the manic, methed-up Jim rapes her.

It’s hard to imagine a performer more suited than O’Connell for such a meticulous symphony of pain, regret, damage—all grounded in oceanic empathy and strength. O’Connell’s trademark aura is Aunt Who Has Seen Some Shit: She’s twelve-stepped, gotten out of a cult, probably pulled a gun. This outstanding actress, incapable of an inauthentic moment, uses her repertoire of weary smiles, fleeting winces, grimaces and wry humor to blend seamlessly with the audio track.

You probably know that Dana H. is running in rotation at the Lyceum Theatre with Is This A Room (both played at the Vineyard Theatre pre-pandemic). They make a perfect pair of contemporary formalist plays, a mind-blowing two-show day. Both are built around transcripts about women in peril, the exercise of male energy without compassion, controlling and defining a woman’s body. They are superbly designed and directed spectacles, evoking almost unbearable dread without easy cathartic release. They are feminist stories, but also roam psychological badlands beyond ideology or morality.

In case I’m not making myself clear: At present, the most exhilarating theater in New York is at the Lyceum. Pray other gatekeepers are inspired by producing triumvirate Matt Ross, Sally Horchow, and Dori Berinstein who, along with a dozen others, moved these productions (which originated variously at the Goodman Theatre, Center Theatre Group and Vineyard Theatre) to the Main Stem. Time will tell if the Broadway ecosystem can sustain such a high level of artistry and complex storytelling, but for now, let’s enjoy the sense of freedom. 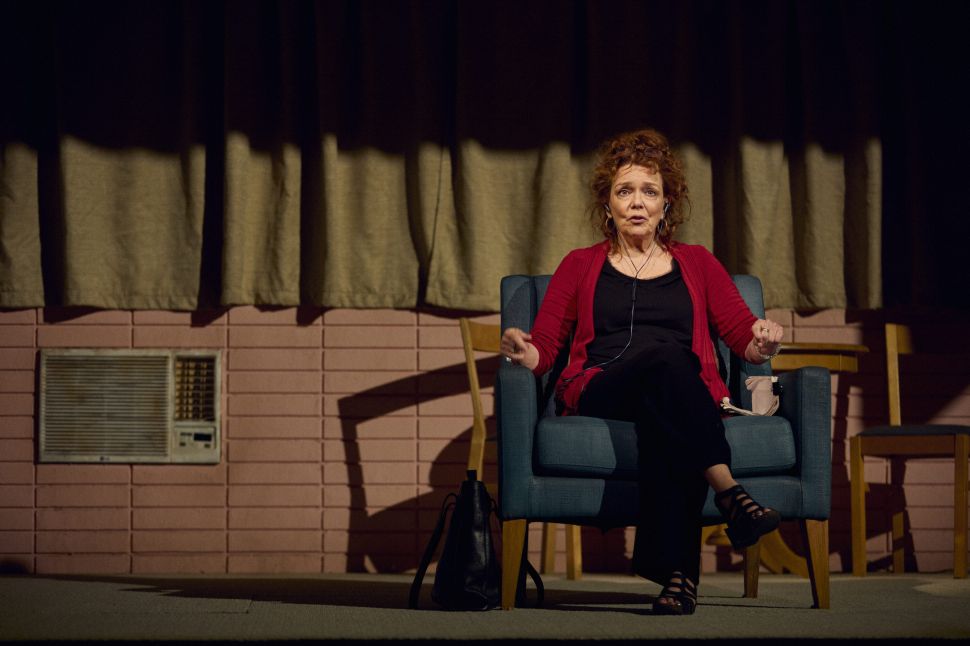