Graced with good looks and unrivaled talent, Washington quickly bloomed into a lauded actor early in his career, opening movies on his star power alone. Even more integral to his worldwide appeal, he became an important Black figure and one of the few personalities worthy of the single name moniker: Denzel. Once Washington ascended to the culturally unanimous title of G.O.A.T. (greatest of all time) something happened. We simply left him up there.

He’s the prestige bottle of single malt scotch we put on our top shelf. It elicits fond memories and superlative comments but ultimately collects dust. There’s comfort in the reliable luxury that half-consumed bottle provides, but we ultimately end up reaching for the other labels: the novelty flavors and less refined expressions. As any spirits expert knows, age is beneficial until it’s not. It’s best to indulge while we still can.

Now 66, Washington continues to extend his legacy into the autumn of his career. But somewhere along the way, audiences became spoiled by his prolific resume. We’re living through one of, if not the, greatest acting careers in history but have lost interest in engaging with and celebrating it. Despite Oscar nominations, Fences and Roman J. Israel, Esq. failed to provide a lasting impact on the zeitgeist, with neither cracking the top five of a week’s box office. Even with widespread industry recognition, his latter-day characters have been treated as icing on the cake rather than definitive entries in his sterling career. He’s been crystalized as a pre-Obama portrait of Black excellence.

This year, he stars in The Tragedy of Macbeth, which will saunter into theaters in December. It’s a historically enormous role for any actor that Washington, with his bottomless capacity for excellence, finds a way to make his own and deliver one of his finest performances. It’s one that might resonate the way his earlier work did and remind us why he is the true king of Hollywood.

The Career of Denzel Washington

It happened sometime around 2002.

From 1988-2000, Washington was nominated for four Oscars, winning the Best Supporting nod for Glory in 1990. His spellbinding performance as Malcolm X in the eponymous 1992 Spike Lee film led to a sensational run that included The Pelican Brief, Philadelphia and Crimson Tide. His second nomination came for his depiction of middleweight boxer Rubin Carter, who was wrongfully convicted of murder, in The Hurricane. It capped off more than a decade of dominance for Washington.

In 2002, he finally won the Oscar for Best Actor as a corrupt detective in Training Day. At the time, he was only the second Black actor to win the honor in the award ceremony’s 74-year history after Sidney Poitier. In Washington’s acceptance speech, he mentioned his 40-year pursuit of the honor. The triumph officially solidified his status as one of Hollywood’s all-time greats. But it’s in the wake of that victory that his cultural presence begins to drift, as evidence by the lack of fanfare for his recent nominated work.

Interspersed with Washington’s heavy-hitting dramas are a slew of mid-budget action thrillers. It begins with Ricochet in 1991 but picks up steam in the mid-to-late 90s. He lends his talents to directors from his past; revisiting partnerships that have previously struck gold. He returns to collaborate with Johnathan Demme, Spike Lee and Carl Franklin. He makes three more movies with Antoine Fuqua, who directed him in Training Day, and four more with his Crimson Tide boss Tony Scott.

It’s this reliable adult-skewing box office success that seems to have obscured his brilliance. To be clear, these are, on the whole, good movies. They are the kind that are not made any longer and now exist as fond memories of a simpler time. Some of these projects could play ad-libs with the leading men of their day as the top-billed talent. Washington was always the X-factor that buoyed these efforts, elevating them beyond their mainstream contemporaries.

Perhaps the consistency and frequency made us dismiss him. Maybe we came to expect he would be great in whatever he did. His ability to be remarkable became unremarkable. Would that happen if he was more selective? What if his career reflected one of his great contemporaries, Daniel Day-Lewis? Washington made 18 movies in the ’90s alone while Day-Lewis has 20 credits in his entire career. Would it change our perception of him?

Contributing to our complacency may have also been a lack of leading roles for a Black actor of his age. His most prominent peers tend to fill supporting roles like Samuel L. Jackson, Idris Elba, Don Cheadle and Jeffrey Wright. Many of these actors have also ridden the franchise wave that Washington doesn’t appear to be interested in engaging with. Though it is one that his counterparts of the next generation embrace.

We tend to look for the new and novel to crown as the future marquee names. Despite the fact he remains active, Washington has already become a benchmark. Who’s the next Denzel? When we consider Will Smith, Michael B. Jordan or his own son, John David Washington, as actors who will carry the torch, it contributes to relegating him to the past.

The role requires no small amount of gravitas and has been played by towering figures like Orson Welles, Ian McKellen and Peter O’Toole. At 27, Laurence Olivier played Macbeth in a production he described as “disastrous.” He famously said the role is one of Shakespeare’s marvelous conceptions that an actor can try to reach and noted on The Dick Cavett Show that it’s not about having enough technique or voice or emotion. He found the part demanded experience of life as much as experience of acting.

Joel Coen’s interpretation of the superstitiously ineffable tragedy curiously reflects Washington’s journey. An aged Macbeth achieves a great victory. His achievement is acknowledged by King Duncan but he’s overlooked for a greater honor he feels he deserves. He and Lady Macbeth, played by Frances McDormand (who also produces), conspire and execute his ascent.

When Macbeth is introduced, he appears slowly from a frame obscured by white smoke. His full emergence is preempted by the sound of his signature laugh. It’s an admirably casual display of confidence. Before we even see his face, we know who we’re dealing with and that this is going to be fun for him.

It’s a role thematically and conditionally suited for Denzel Washington. The lines that now crease his still beautiful face bear the markings of an actor who’s seen his share and is ready to risk it all. The power and charisma Washington is able to impart to the haunted king make for one of his great performances and what might be the start of the next phase of his career.

There’s a scene in which Washington sits on the throne as leaves descend around him. It’s a man in the autumn of his life that did what he had to do to wear his crown. It would be a tragedy in itself if Washington didn’t receive another Oscar nomination and a greater one if he doesn’t win. It’s a performance that will no doubt spawn a number of reaction GIFs and hopefully return Washington to his rightful place on the throne. 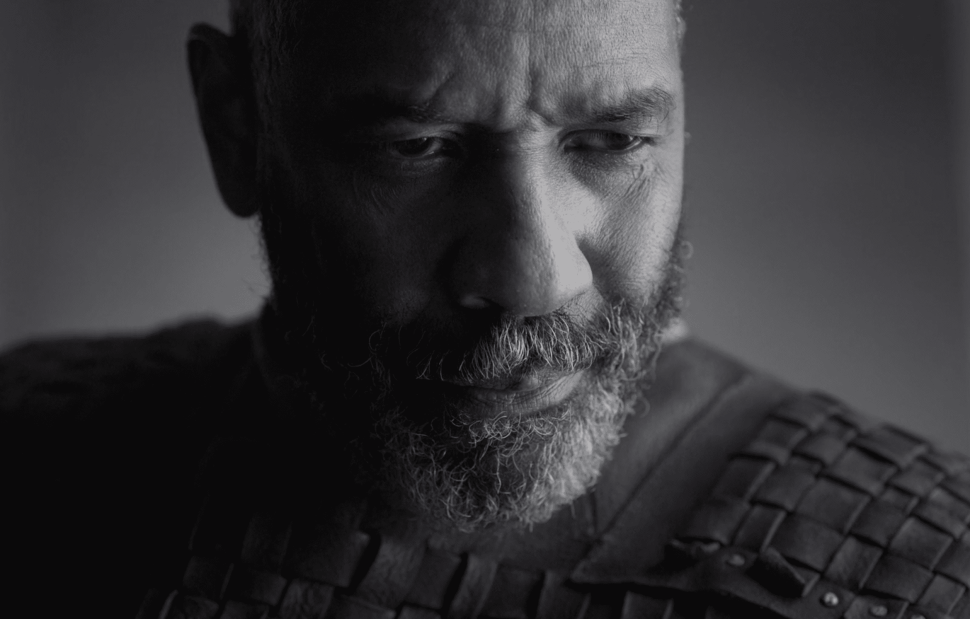