The fantastic worlds of Dune and Star Wars might seem entirely different from one another, but what if they were simply two sides of the same coin? When looking at the various elements that comprise both franchises—the former launching with Frank Herbert’s 1965 novel and George Lucas starting the latter in 1977—it’s easy to see how their connections could go well beyond the coincidental. Imagine, instead, if the story of Dune formed the past to the galaxy of Star Wars.

Crazy as it sounds, this isn’t exactly a new idea among both fandoms. Previous theories tend to put Star Wars in the past while showcasing Dune as the future. I think they can be swapped around for a more natural progression and fit. Granted, it’s all subjective considering the clear disparity between the franchises. But it’s fun to see how the details of these universes align, particularly with Dune arriving in theaters and on HBO Max this weekend.

As always, it’s best to take your fandom with a hefty dose of fun and never take it too seriously. With that in mind, let’s take a look at how the universe we know throughout the Dune series could ultimately morph into the Star Wars galaxy…

Warning: The following contains spoilers for the Dune book series

Location, location, location—this is the most obvious place to begin. Arrakis is the focal point of everything in the Dune saga; sitting in the middle of all the goings-on within the universe. Similarly, Tatooine plays a major role in Star Wars (though not nearly to the same degree) and both share the same dominating feature: lots and lots of sand.

It’s easy to see how Arrakis could have ultimately turned into the world of Tatooine if you’re familiar with the story. Despite having been “melted” in an attack at the hands of the Honored Matres in Heretics of Dune, Arrakis managed to survive. Under the burnt out surface, the sand and worms were still there. Over the millennia, the planet could repair itself and return to some semblance of habitability.

The impact of the attack, however, altered the planet forever. While it was still a harsh wasteland, it became a bit more habitable, allowing for the return of life in the form of Star Wars‘ Jawas and animals beyond the gigantic worms. This resurgence brought back Dune‘s iconic natives, the Fremen, who pull themselves from the depths of the universe to their ancestral home.

Eventually, as they return to their roots, they see everyone else as outsiders, intruding on their space. Ultimately they fight back (not unlike they used to), but their attacks become ever more brutal, raiding against settlements and loners alike. Eschewing life in the Sietches, which had mostly been blasted away, they take on an even more nomadic lifestyle, insulating themselves further away from “society.” Thus, the Fremen become the Tusken Raiders who seem both misunderstood and worthy of being feared. There are even glimpses of their Fremen heritage in their nomadic nature, and how they hide their true strength by traveling the sand dunes in a unique strategic fashion.

The iconic sandworms, who served as both creatures of reverence and the source of the Spice Melange, are no strangers to evolution and change. Even within the Dune novels themselves, we see the worms undergo immense development. Over the course of thousands of pages, the species has fought back from the brink of extinction, spurring a revival that saw them break free from the confines of Arrakis and thrive on other planets and climes throughout the universe.

Thanks to Leto II, the God Emperor, the idea of sentient sandworms (complete with a face) isn’t exactly a new concept. At the end of his long life, where he himself turned into a worm, his death brings about a new generation of the beast. Each one contains a kernel of his consciousness. It stands to reason then, over the millennia, the sandworms could evolve into the Hutts.

Considering their connection to the Spice, which also happens to be an addictive drug in Star Wars, it makes sense that the newly evolved Hutts would take control over their own resource. As the years went on, and they lost the ability to develop their own spice, they turned to other resources, sometimes forcibly. Thus we see the formation of their criminal empire even as they retain a soft spot for their initial homeworld of Arrakis/Tatooine.

An Abundance of Witches

Then there’s the most iconic order in Dune—the ones who pull the strings, guide the Imperium, and led to the creation of the Kwisatz Haderach. The Bene Gesserit witches have endured immeasurable triumphs and defeats throughout the long saga of Dune. While the final books seemed to point towards the order being back near the top, it’s clear their power has waned.

There’s no denying their abilities, however, and the reputation as manipulators with strange powers isn’t an easy one to shake. Would it be so crazy to see Chapterhouse, housing their mother-school, turn into Dathomir, the home of the Nightsisters/Dathomir Witches in Star Wars? Imagine them fully embracing the ‘witch’ moniker as they continue to develop their unique set of skills, becoming even more terrifying to the outside galaxy.

Their deep control over bodily functions imbues them with great power such as the ability to regenerate limbs (you’re welcome, Maul!) and the ability to briefly revive the dead for short periods of time (as seen with the “zombies” who help defend their lands). The sisterhood morphed into the dreaded Nightsisters, who still worked to manipulate the masses, albeit in a more focused manner once the Star Wars era begins.

The Sisterhood is just one of many great “Schools” in the sprawling Dune universe. The Navigator Guild is another, and was arguably the most important for a long period of time. By immersing themselves in the Spice, the Guild was able to see pathways through space that allowed people safe travel across the universe.

Not everyone was able to undergo the dramatic change necessary to become a Navigator, however. It required a person with a special gift and ability to take the spice and turn it to their own, prescient, uses.

However, their services eventually became obsolete. By the end of the final Dune novels, safe space travel was able to be accomplished via computer (which had been outlawed thousands of years earlier in a bloody revolution). Technology was able to bridge the gap, making space travel more accessible to everyone. Without a need to grotesquely transform their bodies for space travel, it’s not a great leap to imagine the guild finding other ways to develop their gifts more naturally, perhaps even coming to understand it as a “Force” they could call upon.

The connection between the Navigators and the orders of the Jedi and Sith seems even more obvious if you go back to some of the Legends-era lore in Star Wars. Before taking on their familiar names, the Je’daii were once gathered together by mysterious ships which inexplicably traveled through hyperspace. On top of that, their hierarchy included Je’daii Journeyers and Rangers; rankings that harken back to their days of travel.

Of course, they didn’t always agree on how best to utilize their powers in a post-Navigator galaxy, which resulted in schisms, civil war, and the formation of the Jedi and Sith orders which gave birth to their eternal feud.

On top of these bigger connections, there are a number of minor ones to consider as well. Take Star Wars’ B’omarr Monks.

This order believed in removing all sensation in order to enhance the power of their brains. So they placed them into jars attached to spider-like mechanical bodies. This feels awfully familiar to the Cogitors introduced in Dune’s Butlerian Jihad, who also removed all sensation in order to keep their minds pure. This also led to the creation of the villainous Cymeks who had horrifying mechanical bodies. The overlap is apparent.

Then there’s Dune’s (former) Imperial homeworld of Kaitain, a world that’s essentially one gigantic city. Since Coruscant is one giant metropolis in Star Wars, built on top of the remnants of previous generations, the connection between those two planets seems fairly obvious.

That’s not to mention the Tleilaxu, who mastered genetic manipulation and become the masters of cloning (gholas as they’re called in the Dunieverse) technology. Hell, their society came so far as to isolate themselves, relying solely on genetic replication to move their race forward through the generations…Not unlike a certain elite group of cloners known as the Kaminoans in Star Wars.

We know these two franchises don’t actually share the same continuity. Nonetheless, it’s apparent how significantly these two pillars of science-fiction have influenced one another over the decades. Star Wars began with narrative and conceptual threads tied to Herbert’s work, yet we can see the reciprocal impact those films have had on the newer Dune novels from Brian Herbert and Kevin J. Anderson (especially since Anderson wrote a number of older Star Wars books). 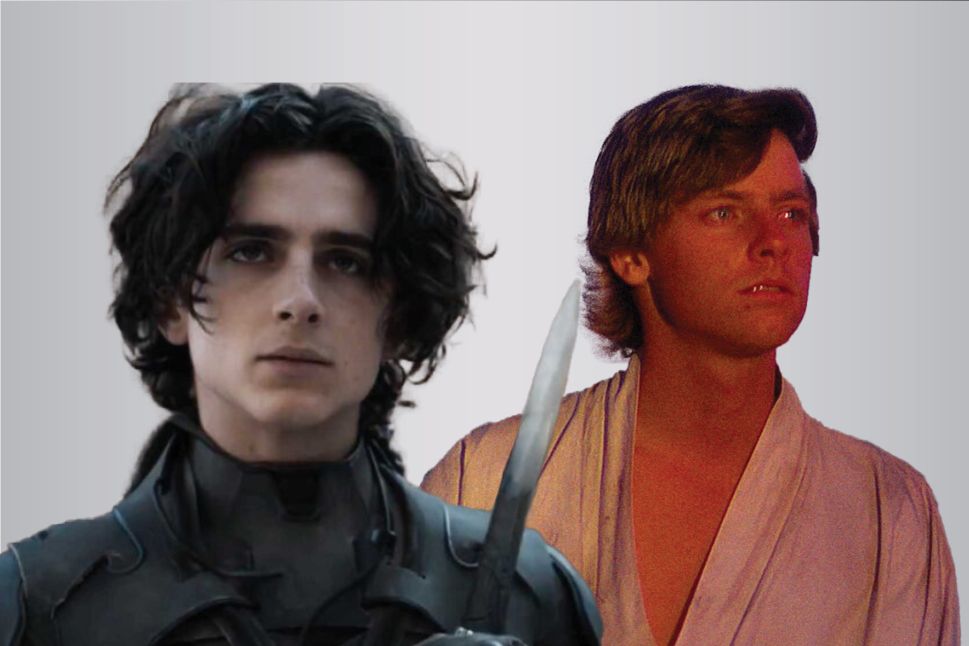