“I could be doing a lot of other terrible jobs,” Ricky Velez says, speaking to Observer over Zoom about his new HBO comedy special, Ricky Velez: Here’s Everything. He grins and adds, “This could have gone way worse.”

The Queens-raised actor and writer may seem surprised to be here, but there’s been a lot building up to this moment. Velez’s career path has been defined by hard work, connections to people like Judd Apatow and, of course, really good jokes. He’s been a correspondent on Comedy Central’s The Nightly Show with Larry Wilmore and appeared on Netflix’s Master of None, although a real turning point was co-starring with pal Pete Davidson in last year’s The King of Staten Island. But for Velez, this hour-long special is the first time he’s made something that’s really his own.

“Even down to the credits, it’s so personalized,” he notes. “I wrote the credits with my handwriting. I’m really excited for people to see it.”

The special, executive produced by Apatow and Davidson, was filmed in New York City on August 28th at Brooklyn Steel. Velez was able to tape in front of a COVID-secure audience—something he wasn’t initially sure would even be possible. It’s a gleeful, hilarious hour of comedy and it feels extremely personal to Velez. And to have his first-ever stand-up special be for HBO? Well, that’s a tick off the old bucket list.

Here Velez discusses writing and taping Here’s Everything, returning to comedy after the pandemic and why New York City is so central to his work.

How did this special come about?

I was sitting with Judd Apatow at lunch. He had seen a bunch of my stand-up at this point. I had another offer somewhere for a half-hour special. Judd was like, “How about you just come do an hour over at HBO with me?” I was like, “I would love that. Is that an option?” And then it came to be. Judd has been so great to me and I’m so grateful to have him in my life because he’s really one of the better people, especially in this business. When he does believe in you he’s your biggest advocate. He’s done really incredible things and put me in situations that even my agents or managers haven’t been able to do.

How long ago did you actually start writing the special?

I would say everything’s always a work in progress, so since I started comedy. I don’t write write—I do it all onstage and I learn from memory and I expand that way. Overall, since the beginning, as you do stand-up the whole thing is a learning process. This was a just a long learning process.

Was it challenging to work on material during the pandemic when you couldn’t perform?

Yeah, and I think that’s why a lot of comics had a lot of problems during the pandemic. You can play guitar [at home] and still hear it. We’re the only art form that demands an audience to know how good you are. It was really sad and hard. I was lucky enough to be working Judd Apatow and Judah Miller on a script, so I got to stay busy and learn another muscle. But, yeah, I missed comedy more than anything. This is my first love. It was really hard to take off a year.

There were days where you’d just wake up and be like “Are we ever going back to it?” There was an idea in my head where I was like “I don’t think I’ll ever get to do a special with people with no masks on.” I didn’t think that would be a possibility. Or at full capacity. I never thought we’d get back there.

When did it become clear that you could actually tape this special with an audience in a safe way?

Once New York started opening. We played everything by the rules. We did everything by the rules, including with my safety. I had five months to get back on the road and start doing stand-up. Once I got my second [vaccine] shot we waited 14 days and that day I was gone [on tour]. It was a long five months of figuring it out and having all these new ideas and adding stuff in from during the pandemic. And new jokes—I opened the special with two brand new jokes that I learned during that time. It was a really interesting, fun experience.

When you’ve been building up to taping your first HBO special for so long how does it feel when you’re actually standing on the stage telling jokes?

We did two shows. The first show felt like business. At the first show I was like, “This is it. This is what you’ve been doing this for.” After the first show, Neal [Marshall], who was working on my special, came up to me. He said, “Ricky, if the place burns down now you still have a special.” That gave me more ease. And I turned to my writing partner, Judah Miller, and I asked him, “If you can get something out of me that I didn’t give you in the first show what would it be?” He said, “I love watching you have fun onstage.” At that point, I felt like, “We got what we needed, let’s go have fun.” And we had the best time.

So the special is cut from those two performances?

It’s basically the second performance! I think people are addicted to fun. People like being in it. Watching them both, I felt that way.

Can you actually feel that tangible release from the audience after being stuck inside for so long?

You feel that immediately. People wanting to be a part of something. It’s very heavy and you can notice it right away. I perform at the Comedy Cellar all the time and that was probably one of the more interesting things I got to see. It’s been packed since it opened. But when it first re-opened it was only New Yorkers. But then it became infiltrated with tourists. And then out of nowhere the NYU kids are back. It was like watching the world come back.

But the problem that I see—I noticed it right away—is that some people didn’t know how to act the moment they got let out of the house. Too many people had too much to drink and didn’t know the social norms anymore. They lost those.

Stand-up comedy seems like a minefield right now, with a lot of concern about what might be considered offensive. Do you think about that when writing jokes?

Of course. You always try to keep that in mind. But at the same time I think funny is funny. How I write is I go back to the things that make me and my close friends belly laugh and then I try to bring that to stage. But I never try to hurt [anyone] while I write. That’s never the point.

How old were you when you realized you want to do stand-up?

I was 19. I started very young. I stayed in one comedy club, the Broadway Comedy Club, for three years and just learned the ropes. Watched the guys that were really funny. There were guys who weren’t funny. I was very eager to audition for other clubs and stuff like that. I had this one comic, Mike Vecchione, who was actually in The King of Staten Island, and he told me, “Stay here as long as you can, get your act and you’ll be fine.” When I got my first audition it was at the Comic Strip and from there I basically passed through every comedy club in New York City within three months. I was 23, 24 years old.

How much did appearing in The King of Staten Island change your career?

But that movie starting bringing in new opportunities. I was also a co-producer on it. That’s where the writing came in. I got to do punch-up on the movie Judd did during the pandemic—The Bubble. It’s definitely been the biggest turn for me in my career so far.

What does it feel like to find yourself at this place of real success as a comedian right now?

There are a lot of feelings. I feel really lucky. When your life becomes this you have to let go of things and you have to move on and go against the grain of what people think you should be doing. I lost my mom when I was 26, out of nowhere. So not having her here for all these special moments—I feel very lucky but at times I become very emotional about it. It just feels fast. Life feels very fast right now.

It’s funny because it feels like we all had this long pause and now life is moving at top speed again.

It was nice to be inside for that year! I think it’s time we have another year inside. I’m ready. I’m flying back to L.A. next week and I haven’t been there since before the pandemic. When we were cutting The King of Staten Island was the last time. Me and Pete flew out to go watch it once it was locked. It was just me and him watching it in a room and that was the last time I was in Los Angeles. I used to go like two or three times a month!

It sounds like you do have a deep connection with New York City though.

I think that’s why it was so important to shoot here. HBO was really good at listening to my ideas and my thoughts. There were different ways we could have went about this. We could have shot in Miami in November last year. They didn’t care down there! But it was important it was done in New York and HBO was cool enough to wait until it was perfect to do it. And we did it. 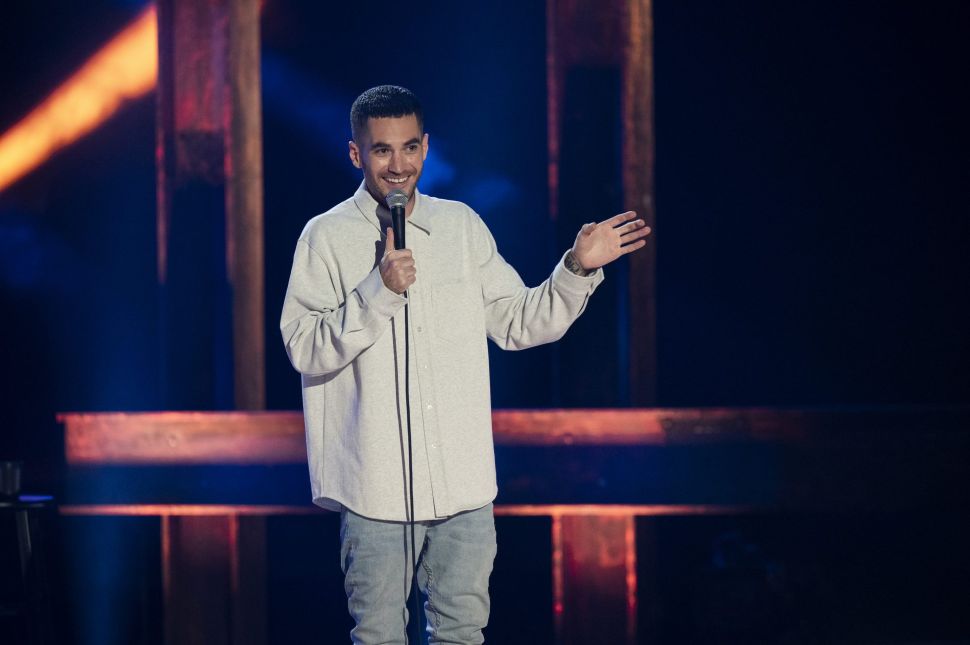