Even with all the money in the world, it’s astonishing to see the Roy family unable to find good therapy. Then again, this group of 1 percenter narcissists would never reach the level of self-reflection necessary for actual internal change. That helps to explain why this week’s main players are so bent on getting in their own way in “The Disruption.” So without further delay, let us dive into this week’s war for Waystar Royco.

We open with Kendall bad mouthing his father and the company to a journalist. He’s shaping a narrative for this profile writer in a painfully transparent way. “You’re quite concerned with how you’re going to come across,” the writer says, which sends Kendall spinning. She asks about his relationship with his siblings, and Kendall’s bumbling response speaks volumes.

Kendall is still licking his wounds after his siblings opted not to join his revolution last week. Not only is that an emotional blow, it also weakens his strategic position. He now faces the prospect of dueling his father without any support. The strain of such a Herculean effort is already weighing on him, as he can’t help but self-sabotage his own ambitions, which becomes the running theme of this episode.

Gerri’s attempting to assert her control over the company as acting CEO, which Logan doesn’t like. There’s talk that Kendall is planning to come into Waystar, which no one on the executive council wants. Shiv offers to scope out Kendall’s motivations while Logan pushes for his children to publicly challenge their brother. His PR team also wants Shiv and Roman to publicly speak in favor of their father, which Shiv sidesteps and Roman agrees to. Logan is still clinging to his non-cooperation strategy with the government, which is increasingly pushing for transparency. “Fuck ’em,” he says.

This is as desperate and untactful as we’ve seen Logan. Operating from a position of weakness, he’s overcompensating. Besides Roman, every individual briefed on his non-cooperation strategy has remarked on how poor of an approach it is. Again, a main character serves as their own worst enemy.

Tom pushes Greg into aligning with the family. He reassigns him to a terrible new offense as punishment for not joining the Waystar legal defense force. Tom admits that he’s seeing a friend for an objective take on the murky situation and offers to fold Greg into the mix.

For all of Tom’s psychological (and sometimes physical) torture of Greg, there’s a small part of him that cares for this black sheep. Perhaps Tom sees Greg as the younger and unformed version of himself—it’s worth asking what the often awkward Tom was like before he began learning the tricks of the Waystar trade and improved his hierarchal standing by linking up with Shiv. Their bond is built on being outsiders in this insular family.

Kendall and his posse of Yes Men are partying in a stretch limo while reading a collection of positive and negative tweets about Kendall. One bad tweet mentions his drug addiction and self-conscious position in the family, which cuts through Kendall’s facade of laissez-faire douchebaggery. They are heading to a big journalist soiree, and Kendall yells “Fuck the Patriarchy” at the press as he walks in.

Here we see Kendall attempting to hide his pain as he feels the sting of what’s happening around him. If he keeps bottling it up, he’s going to explode (which should make for some high-quality television). We also see how he’s continuing to co-opt the progressive social buzzwords of the moment for his own selfish purposes. He doesn’t care about fixing the company, he just cares about winning.

At the party, Shiv advises Kendall not to come into the office and to cool it on the interviews. Kendall apologizes for his behavior when Shiv declined to come on board last week. Shiv says they have the same big picture goals and that she wants to bring change to the company. Kendall smells a trap—and he’s right.

Every exchange between two these this season seems to ratchet up the tension and stakes. Shiv claims to be the morally superior one, but ever since Season 2, she’s had no real problem debasing herself in the muck. Don’t throw stones if you live in a glass house, Shiv.

Shiv then drops by Logan’s home, where Marcia is still negotiating for a better deal. Logan calls Shiv out for her lack of public support. He asks her if she trusts him and she can’t give a confident affirmative. Logan wants to keep Shiv clean of the scandal’s dirty details and admits Gerri’s promotion is just optics. He claims to have no prior knowledge of the scandal.

Again, Shiv offers lip service to the moral path, but her actions are lacking. This is also a good example of how Logan manages to manipulate and control his children in different ways. Prior to the Season 2 finale, he leveraged Kendall’s vehicular manslaughter against him. Last week, he dangled a carrot of affection in front of Connor by calling him his “Number One.” With Shiv, he plays to her ego, emphasizing how much he needs her from an intellectual standpoint. It’s enough to keep her in line . . . for now.

While hosting a party, Kendall throws on a late night TV segment skewering him and decides he wants to hop on the show in a future episode despite the advice of his team. Elsewhere, Tom explains to Shiv that his independent source predicts that Tom is going to jail. They hatch the idea of offering Tom to Logan as the hangman for the scandal, the guy who jumps on the grenade.

The fact that Shiv responds so positively to the idea tells you everything about this deteriorating marriage. She’s always strategizing chess moves in her head, even when she should be acting with her heart. At the same time, it’s not a bad play if jail really is an inevitability.

Kendall, ever the impulsive decision maker, consumes all the negative press he’s getting and decides to go into Waystar. Tom pitches his hangman idea to Logan, who seems very receptive. Greg warns Tom that Kendall is on his way into the office. Logan talks with a White House aide, who makes it clear that Waystar’s pull with the President is waning. Logan tells her that it could get a lot worse for everyone if he’s not given some support.

Logan continues to play hardball with every obstacle that he faces. In the Season 3 premiere, Frank and Carl ran through all the emergencies Waystar has survived in the past. But they both acknowledged that this situation is more perilous than any they’ve ever faced. What worked for Logan 10, 20, 30 years ago isn’t going to work now.

Lisa Arthur, Kendall’s lawyer, advises him not to go into the office, which he ignores. She’s working on his immunity, but he keeps pushing for unrealistic solutions. He also moves forward with going on the late night show. Logan wants to keep him out of the building entirely. It’s a public cluster fuck. Shiv opens up the Waystar town hall meeting with prepared remarks about taking corporate responsibility seriously. But she’s interrupted as Kendall has set up a speaker to blast Nirvana’s “Rape Me” during her speech.

The tit-for-tat between Shiv and Kendall is growing more intense with each exchange. Was it smart for Kendall to double down this way? Prior to this episode, Shiv has been the most open to joining Kendall in taking down their father. Now, Kendall has burned any bridge that might have remained between he and his sister.

Kendall heads to the late night show where he makes a complete fool of himself with the writers. Still steaming from the Town Hall incident, Shiv has drafted a harsh attack on Kendall that references his drug addiction, accuses him of being an absentee father, and having his own problematic history with women. Roman and Connor don’t agree to sign. Her note goes wide and Kendall bails on the show as a result. Meanwhile, the FBI shows up at Waystar. Of course, Logan’s first response is to tell them to fuck off, which is not an effective response to federal agents. Logan comes as close to panicking as we’ve ever seen before Gerri convinces him to cooperate.

The Shareholders Award for the central theme of this episode: Being your own worst enemy. Kendall is self-destructing, ignoring the advice from his various teams and opting for the worst options in service of his wounded ego and psyche. Logan, long accustomed to being the bull, is incapable of handling oppositional forces with a deft touch at a desperate time until he’s dug himself a ditch so deep that he has no choice but to cooperate. Shiv is allowing her own concerns about Waytar’s toxic history, her father’s culpability, and and her inaction through it all to color her decision-making in the feud with Kendall. What an ugly mess.

The “Fuck Off” Award for Best Line of Dialogue: “It’s a mint, you doofus.” The Tom and Greg dynamic is probably the flat-out funniest element in all of Succession.

The Fortune 500 Award for the Best Strategic Play from a Non-Logan Character: Tom offering himself up as the sacrificial lamb to curry favor with Logan. We don’t know how much, exactly, that’s worth. But he’s now positioned as an indispensable element and has leverage over Logan should he so choose to use it.

Quarterly Earnings—Best Pro and Worst Con of this Episode: Best Pro is the escalating war between Shiv and Kendall, which reveals their inner-most insecurities while also existing at the center of the Waystar conundrum. Business tactics as family therapy. Con: Season 3 thus far is starting to feel like a series of status updates with a lot of conversation and not a whole lot of actual movement. Here’s hoping for a bit more propulsion in upcoming episodes rather than just tactical fencing. 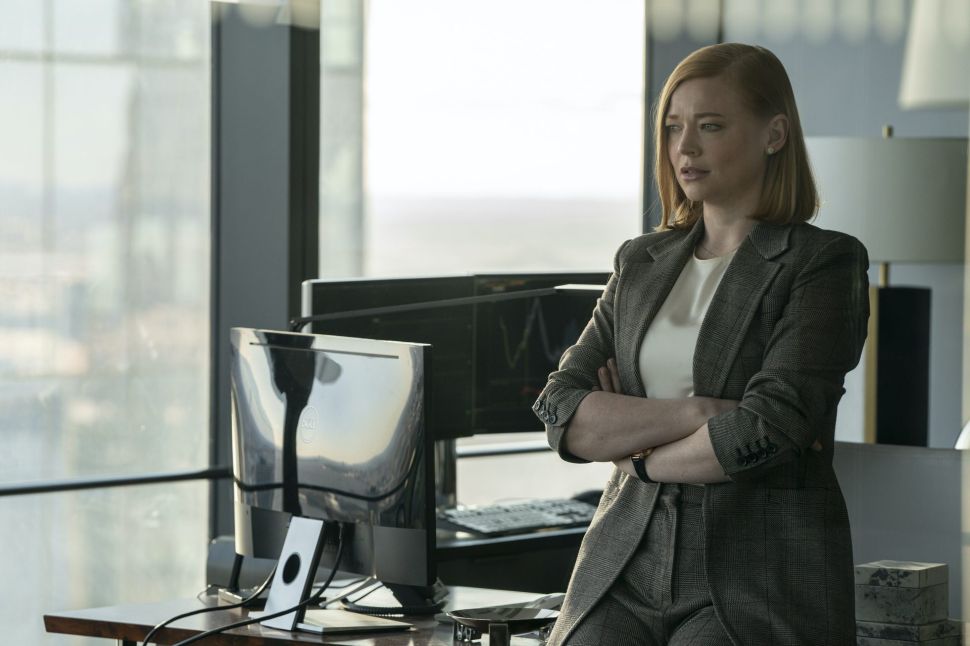