Reader, I used to act. I would trod the boards in weird, experimental plays at Off-Off venues below 14th Street many years ago. Impeachment: American Crime Story years ago. Back then, prancing around La MaMa or the Ontological with a peacock feather sticking out of my butt, it would have been insane to imagine a Broadway transfer. Such a move defied logic, aesthetics, and economics: The work was too bizarre, audiences too dumb, and Broadway producers invested only in tourist trash or naturalistic living-room crap.

Now director Tina Satter’s feminist-queer-deconstructive troupe Half Straddle is performing Is This A Room at the Lyceum on 45th Street and I must conclude that Times Have Changed. It seems younger audiences reared on decades of indie film, social media, and — I don’t know — Adult Swim are ready for the alienation devices and warping filters that avant-gardists have honed for generations.

Not that Is This A Room is inaccessible stuff. It’s a spy story, derived from the transcript of the FBI interrogation of Reality Winner, an ex-Air Force intelligence linguist who — while working for a government contractor — got her hands on a classified report about Russian interference in the 2016 election and leaked it to the press. Winner was confronted at home by two agents and unspecified others, and over the course of a superficially humane but psychologically merciless interrogation, they extracted a confession. Winner (then 25) spent four years in prison and now lives in a halfway house wearing an ankle monitor.

Satter and her company stage the transcript verbatim, each overlapping fragment and stutter, every “um” and “okay” rendered with clockwork precision. In the first 20 or so minutes, a ridiculous (yet believable) amount of time is spent bantering with Winner about what pets and weapons she keeps in house, how her groceries (she was shopping) can be put in the fridge to prevent spoiling. The whole time you’re grimly thinking, the perishables can go in the trash.

The four actors — Emily Davis as Winner, Pete Simpson and Will Cobbs as Agents Garrick and Taylor, respectively, and Becca Blackwell as the slightly bumbling Unknown Male — are pure perfection. Performing with the easy rigor of a world-class string quartet, they draw tense and harrowing music from the source. The translucent Davis is like a raw nerve, glib, tough, terrified, vibrating fast to get herself out of this slow-motion bear trap. Simpson, with a fidgety, gross vibe, makes a simple cough or leaning in a few inches too close a tactical violation, and the handsome, coiled Cobbs embodies both “good cop / bad cop” with steely grace. Then there’s secret weapon Blackwell, zipped into bulletproof vest, juggling walkie-talkies that emit garbled nonsense, as a roving agent who secures the perimeter and wrangles Winner’s pet cat and dog. This hugely charismatic trans actor is like a stagehand who wanders on for comic relief.

It’s as much a dance as a play. We watch, appalled, as the agents casually roll up into Winner’s personal space, then back away, adjust, rotate, and repeat. The 65-minute piece is like a nature program in which a pride of lions methodically stalk and take down a gazelle.

Parker Lutz’s aggressively neutral set is a gray expanse of carpeting with a line of empty chairs against the upstage wall and elevated areas to the left and right. Lighting (by Thomas Dunn) and sound (Lee Kinney and Sanae Yamada) keep us off-balance with washes of magenta and soothing electronic loops that fade in and out. Winner’s scared dog yelps from the lobby behind us. At times we see the scene from Winner’s panicked, out-of-body POV. Then Satter deploys visuals that reinforce the textual: Every time a person says something redacted from the public-facing transcript, it’s a fast blackout. Darkness as a censor bar. When you gaze at Dunn’s incongruous purple-pink lights, soothing and girly-hued, you realize: the stage is the color of a bruise.

Satter is an old hand at orchestrating such deft, subliminal staging. By basing this minutely choreographed and tweaked performance on found text, the director in effect created a live rotoscoping effect — animations created by tracing over motion picture footage, frame by frame. A palimpsest of reality/Reality wriggles and shivers under the distorting effects of manual redrawing. It gives the show the hazy, half-remembered aura of a traumatic event or fever dream.

Found-text drama has an interesting history in downtown theater. Is This A Room is alternating at the Lyceum with Dana H. by Lucas Hnath, which is distilled from hours of interviews with the playwright’s mother (I’ll review that next week). Both of these remarkable shows ran (separately) pre-pandemic at the heroic Vineyard Theatre, the lead producer on this hugely laudable double remount.

They remind me of another legendary found-text play from downtown: Charlie Victor Romeo, which premiered in 1999 at Collective: Unconscious on Ludlow Street and later toured and was filmed. CVR is a hyper-detailed reenactment of “black box” cockpit voice recordings from commercial flights that ended in fatal crashes. More than a morbid docudrama, CVR is a portrait of professionalism and human dignity in the face of amoral tragedy. You could say the same about the lucid nightmare Is This A Room. The gears of the surveillance state (of which, mind, Winner was a part) close around our hapless heroine with almost admirable efficiency.

I was awed by this immaculate machine two years ago at the Vineyard, and it has increased in impact and relevance. What was your reaction to the January 6 Capitol attack? Lock ’em up, maybe? While there’s a world of difference between Winner’s gesture of resistance and a violent, ethnofascist mob, both acts invite the state to drop by your home and calmly, surgically, remove your life. Which crimes born of political conscience are pardonable and which are not? The topic may grow only more urgent in the years ahead. The world is getting weirder by the day. I think the audience is ready for it now. 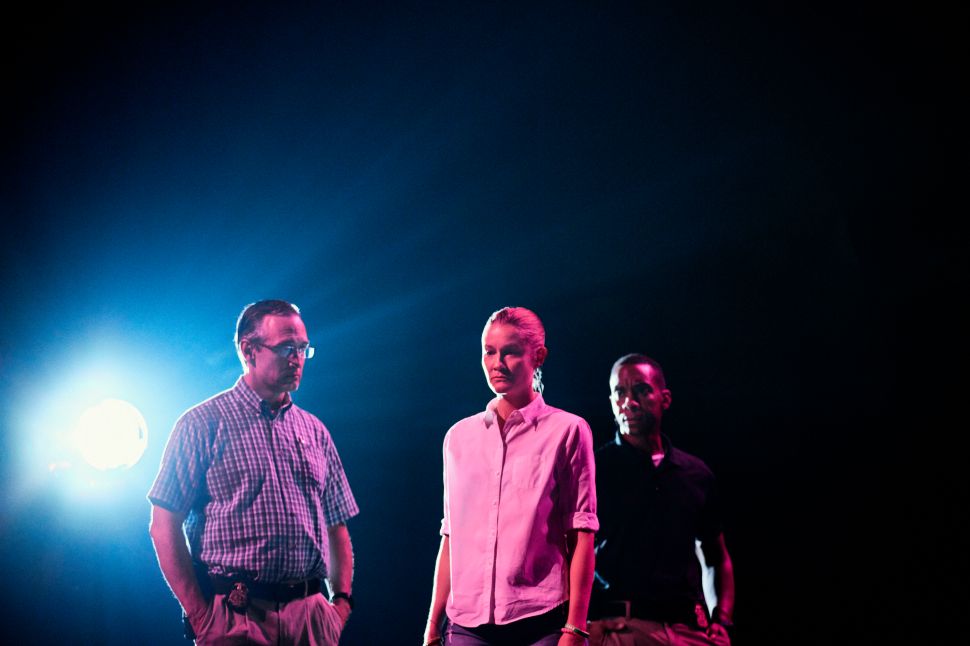