Indoor performances of classical music have slowly begun to return to New York City with September seeing the season openers of both the New York Philharmonic and the Metropolitan Opera at Lincoln Center.

On Saturday night Carnegie Hall’s Stern Auditorium hosted only its second presentation since March 2020 when heart-throb handsome opera superstar Jonas Kaufmann made his first local appearance in nearly three years for a lieder recital accompanied by Helmut Deutsch, his splendid long-time collaborator. His nearly sold-out concert was the first event of October’s “month of tenors,” a striking indication that the world’s greatest voices are once again being heard around the city!

When I arrived Saturday, the line of concertgoers waiting to have their vaccination status checked before entering the theater snaked from Carnegie Hall’s entrance down Seventh Avenue to 56th Street and then around the corner and far beyond the stage door! Remarkably, the performance started only about ten minutes late. Early concerns that older adults would be particularly hesitant about returning to live performances in light of the recent Delta variant surge were belied by the noticeably large number of seniors in attendance.

A beaming Kaufmann and Deutsch entered both in white tie and tails to tumultuous, prolonged applause which joyously returned when the tenor expressed his relief and happiness at being able to sing once again for live audiences. In his brief remarks Kaufmann also mentioned that the evening’s program would feature the fruits of months of study and recording occasioned by the pandemic’s closure of opera houses and concert halls. The first songs of the intermission-less recital were by Franz Liszt, the focus of the pair’s just released CD “Freudvoll und Liedvoll” on Sony Classics.

There was some anxiety that the tenor might not appear as late last month he canceled three performances of La Forza del Destino at his home theater, Munich’s Bavarian State Opera. But, in his first song, the dramatic “Vergiftet sind meine Liebe,” Kaufmann gave notice that he was in excellent voice boldly sending out ringing high notes that filled the large auditorium.

Liszt’s songs, while not entirely ignored, are programmed far less often than those of other lieder masters like Schubert, Brahms and Schumann.

One is most likely to hear in recital the composer’s grand “Tre Sonetti di Petrarca” which Kaufmann includes on his CD but chose not to perform on Saturday when he concentrated entirely on Liszt’s German song repertoire. The nine works offered excellent opportunities for Kaufmann to display his sterling qualities as a recitalist. While Carnegie Hall helpfully kept the house lights on so one could follow along the provided texts, his vividly communicative storytelling during songs likely unfamiliar to most of the audience surely encouraged them to concentrate on him.

Anyone disappointed that Kaufmann wasn’t offering an evening of arias still got glimpses of his “operatic” side in several highly dramatic Liszt songs like “Es war ein König in Thule” (a selection from Goethe’s Faust also prominently featured in Gounod’s opera) and “Die drei Zigeuner.” For them he cranked up the intensity eschewing his usually cool approach to thrilling effect

Many may have been surprised that no intermission was scheduled nor was the program divided into the usual shorter groupings found at most lieder recitals. Only after the ninth Liszt song did Kaufmann and Deutsch leave stage for a short break. They then returned for thirteen songs by twelve composers from “Selige Stunde” (Blessed Hour), the other CD that they recorded during the pandemic.

After the demanding, rarer Liszt songs, the second half offered “chestnuts” like Mozart’s charming “Das Veilchen” and Brahms’s “Lullaby,” as well as one of Dvorak’s “Songs My Mother Taught Me” and Tchaikovsky’s “None but the Lonely Heart.” Kaufmann’s dark burnished tenor and intently earnest manner made these sometimes overly familiar songs sound freshly minted.

While another singer might have placed a show-stopping song like Strauss’s “Zueignung” at the end, he chose to close both the CD and Saturday’s recital with Mahler’s sublimely moving “Ich bin der Welt abhanden gekommen” from the Rückert Lieder. His blissful rendition might have made for a perfect conclusion but the roaring audience wouldn’t let him go.

No fewer than six encores followed including Schumann’s “Mondnacht” and Schubert’s “Die Forelle.” While a Boston Symphony Orchestra concert of the third act of Tristan und Isolde starring Kaufmann was canceled in the spring of 2020, we got a fleeting glimpse of his Tristan (which he performed for the first time on stage in Munich this past summer) with his haunting encore of Wagner’s “Träume” from the Wesemdonck Lieder.

Three more Strauss songs including “Morgen” followed, but the final one was swiftly aborted when Kaufmann angrily stopped to call out an audience member blatantly filming him. “I give you everything” he starkly pleaded but “you break the rules” by recording! His outburst was greeted with loud support from the audience and he began again the resplendent “Cäcilie” whose climactic high note was greeted by the concert’s biggest salvo of bravos. He had by then sung for nearly two hours with scarcely a break.

While Kaufmann’s operatic appearances in the US in recent years have dwindled to a handful solely at the Met, his Carnegie concert was the second stop in a cross-country tour throughout October that will take him to a number of cities in which he’s never before appeared.

While Kaufmann is not scheduled to return to New York this season, several other prominent tenors will be gracing local stages this month. Tuesday night at the Met Anna Netrebko’s husband Yusif Eyvasov tries to solve three potentially lethal riddles when Turandot opens with soprano Christine Goerke as its inscrutable title heroine.

Later in October Klaus Florian Vogt begins a series of rare US appearances in the Met’s eagerly anticipated revival of Die Meistersinger von Nürnberg. Vogt’s unusually plangent and penetrating tenor have won him a fervent cult following in Europe, and his ardent Walther will try to win the hand of Eva played by the rising Norwegian soprano sensation Lise Davidsen in her first Wagner opera in New York.

On October 27th the 92nd Street Y will host two of the world’s greatest bel canto tenors when Lawrence Brownlee and Michael Spyres reunite to offer arias and duets from their widely acclaimed all-Rossini CD “Amici e Rivali.” Their concert, accompanied by pianist Myra Huang, will also be made available for home viewing by the Y for just $20! 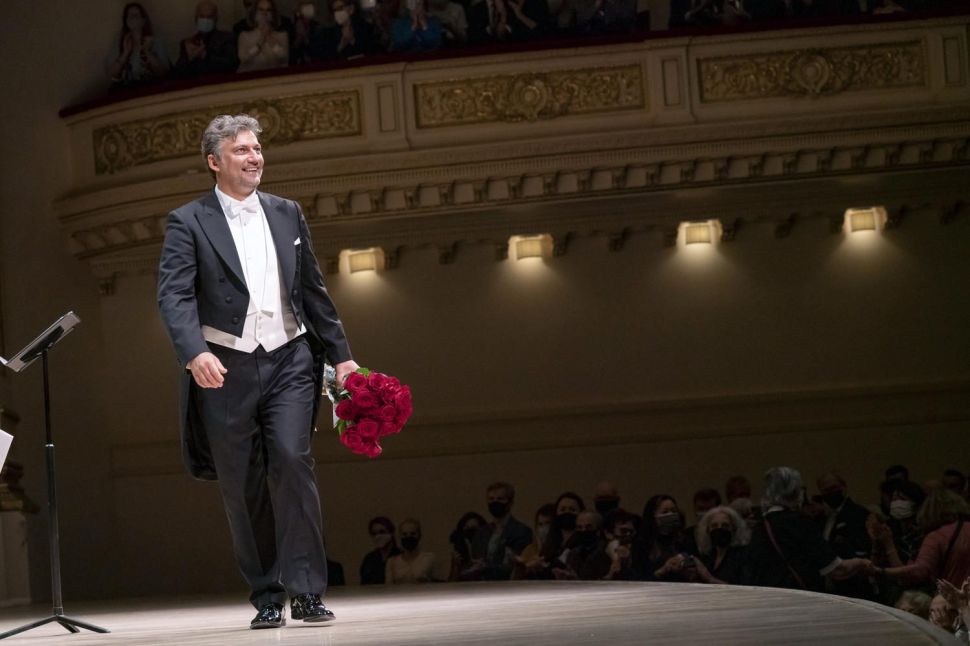