Moving away from the action and horror comedies that have made his reputation, Edgar Wright’s latest feature, Last Night in Soho, finds the genre enthusiast behind Shaun of The Dead and Baby Driver embarking on new territory. Soho is Wright’s first time directing a straight on horror film, his first film headlined by a female lead (Thomasin McKenzie), and his first film where the fashion sense of the characters may steer the focus away from his ever moving camera, thanks to the period and contemporary costume work done by Emmy-award winning costume designer Odile Dicks-Mireaux.

An admirer of the golden age of Hollywood and the style of the 1960’s, Dicks-Mireaux (Brooklyn, Chernobyl) was absolutely delighted to work on Soho from the moment she was handed the script. She not only admired the story written by Wright and collaborator Krysty Wilson-Cairns (Penny Dreadful), she felt that she could truly capture both the style and feel of the 60’s where a chunk of the film takes place in. “I’ve lived in London most of my life so I felt I knew it, had a feeling for it, ” the designer told Observer over Zoom. And, as someone who currently lives in modern-day Soho—a place once known for its sex shops, entertainment and music scenes, but has since been gentrified to a district that features high-end boutiques and restaurants—she pictured both her and Wright simply walking to work each day.

In the lead up to the film’s release, we chatted with Dicks-Mireaux, discussed what went into the film’s most inspiring looks, how performers of the past gave her inspiration for both Ellie’s (Thomasin MacKensie) and Sandie’s (Anya Taylor Joy) style, and her own personal memories of Soho itself.

Observer: You have previously worked on 2009’s An Education, which also takes place in London during the 1960’s. This film shows a much flashier side of London at that time, what kind of research did you do when it came to showcasing 60’s London fashion this time around?

Dicks-Mireaux: Edgar very kindly put together a whole research package for his team. He put about 15 films together, showing where he was getting his inspiration from. I don’t know if I watched all of them, some of them were big movies like [Edmond T. Gréville’s] Beat Girl and [John Schlesinger’s] Darling and [Nicolas Roeg’s] Don’t Look Now, some of them have nothing to do with the 60s, like the 70s italian horror movies that he really likes. He also gave us reading material about Soho at the time and obviously I did my own research as well. Like him, I tend to look at films and the famous people that are around at that time, people that the characters would look up to. For instance, Thomasin would look up to the fashion magazines of the period, because she wants to be a fashion designer; Sandy would be looking more at film stars for her look. Research is fantastic and the prep time, the time when you’re collaborating with all the different departments, is the best.

What was the thinking behind Sandie’s look, particularly the first dress we see her wear early on in the film?

There’s an old Terrance Stamp movie called Modesty Blaize where Monica Vitti is wearing a dress that is very similar. I had to find a dress that would inspire a fashion student to then be able to create a believable fashion show at the end. That was one of my slight anxieties, because ‘60 to ‘65 was very much all about showing a slim silhouette, so that’s where the idea of having an overdress, which was slightly see-through came from. I thought that it would give a student more opportunity to come up with something later on.

We made some prototypes so we could see Anya move, and then we suggested colors to Edgar and peach was our favorite. When he shot the scene of her walking down the stairs for the dance, it was Anya’s idea to flick it up, she really makes clothes work, they both did, it’s nice to work with actresses who own their costumes.

Tell us about that wonderful Mac jacket, which just helps Sandie almost pop out the frame every time she’s shown wearing it.

It was in the script. In Darling when Julie Christie comes back from Paris with Laurence Harvey in a white Mac, I thought, ‘well that’s really nice’ so I put a picture of that on the board as well as a picture of Petula Clark singing “Downtown” in a black Mac. It could have been many different colors. We didn’t want to do a red Mac and yellow seemed too strong, too cheerful, and black seemed a bit boring, in fact it was the production designer [Marcus Rowland] who really liked the white, so we decided to go with that. It was a bit of a challenge for [Chung-hoon] Chung, our  cameraman, and he gave it a kind of ghostly quality to it.

What went into the burlesque outfits, where we see Sandy part of a troupe dressed up as wind-up toys?

Those came later on, because we had to craft all of the costumes for the main story. So once those were done I could concentrate on the bonus things. Edgar wanted a puppet held up with string and he wanted a key in the back of the costume, so that was the main thing we had to achieve. We looked at various films, like Secrets of a Windmill Girl and images of showgirls in the 60’s. I then did some drawings and it was quite good fun. When we had to get to the keys, it was done using magnets, so when they leant over the chair, it didn’t get knocked off, because there are a few moments you can imagine that happened in rehearsal. Edgar was afraid that the puppet on the string would be too glamorous, but I think we got the right balance.

What went into Eloise’s look? When she first goes to London her style is fashionable but more muted than Sandie’s, but as she learns more about Sandie’s life, she proceeds to get flashier as the film goes on.

I went into the art schools and took a lot of pictures of students. Edgar didn’t want her to wear too much vintage, whereas I wore a lot more vintage clothing when I was an art student. When she transforms into a blonde, I used Bridgette Bardot as my inspiration because I wanted her to stay in a ‘60s world. I tried to keep her feeling ’60s even though she was in the contemporary world, that was actually quite harder to achieve than it was her earlier look.

While showing both the good and dark side of 60’s London, the film also serves as a sort of love letter to Soho itself. I wanted to know if you had any personal memories of the area?

Oh I do. I can tell you that I went to art school, it was in the 1970s, and you didn’t really wander Soho after 9:30 I have to say, but I did. I decided to do my thesis on striptease theater, so I did wander around the Raymond Revuebar a little bit doing that, thinking that I was being quite daring. I knew it later in the 80s when I started working in the industry because there are lots of men’s tailors down Varick Street. It was great from the late 70s’ to early 80s’ for costumes because you could get all this brilliant fabric there.

I’ve been working on The Wonder, an adaptation of Emma Donague’s book, shooting in Ireland with Florence Pugh. I’ve gone back into the mid 19th century, which was really nice because I haven’t done that for about 10 years. Just change things up a bit. 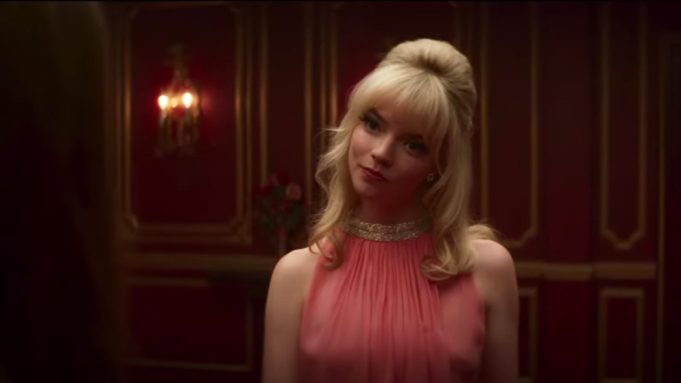